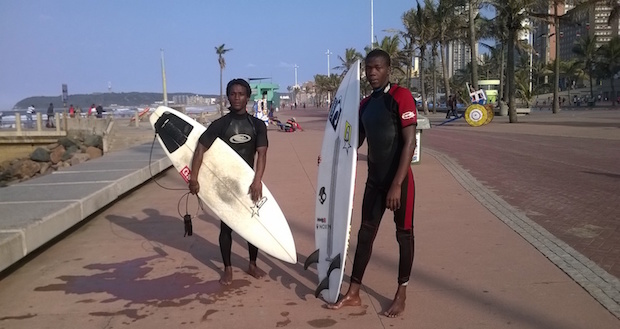 Andile Zulu was once a street kid but surfing changed his life. Today, he teaches others how to surf and uses his story to inspire. He told ZILUNGILE MNISI about how he became a surfer.

Iâ€™ve been on and off the street, most of my life. My mom passed away when I was a baby and I was raised by my single father, who was physically and emotionally abusive. I used to run away from home, on and off, to live on the street. I always ended up at the beach. I was obsessed with the water and I dreamed of being a surfer.

When my father passed away, I had to go stay with my grandmother. But I always felt like an outsider. I eventually left without telling them; I had no parents and I knew my situation would not get any better.
When I left my family, I went straight to the sea, where I could spend as much time as I wanted in the water. I knew that staying in the streets of Point would bring me closer to my dream of being a surfer. But I did all of the things that the street kids do – I sniffed glue, smoked dagga and cigarettes.

I had met Tom Hewitt before my father died, on one of the stints when Iâ€™d run away from home. I met him, randomly, at the beach and we started talking. Tom was running a program called Umthombo Street Children, which provided psycho-social support to street children and, where possible, helped them reintegrate into their families and communities. I told him about my circumstances, and he told me he about their surfing programme.

When I had left home for good, I officially became a part of the program. I still slept on the streets but I could go to Umthombo for food and they offered surfing classes.

Tom later started the program that I am currently under – Surfers Not Street Children. He offered me permanent shelter and Iâ€™ve been involved in the program ever since.

We hold surf classes for other street kids to help them acquire skills and we also teach other people who would like to learn how to surf. We enter competitions too. The competition we enter most often is the Shayi Gagasi Competition, which is for black surfers only and runs every December. We have experience some discrimination. It was hard going to the ocean knowing that there would be funny remarks from white surfers because they thought we were not good enough. We just wanted to have fun but they used to tell us that surfing is not our sport. But we showed them that we were passionate about surfing and we didnâ€™t treat them as they did us.

Surfing keeps me fit and it disciplines me â€“ itâ€™s through surfing that I eventually quit doing drugs.

I think itâ€™s an accomplishment that I am excelling in a sport that was previously known as a sport for white people. Iâ€™m proud of every one of us for where we are now. I now believe that being a street kid is not the end of the world.

To donate to this programme or to inquire about surf lessons with Andile and his colleagues, you can contact Surfers Not Street Children on Facebook.

As told to Zilungile Mnisi; all photos supplied