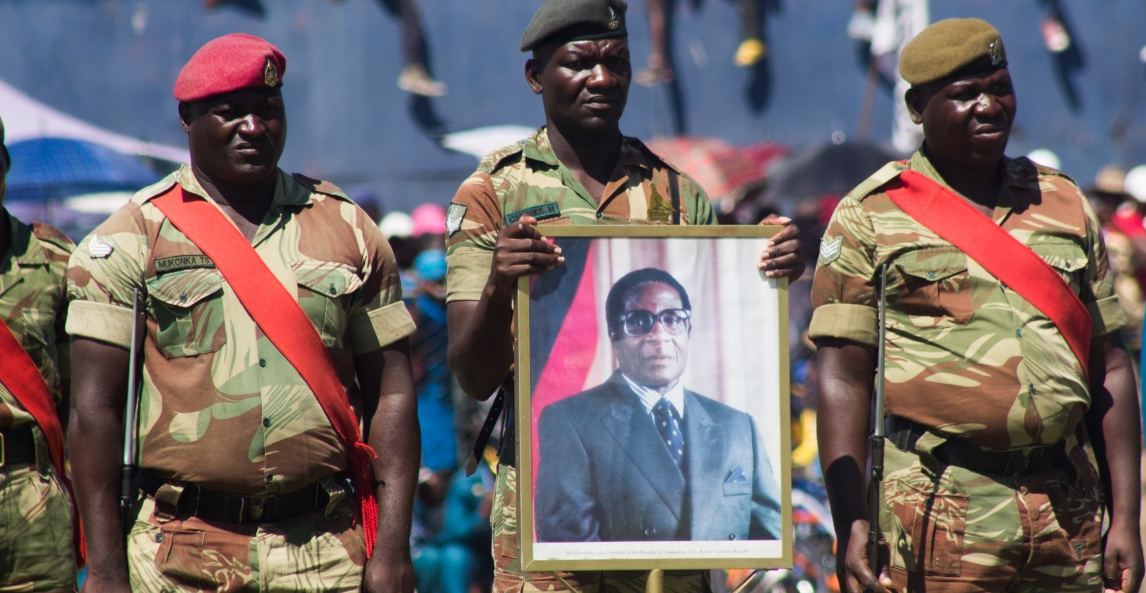 On Tuesday, the Zimbabwean Defence Force (ZDF) moved into Zimbabwean capital Harare, to â€œtarget criminalsâ€ aligned to President Robert Mugabe. Despite that it seems like the beginnings of a military coup, army officials arenâ€™t calling it that. South Africaâ€™s political parties weigh in on the recent developments in Zimbabwe and the way forward.

The Democratic Alliance (DA) party leader Mmusi Maimane issued a statement on Wednesday saying the current instability in Zimbabwe should be a concern for all African countries who stand for democracy on the continent. Maimane said the recent events show the first signs of what appears to be a military coup. However, he said, â€œthe military in politics is never to be celebratedâ€.

Maimane said the situation in Zimbabwe is partly to blame on the South African government under President Thabo Mbeki who failed to enforce the results of the 2008 election, which opposition leader Morgan Tsvangirai of the Movement for Democratic Change won. â€œAllowing Mr Mugabe to remain in office even after losing an election clearly sowed the seeds for what we are seeing today,â€ he said.

The Economic Freedom Fighters (EFF) believesÂ President Mugabe must abdicate political power to the next generation and shouldnâ€™t allow for further degeneration of a country he led to political liberation under his name. â€œZimbabwe has experienced a lot of pain and destabilisation over of the past two decades, lost its currency and displaced millions of its citizens due to economic hardships,â€ spokesperson Mbuyiseni Ndlozi wrote in a statement the party released on Wednesday.

The EFF added that Mugabe cannot rule when he is physically incapable, particularly when opportunists like close relatives and his wife have taken advantage of him and used his power and struggle credentials to purge political opponents.

The party supports the rights of the Zimbabwe Defence Force to protect Zimbabwe from factions opportunistically â€œusing Zimbabwe for self-enrichment to the total disregard of the rule of lawâ€.
It said the ZDF should ensure there is no loss of life during the transition, but should suppress those who try to undermine the long overdue transition. Ndlozi wouldn’t comment on whether this means the EFF supports the coup.

The Azanian Peopleâ€™s Organization (Azapo) said it is â€œtroubledâ€ by developments in Zimbabwe, especially reports that the South African government is supporting the military intervention in the countryâ€™s political crisis.

â€œThe history of the African continent is full of stories of military juntas, where army generals saw it necessary to overthrow elected presidents in order to impose themselves as rulers,â€ spokesperson Amukelani Ngobeni said in a statement on Thursday.

AZAPO said army generals who are initially hailed as heroes for toppling a tyrannical regime soon become a â€œnightmare â€œworse than the â€œdeposed despots and quasi-democratsâ€. History teaches us that when military juntas takes up political power, it is supported by colonialist and other third forces â€œwho could not manage to influence a political and economic direction of a country under a leader that is to be toppled,â€ Ngobeni wrote in the statement. He drew on the examples of Libya, Afghanistan and Iraq.

The African National Congress (ANC) spokesperson Zizi Kodwa told The Daily Vox it is not for the ANC to say whether or not there is a coup in Zimbabwe. â€œWe are concerned about the developments and we are appealing for calm and restraint,â€ Kodwa said.

Both the DA and the EFF have called for free and fair elections in Zimbabwe.

The DA said it calls â€œfor fresh elections to be held in Zimbabwe as soon as practically possible, and for Robert Mugabe to immediately resign as President of Zimbabweâ€. This course of action will allow Zimbabweans to choose a new direction for their country, and to free themselves from the â€œtyrannical reignâ€ of Robert Mugabe and Zanu-PF, Maimane said.

The DA also calls on Minister of International Relations and Cooperation Maite Nkoana-Mashabane to urgently brief South Africa on the nature and extent of the crisis in Zimbabwe, including what action our government will take. South Africa cannot continue with its â€œquiet diplomacyâ€ while Zimbabweans suffer. Maimane wants action that does not allow for â€œanother dictator to take the reinsâ€.

The EFF said the ZDF should be allowed to lead a non-violent transition which will culminate in free, fair and democratic elections, and respect the autonomy of the judiciary.

â€œIt is high time that Zimbabwe transits to a post-Mugabe era and all progressive forces all over the world should support the transition,â€ Ndlozi said. He added that we have an obligation to protect Zimbabwe from further degeneration.

The EFF also called on the South African government to prepare to welcome President Mugabe for political asylum so that a peaceful and stable transition can indeed take place.

Azapo is also calling for elections, but like the ANC, call for the urgent intervention for regional body Southern African Development Community (Sadc).

The African Union (AU) also needs to intervene, Azapo said. It condemned any military intervention in a political process. It wants the immediate cessation of military rule in Zimbabwe, AU security forces to arrest the army bosses who toppled an elected leadership, and the appointment of â€œcare-taker (transitional) leadershipâ€ that should facilitate national elections within six months.

Kodwa said while ANC appeals to Sadc â€œto provide leadershipâ€, the party cannot prescribe what ought to happen in Zimbabwe. â€œItâ€™s not for us, itâ€™s for the people of Zimbabwe to decide what is best,â€ Kodwa said.