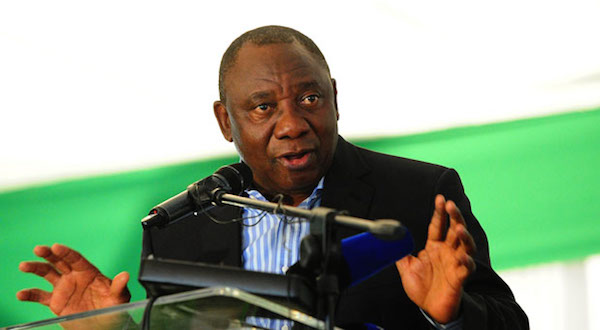 Deputy President Cyril Ramaphosa played peacemaker in Parliament on Tuesday when he met leaders of opposition parties to discuss the chaos in the National Assembly last week.

Clashes over Nkandla involving an EFF MP brought the house down on Thursday. Controversially, riot police were called in, a scuffle ensued and the parliamentary television feed was cut.

Speaking to City Press, the Right to Know Campaign criticised what it called the censorship, silencing, and brutality at the hands of the police saying â€œThose behind the public order policeâ€™s intervention in the National Assembly and the suspension of the parliamentary TV service must be held accountable.â€

According to the M&G, Ramaphosa told MPs that Parliament needed to function in order to maintain the respect of the public. â€œThey must see Parliament as a forum where their leaders get together to discuss matters of national interest,â€ he said.

The tensions running through the benches were diffused with a plan to set up a multi-party committee, led by himself, which will discuss the application of Parliament’s rules and provide guidance on how to deal with the recent disruptions, including the incident in which EFF MPs disrupted Parliament by chanting “Pay back the money!” and refusing to stand down when requested to do so.

â€œWe have agreed that we are going to address various matters that have occurred in the past, matters that have to deal with application of the rules and matters of principle. The current processes with respect to the earlier disruptions in the House will be held in abeyance until the committee has completed its work,â€ Ramaphosa said.

He also asked for MPs to stop shouting insults at each other and to “engender the spirit of congeniality and proper debateâ€.

It is not clear how President Jacob Zumaâ€™s purported call toÂ Â “crush” opposition parties in Parliament will mesh with Ramaphosa’s aim to “strengthen” working relationships between parties.