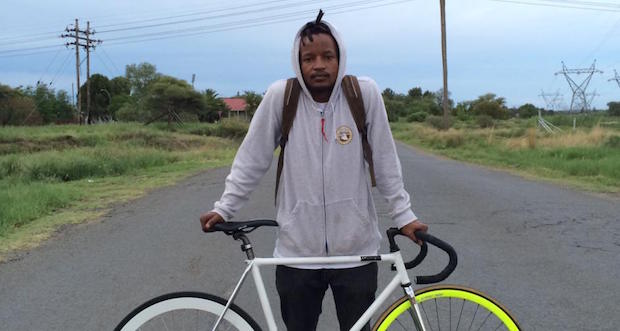 Skateboarder WANDILE MSOMI has been bitten by the cycling bug â€“ so much so that he now cycles to work in Joburg. He tells us about how a skateboarder came to embrace the bicycle as his primary mode of transport.

I have been cycling regularly for two years now. The energy that it takes to ride my bike every day excites me. There are many reasons why I started commuting everywhere with my bicycle: the first was my girlfriend, who has been riding longer than I have.

Another reason is that a car is stressful and I hate driving. There are also the corrupt traffic officers and the fines and the ridiculous charges on your car service. I really canâ€™t believe that I used a car for so long.

There is so many disadvantages to driving: the sound of grinding gears, the energy people exchange driving (you know what Iâ€™m talking about), the accidents, the breakdowns â€“ itâ€™s not healthy for oneâ€™s mental and physical being. I was also a professional skateboarder for so long and keeping the mind and body moving has always been a priority. So cycling was the next logical step.

Some of my family and friends hate the fact that I cycle. My parents in particular have stopped complaining, but I hate that to see them, I have to drive to them, which makes them feel better. So unfortunately I donâ€™t see them as much as I would like.

I love cycling in the CBD â€“ it is amazing! The lines, the angles, the human traffic, the way people just cross the road without looking, the way taxi drivers compliment or insult you. Itâ€™s like surfing through people â€“ like a long wave of people.

As much as I love cycling, I enjoy commuting in the mornings because I have to deal with drivers that are late for work. I also see people who hate bicycles on the road and they express it by throwing funny energy at you.

Sometimes youâ€™ll see other bicycle commuters and they donâ€™t wave or say â€œHiâ€, especially the roadies and mountain-bike humans. I guess when cycling some people like to mind their own business and I have to learn to respect that. But I do think a friendly greeting can make a day better for everyone.

Every day is an adventure as I sit on my bike moving my neck about like an owl. Cycling has been beneficial to me: I am stronger physically, and my skateboarding feels a lot better these days. Since I started going on group rides I have met some of the most amazing humans.

Johannesburg is a tough city to ride in and it can be dangerous at times. I have been hit by a car already: we were on our way to Soweto, and this dude just ran into the back of me and a friend. For five days after this incident I did not ride my bike at night. But I have earned my stripes and I feel more confident on my bike as a commuter.

Johannesburg is so huge and thatâ€™s why I like it â€¦ I mean, when you get to other towns in South Africa, I have people telling me that we are not going to cycle 40km for a commute because itâ€™s too far. But in Johannesburg itâ€™s easy to do that, running from one meeting to another, shopping for the right foods, going out with friends, getting to work.

But Johannesburg has a lot of work to do to make this city friendly for bicycles. I really would love better lanes and they are coming. I have heard that the city is going to spend R250-million in two years on cycle lanes. I wonder if they are going to allow skateboards?

A version of this story appeared on the Johannesburg Urban Cyclist Association site. Additional reporting by Pontsho Pilane.

This story has been translated into isiZulu. Read the Zulu version here.