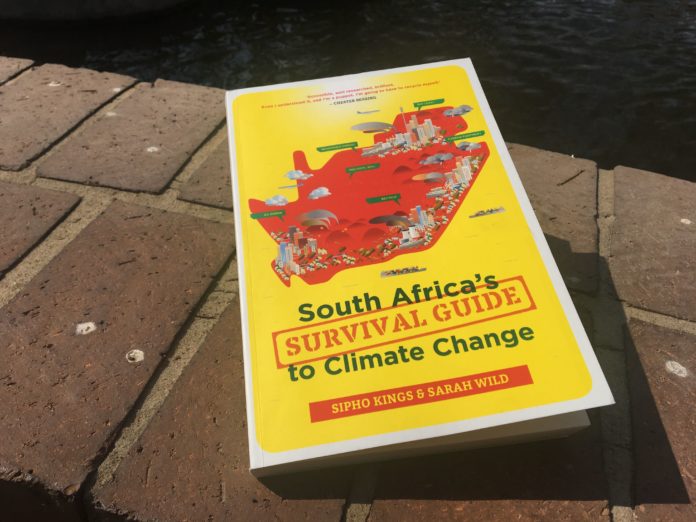 South Africa’s Survival Guide to Climate Change by Sarah Wild and Sipho Kings is a new book aiming to make the scary impending doom of the planet less scary. Okay, not really. The book does tackle the scary present and future that changing climate patterns are bringing to the planet. This is a reality no one can ignore (unless you’re an American politician). This book “rests on the idea that we could possibly survive a changing climate.” (and how to do that)

These climate patterns changes are catastrophic. An increase in one or two degrees to a regional climate is alarming but understandable. However, increases in the global climate is a major cause for concern. The increases in global temperatures have meant everything is changing. The ice caps in the Arctic and Antarctic are melting ever faster as global temperatures increase. The oceans are becoming warmer which means more tropical cyclones and natural disasters are hitting coastal cities. Not only is there an increase in natural disasters, but their impacts are also greater and more disastrous.

All of these things are happening daily in front of us. But the question is what can we do about it?

The book is divided into three parts. There is a “survey the terrain”, “real and present dangers”, and “maak ‘n plan”. Each part of the book deals with a different climate change concern. In the first part, the authors lay out the problem. They look at the current effects of climate change, and what South Africa will look like if no action is taken. There is an in-depth look at what the government and other organisations are doing to address the issue.

A particularly interesting chapter is about why it matters the policies around climate should be localised. Many of the conversations around climate change have been about what governments and international organisations need to be doing with regards to policy change. Yet it is far more important that policymakers understand the local conditions when craftings ways to tackle climate change.

The two other parts look at how climate change is affecting South Africa and what are we doing to worsen the conditions of it. This includes food wastage, transport pollution, and alien invasive plants. All of these actions contribute to worsening the effects of climate change. The final part is what is required by South Africans to tackle this issue. This includes changes at home, being ethical consumers, and how to bring the issue into the political space.

What the book does well

The survival guide claims to have the answers. It is set out in a way that lays out the problem facing South Africa and then goes through the solution. Picking up the book for the first time, I was a little apprehensive. Climate change in the media and academically is often spoken about in high terms which is not accessible to the ordinary person. However, my fears were soon allayed.

The book is easy to read and accessible. There are cool popup boxes that explain difficult concepts. Informative graphics make certain useful points. The advice given is not patronising and is simple to follow.

At the beginning of the book, the authors lay out a disclaimer. Even while they agree that climate change is the biggest threat of modern times, they don’t agree on some things. At the end of the book, they explain where they differ. It’s whether people should panic or not about climate change. Panic can be a good thing. It can galvanise people into taking action. Yet, it also causes rash decisions – worsening the situation.

There is no one solution to climate change. But if you’re feeling helpless and scared, this book may have some answers. It doesn’t have all the answers. That would be impossible for any one book. But the biggest takeaway from the book is the need to do something. There is nothing more important than the first step.

That message alone makes this book an essential “guide” for all South Africans.