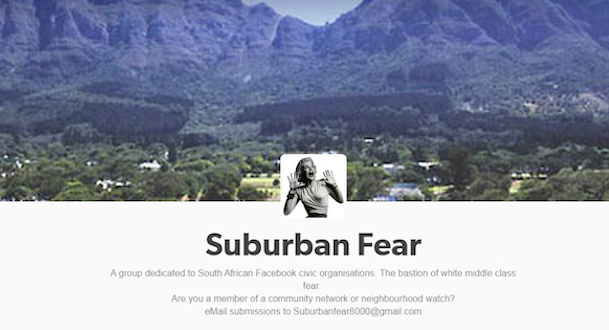 A local Tumblr account, Suburban Fear, highlights just how common racial profiling is in the community forums and neighbourhood watches of South Africaâ€™s suburban neighbourhoods and how self righteous volunteers proudly speak of “taking back the streets” as they continue to enforce informal apartheid in South Africa 20 years after democracy.

The site is dedicated to reporting on neighbourhood watch Facebook groups which it describes as â€œthe bastion of white middle class fearâ€, where racism and hate speech disguised as concerns for community safety and the fight against crime bleed through on a regular basis.

Members of the Facebook groups report on non-white people passing through the neighbourhood who they deem to be suspicious looking, describing them variously as â€œbravoâ€ or â€œcharlieâ€ – for black or coloured – or â€œmonkeysâ€. In many of the posts, passersby are singled out merely for walking down the street or sitting on a curb. Others passing through the area are singled out for driving while black.

Speaking to the Sunday Times, Media Monitoring Africa director William Bird said that the use of racial codes on social media alerts is on the increase.

And here I thought that fear of the Swaart Gevaar has ended. Hard as it may be to believe, there are still people in this country who believe certain areas are out of bounds for black people. Even when taken to task by some members of the community groups, there is no sense of remorse from the “concerned” citizens.

With this kind of mentality the recent spate of assaults on people of colour in Cape Townâ€™s leafy suburbs seem hardly surprising.