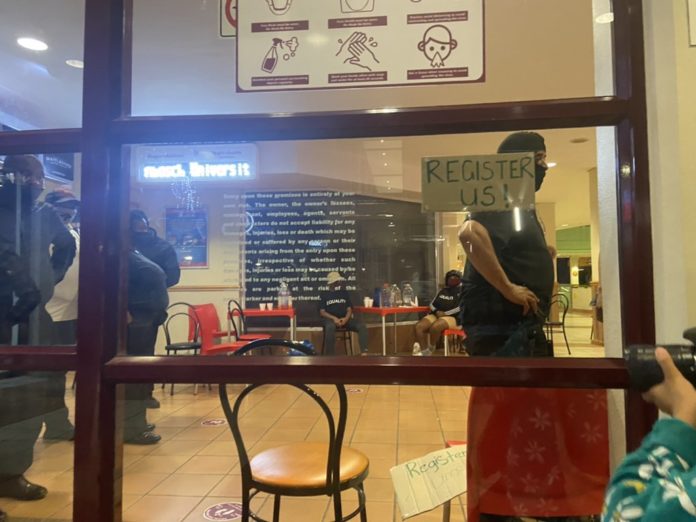 At the beginning of this week SAUS (South African Union of Students) declared a national shutdown from March 15 until all their demands are met.

The demands of students differ across universities. At the University of Cape Town (UCT), the SRC wants: student debt to be cleared and NSFAS issues to be dealt with swiftly. There was also a call for the Higher Education Minister, Blade Nzimande to resign. As of today 19 March UCT has lifted the fee blocks to allow students to register. Students insist however that the struggle continues for FREE DECOLONISED education for all, and the complete erasure of historic debt.

Stellenbosch University sought alternatives to a shutdown this week. Approximately 543 students were identified as having debt that barred their registration, and have sought to have this cleared. Stellenbosch SRC Chairperson Xola Njengele stated this at a mass meeting on 16 March on campus. Njengele told students that a shutdown will be putting at risk majority black students. See full the meeting address here.

On Wednesday 17 March some Stellenbosch University (SU) students shut down and occupied the Neelsie student centre to show solidarity with the national student financial crisis. The SRC met with the students and university management and a consensus was reached.

The Wits SRC has also called on students to apply for the Wits Hardship Fund. The fund is to provide assistance with registration and Accommodation as a result of their socio-economic circumstances.

On Thursday, 18 March The University of Johannesburg (UJ) SRC released a statement about continuing the #NationalShutdown.  UJ SRC cites the poor administration at NSFAS  and the presence of private security on campus as major problems. The latter and the victimisation of seven students being banned from campus are also addressed.

Tshwane University of Technology (TUT) SRC did not join the shutdown this week, as students were still busy concluding the 2020 academic year. TUT SRC Chairperson Mike Mothiba has stated TUT students will join protest action next week against financial exclusion.

The University of Venda SRC  also announced they will not be joining the national shutdown because its students are not yet done with the  2020 academic year programme.

Rhodes University continued protest action on campus this week. The Vice-Chancellor Dr Sizwe Mabizela and the SRC President Lebhogang Nkambule will be addressing the student body today at 15h30.