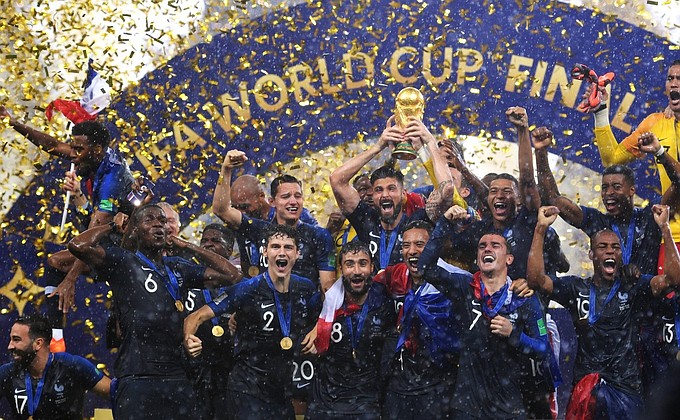 “Why are you supporting France in the FIFA World Cup? Because of Kylian Mbappé? But France committed/commits atrocities in Africa” If you exist in the sort of left-socialist continuum of online, you will have come across some variation of this statement after France won the 2018 FIFA World Cup on Sunday. It is impermissible to feel any sort of positivity towards France because of its history, it is said. But consider the smile on Yeo Pogba’s face as she held the Jules Rimet trophy aloft. Consider what it means for the Pogba family, and then ask again if it is the right thing to support France.

The trouble with the FIFA World Cup is that it reifies nation-statehood identity, a concept that is fast losing any sensible meaning in a world where migrations in all its forms is blending the global community. You may play football for France, and your parents may have been born in Cameroon, or Mali, or the Democratic Republic of Congo. Indeed, the composition of the French squad that won the cup is a telling – and indelible – mark of migration, in all its forms.

Immigrants and minorities who

“change our culture” so we can win football matches are ok, it’s just the other ‘invaders’ we don’t like ðŸ¤” @Okwonga @nikeshshukla pic.twitter.com/ePBIPsLbiv

The concept of ethno-nation-statehood may be making less sense these days, but it is a ripe source of European political intrigue at the moment, as vast swathes of racist Europeans attempt to halt the tide of migration, with the oft-stated goals of keeping these ethno-state identities. You must be a Gaul to be properly French, and so on. (In other words, you must be a white Christian to be properly European. The theme has variations depending on the country.)

Igor Å timac, the former coach of Croatia, put it indelicately in a now-deleted Facebook post, in which he asked “who exactly are we playing against in the final”, before listing various French players and their African countries of origin.

This anxiety appears to be limited only to the black French players: the French left fullback Lucas HernÃ¡ndez is of Spanish descent, and has lived and played in Spain pretty much his entire life. The captain Hugo Lloris too, is of Catalan descent. However, they are always missing from these lists of French players of migrant extraction…

Steve Jobs’ father was a Syrian refugee. It would seem that nationality has nothing to do with the ability to succeed. If you think that being an Nigerian means you can’t succeed then you won’t. If you fight and you do succeed you will be a role model!

Writing in Africa is a Country, the excellent Grégory PerriotÂ encapsulates what it is like to grow up black/brown in France:

“Growing up in the 1980s, there were few places where French flags were acceptable: government buildings, sporting events, right-wing and fascist meetings. And that was about it. For lefties like me, waving the flag was an act of political aggression. For a Frenchman of West Indian descent like me, waving the flag was also source of special ire, because Iâ€™d grown to know that no matter how French I actually was, no matter how well I knew French history, how well I spoke or wrote, how beholden to French values of libertÃ©, Ã©galitÃ©, fraternitÃ©, how connected to culture I was, there would be Frenchmen to fly the Drapeau tricolore in my face as a reminder that for them, against all aforementioned values, my skin alone was proof that I would never quite be French. All of this was both sublimated and exacerbated in football games where black and brown people were especially visible and worshipped by fans who would just as soon spit racial slurs at them.”

Africans: We supporting France cause they’re just another African Team

World: Haha no they’re not

To know this, to know of Marine le Pen, to know of the discrimination of black French people, to know of the hard life in the banlieues of Paris (made so by political design), and to know that France still extracts a colonial tax from Africa, it can be too much. The right and rational response may be to spurn the French state in its entirety: France is Emmanuel Macron telling Nigerian people earlier this month to “get over” colonialism as if it is just a nasty summer flu, it is the Front National and it is the French state’s ugly exploitation of Africa. I wouldn’t begrudge you that viewpoint.

There is another. It is to be found in the defender Presnel Kimpembe’s raucous and joyous Instagram videos: French players of all extractions dancing together to the tunes of Naza, the French hip hop star of Congolese parentage. Or the adoration that the entire French national set-up has for the improbably shy N’Golo Kante. Or maybe seeing Benjamin Mendy teaching Macron how to dab. I am particularly transfixed by the Pogba family.

During the on-pitch celebrations after the final whistle, photographers caught several moving images: Yeo Pogba, surrounded by her three sons (including Paul, who scored in the final), is holding the Jules Rimet trophy. The look on her face is of pure, unbridled joy. Her son really did that. Some on Twitter juxtaposed that image with another, taken many years ago, showing her with her young sons, in a setting that may be described as genteel poverty. Side-by-side, the images speak for themselves. This is a family that has conquered obstacles others would crumble in the face of, to earn the right to represent a country that hasn’t always been favourable to them, on the world’s biggest stage. The meaning of it all is in their faces. This is a triumph.

To see the Pogba family like that – and yes, all the other French players who aren’t really French in the eyes of many French people – is to understand how utterly uncomplicated this is in the end. Yes, France has perfected the art of forcing extra-human achievement out of its immigrant community before allowing it into full ‘Frenchdom’. Yes, the fascists. But who would dare tell the Pogba family that their skin colour somehow makes that moment less?

I’m glad that the colonial state of France won the World Cup. Not for Macron, or Le Pen, or those who can never wait to sneer at the black players when the French don’t do so well in football. But for Pogba, Kante, Mbappé, Kimpembe and all the other black French players. Maybe black solidarity in this moment needn’t be anything more than seeing this victory for France through their eyes.