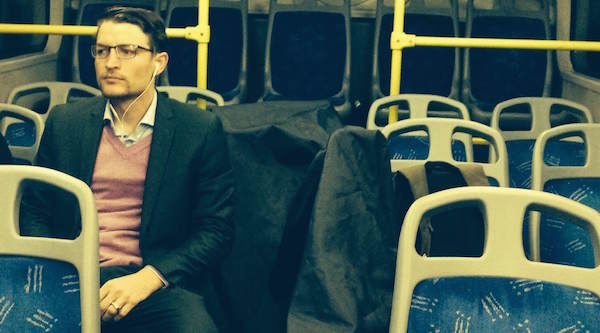 Believe it or not, you actually can take a bicycle on the Gautrain. You just have to hide it away in a bag.

“Why?” you ask. Apparently it’s for “safety reasons”. If the bicycle goes flying through the air when the train comes to a mad emergency halt or goes off track then the bag will have some safety purpose. I can’t understand it either, but this is actually an explanation given to a friend of mine by management, who insisted that he put his super fancy fold-up bicycle into a bag.

I find the bag is not useful for much other than drawing stares, being somewhat of an inconvenient and peculiar bicycle draping and allowing me to squeeze any part of the bike up close and personal among a crowd of Sandton business types that have squashed into the elevator.

One time, while sharing a lift with some well-wheeled luggage a woman exclaimed: “My! You must have something very interesting under there!”

“No,” I replied. “It’s just a bicycle.” I pointed to their luggage and said: “I’m sure you’ve got far more interesting stuff in there!” I first discovered this bicycle bag rule when I confidently tried wheeling my bicycle onto the railway platform. Security would have none of it. You think chewing gum or accidentally opening of bottle of water is a felony on the Gautrain? Just try bringing a bicycle on board. So much for promoting and developing an integrated transport system and making bicycles at the top of Gauteng’s transport strategy.

What’s strange is that you can wheel many other items on board a Gautrain – prams, luggage or a wheel chair – all without a bag. And, when those items get airborne I’m sure they’re going to do as much damage as my bicycle. (Except maybe for the wheel chair.)

At any rate, I comply with the rules. I made a large black sack that I can just haul out and throw completely over the bike. The alternative would have been to take the wheels off, and there’s no way I’m doing that. I’m trying to do an efficient, breezy commute here, not a whole procedure in bicycle mechanics.

(I once met this guy with his bike packed away, wheels off, in a snazzy bag. He was in full lycra and told me his commute from Centurion to those fancy FNB offices in Randburg took the same by Gautrain and bicycle than by car. I was well impressed. He was also training for single speed off road champs. Respect!) So in goes the bike, in it’s big black Batman bag, if you will and I have to carry the bike which may be quite a strange sight, but at least it is not an alarm starter for the Gautrain security guards. They just look past me dully, it’s quite peculiar. They really seem in a daze unless you’re setting off their rule breaking alarms. I have even seen them stop a guy from entering the station because he was carrying a skateboard. It’s amazing! But I have yet to try wheeling my bike onto the platform and only then putting it into a bag.

So, what’s it like catching the train with a bicycle? It’s a bit of procedural hassle and you get the sense that you’re sticking out like you would if you tried catching a flight with a coffin on wheels for luggage. But I do it as much as I can because it’s worth it.

It’s a commute that’s precise – no chance of car accidents or blue lights. I must be out the flat and cruising down the hill to Park station by 06:00, bag the bike and hit the platform for the 06:12 train, out at Sandton and in the lift, in the bus and down the road. Up a short hill and I’m at the office before the 7am clock in time.

That’s about a third of the length of my vehicle commute. It’s not only precise, it’s also meditative – I’m never actually stuck in traffic – I’m weaving in between traffic on my bicycle, I’m speeding underground on the train or relaxing on the bus. I get to work without being too hot and sweaty and the bonus is that at the end of the day I can ride all the way home, which is the most precise and meditative part of my day. John Luke Hutchinson loves living in cities and being quiet in nature. He doesn’t know how he’s going to explain Facebook and climate change to his kids. He loves riding and has been riding a bicycle since back when it was safe to let your kids loose on Jo’burg’s streets. Follow him on Instagram.

A version of this story was published on the website of the Johannesburg Urban Cyclists Association.