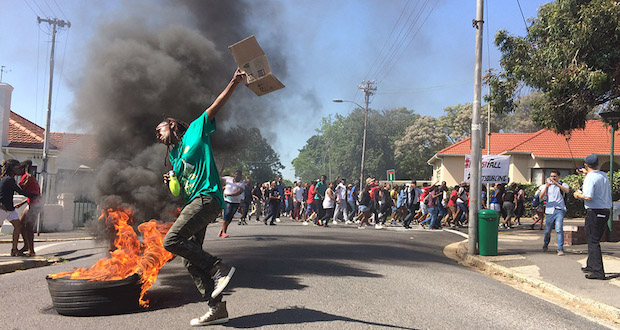 What began as a protest against fee increases and outsourcing has now taken a new turn. While students involved in the UCT shutdown continue to fight for affordable education and insourcing, the actions of UCTâ€™s management have added a new focus to the protest: the police. RAâ€™EESA PATHER reports.

When Alex Hotz, a student at UCT, was marched into a police van on Monday night, she went peacefully, shouting â€œIzwe lethuâ€ (our land) and â€œFree education!â€ This is the crux of the student fight: the right to higher education and a living wage for workers. But UCTâ€™s management has failed to engage with students, choosing instead to approach the protests with a court interdict. Their actions have shifted the trajectory and intensity of the protests they sought to stifle.

On a scorching Tuesday afternoon, students traversed around 18km of Cape Townâ€™s streets to continue their fight against UCTâ€™s 10.3% fee increase for 2016 and the outsourcing of workers on campus. Not even Blade Nzimandeâ€™s 6% cap on fee increases could temper their demand for free education.

But they were also focussed on the events of Monday night where police, carrying out a court interdict, which UCT had sought for the removal of the students, fired teargas and stun grenades, injuring one student, and leading to the arrests of at least 20 others.

Those who were detained were taken to Rondebosch Police Station, sparking a march through the streets of Rondebosch. On the first day of UCTâ€™s shutdown, students were already taking to the streets outside campus. Their off-campus protest was ignited by managementâ€™s actions.

â€œWe engaged you peacefully, we did not hurt you, we did not touch you,â€ a student told UCTâ€™s acting vice-chancellor, Francis Petersen, when news of the court interdict reached the protestors.

The students claimed that management was acting in bad faith, using intimidation tactics as a response to the peaceful protests. While Wits vice-chancellor Adam Habib had set the tone in Johannesburg by sitting with students and calling an emergency meeting, UCTâ€™s management had used the police to avoid engaging with studentsâ€™ demands.

Academics who were at the Bremner building on Monday night said that police informed them that management had â€œordered them to use force on students, including rubber bullets and teargasâ€.

â€œThis use of force and lack of engagement with activists contradicts the efforts to build a cohesive space for dialogue on campus,â€ the UCT Black Academic Caucus said in a statement.

UCTâ€™s response to the student campaign has been clinical and marked by a lack of dialogue. Since the protests began on Monday morning, Petersen has only met with students once. On that same Monday, the University of Cape Town called police on students, demonstrating the lack of engagement on managementâ€™s part.

â€œAfter what happened yesterday, the main task of the management of the University of Cape Town is to bring the normal operations, the normal business, of the university back to where it should be,â€ Petersen said in a video statement on Tuesday.

But students believe that disruption is now more important than ever before. The police action on Monday was a blow to the little trust they had in management, leading them to believe that UCT was acting unjustly with violence against peaceful protestors.

â€œWhen injustice becomes the law, resistance becomes the duty,â€ said Athabile Nonxuba, a student in the UCT PASMA organisation, who spoke at a student meeting at the Bremner building on Tuesday. On Tuesday morning, students and workers blockaded the university with burning tyres and shut down Main Road, Rondebosch, one of Cape Townâ€™s busiest streets. They held placards saying, â€œWhy am I being arrested?â€ and â€œArrest me again IDC!!! [I donâ€™t care!!!]â€ More than 1,000 protestors descended on the Rondebosch police station, and throughout the day, students played a police siren through a loudhailer to mock police.

The students havenâ€™t forgotten their fight for the right to higher education and an end to outsourcing. But the actions of UCTâ€™s management has fuelled their determination to continue disruptive protests. It has also changed the trajectory of the movement, igniting them to move beyond the confines of campus and spill out into the streets against police violence.

â€œIf you are meeting us with violence, this is exactly how the country is going to be for the next couple of weeks,â€ Masixole Mlandu, a student from Rhodes Must Fall, said at the student protest in Main Road, Rondebosch.

Students insist they will be disciplined in the face of police action and are determined not to be provoked into the narrative that they are violent protestors. But as the protests continue with no dialogue, the question remains: how can students and management engage when teargas and stun grenades are a response to protests?