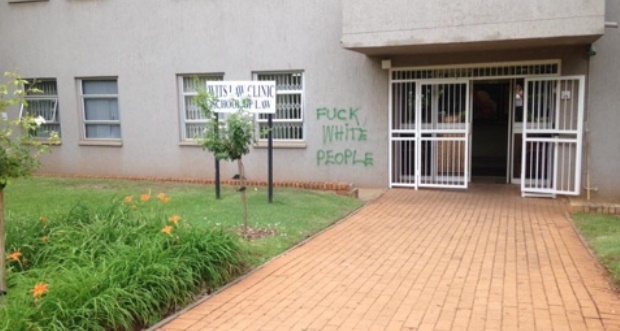 I have been avoiding the increasingly shallow “White Privilege” discourse that has been plaguing online mediums in the last couple of months. I have always been cautious of the obsession with the word “privilege” with its perceived softness aiding the desperate attempts white people keep on making to separate this privilege from their â€˜selfâ€™- the â€œyes I am privileged but that doesnâ€™t make me a bad personâ€ discourse. There is nothing soft, or subtle about the way whites live in this country, and the world. It is a sickening, violent reality and I have always believed privilege was too soft a word to accurately describe this brutal existence.

The question and answer session at the 2015 Ruth First Lecture, held at the University of Witwatersrand every year, took an unexpected turn when the young black radical, donning a recognisable red beret, grabbed the microphone from the facilitator and began shouting â€œfuck white peopleâ€. The moments after his proclamation seemed to hang, suspended in the air, as the emotions of the whites in the Great Hall made the progression from denial to shock and finally outrage. It is unclear whether the program was originally planned to end then or whether it was a damage control decision to curb the attention away from the droves of white students and academics walking out the back door. Though Mbheleâ€™s declaration was a remarkably precise disruption, the most interesting part of the engagement transpired later that night on what has now been termed “Black Twitter”; a pop cultural phenomenon formed on the online social media site that engages fiercely on issues of interest to the black community. It was here that thousands of black students, professionals and public intellectuals from around the country began to comment and engage on what had happened earlier at Wits. The general summation: â€œ#FuckWhitePeopleâ€.

The following days saw reams of Facebook posts, think pieces and newspaper articles from white people expressing not only their anger but their deep â€œdisappointmentâ€ in young South Africans, unable to understand how blacks, especially the so called “born-free” blacks, could still think this way. The old Wits “lefties” spewed outraged at the continuously indulgent focus on race and the divisive nature of such rhetoric. This was not a new conversation though, 2015 was defined by “Race Talk” as young black people collectively begun to disturb the sleeping monster of Whiteness in South Africa. The UCT Rhodes Must Fall student movement has rapidly begun to shed light on the many foggy aspects of South Africa’s broken society with one thing becoming increasingly obvious; Whiteness is no longer able to sleep comfortable and ignorant in its privileged bed.

Though somewhat unsurprising is the violent obliviousness that white people hold onto so passionately, refusing to truly recognise the evil that lurks within us, determined to block our ears, ever so tightly, when blacks confront us with their (and our) deepest truth.

The myth of the “rainbow nation” and South Africa’s multiracial democracy has surely been shattered by the student protests of 2015. What has also been shattered, though a very long time ago, is the mirror in which whites are able to see our true reflection. The colonial project used brute force and unspeakable violence to protect us and ensure that white people would never be able to see ourselves for what we really are, we would never be able to truly know ourselves and consequently we would live in shackles, unable to reimagine what it means to be white.

The time has come for the pieces of the mirror to be pieced together and for the real work to begin. South Africa is broken; it is bleeding and hasnâ€™t stopped bleeding since the first stab wound of the colonial encounter and its gaping wound left open. Whites can no longer cling, in false solidarity and unsurprising laziness to the evolving consciousness of black folk. It is time for us to embark on our own journey, a painful one I am sure, to develop not only a deeper reflexivity so that we may truly know ourselves for what we are, but also a critical consciousness so that when a young black South Africa shouts, with a pain sitting so deep in his throat that your belly tightens, â€œFuck White People,â€ instead of being surprised or naively believing his statement is unwarranted we shout back, â€œYes, Fuck them!â€

It is my deepest hope that this painful but necessary consciousness will one day grant us access to the new humanity that intellectuals and activists like Steve Biko and Frantz Fanon so bravely imagined. Jessica is a writer and researcher for the HSRC. She graduated with her honours in African Studies from the University of Cape Town and has just registered to do her MA at Wits. She was a Mandela Rhodes scholar (2015) Â and the Chair of Transformation in the UCT SRC (2014).