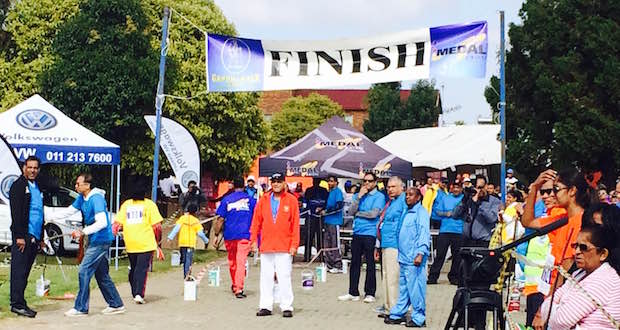 On Sunday, thousands of people joined the 30th annual Gandhi Walk, held inÂ Lenasia,Â toÂ commemorate the legacy ofÂ Mahatma Gandhi.Â LINDOKUHLE NZUZAÂ asked participants why theyâ€™d attended the walk, how they felt about the defacement of the Gandhi statue that stands in the Johannesburg city centre, and about Gandhiâ€™sÂ mixed legacy.Â Mac Obed Galada, police officer, 47
This is a commemoration of my love for running and MahatmaÂ Gandhi. I feel very bad that his statue was defaced. The people who didÂ this are clearly uninformed. They need to go and read up on our history, more specificallyÂ onÂ Gandhiâ€™s history. They must stop defacing statues unnecessarily. I heard that GandhiÂ was a racist, but Iâ€™m opposed to it â€“ I donâ€™t believe that itâ€™s true. These people need to goÂ back and read up on our history and what Gandhi has done. Kevin Phillip, property investor and engineer, 50
This was a training session for me â€“ Iâ€™m doing the SA Masters Athletics in May. I heard aboutÂ Gandhiâ€™s statue being defaced â€“ itâ€™s completely wrong. I donâ€™t appreciate any of the defacing ofÂ any of the statues; I canâ€™t understand why Gandhiâ€™s statue had to be defaced. I canÂ almost understand about the other statues, although I donâ€™t agree with it, but Gandhi? No, I cannotÂ understand how one can deface his statue. To be honest, I have not heard or readÂ anything about him being racist. Romana Nirvana, student, 15
Â IÂ have been participating in the race for two years now. [My swimming club does] the walk for health andÂ unity but, most importantly, to show support for Gandhi and his legacy. Defacing theÂ Gandhi statue was very stupid, and it does not make sense to me. I donâ€™t often read newspapers, but I donâ€™t think that the reports are trueÂ that he was racist. Mpho Buthelezi Mogotsi, mechanical engineer, 27
I decided to be part of the walk to teach my children the healthy way. Defacing the statue was very stupid. Why would you want to go afterÂ statues? There are many things which could be done to change the country, butÂ people want to go around defacing statues. People need to stop defacing statues andÂ focus on more important stuff. If you are unhappy about the government, go changeÂ your vote in the next elections; donâ€™t deface statues as these statues didnâ€™t doÂ anything wrong. Gandhiâ€™s racist past doesnâ€™t matter: history is history â€“ we must learnÂ from it. By defacing the statue, we are robbing the coming generation of learning,Â understanding where we come from as a country. They need to see these statues soÂ they can ask questions and we can explain; by defacing the statues we are robbingÂ them of that. Zeena Sookha, 24, travel agent
I have been doing the walk for 19 years now, in remembrance of Gandhi and toÂ commemorate his legacy â€“ to honor his work and all that he has done for us. I donâ€™t thinkÂ defacing his statue was correct as he did a lot for South Africa and he doesnâ€™t deserveÂ his statue being defaced. I donâ€™t think he was racist as he did all he did for us.

Lindokuhle Nzuza is a freelance writer and a lover of art and books. She is passionate about Africa, gender issues and human rights.

– Voxes have been edited for brevity and clarity.
– Images by Lindokuhle Nzuza. Image of Ghandi statue in Chennai via Wikimedia Commons.
– For information on Gandhi and his often whitewashed history, read more here.