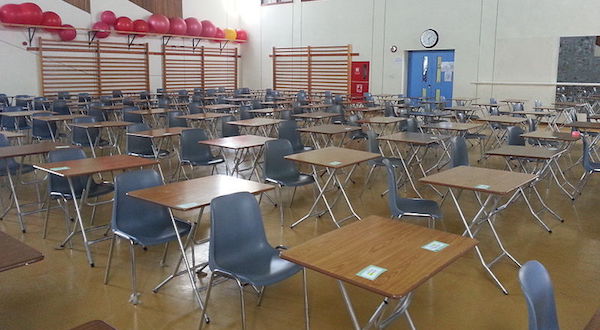 Cheating during the matric exams has been uncovered in seven of the nine South African provinces, with several instances of â€œgroup copyingâ€. Schools identified as exam centres where cheating took place are set to have their results withheld, and cheating students will be censured. But according to Unathi Mshengu*, itâ€™s not that hard to cheat in a matric final and get away with it. She told AAISHA DADI PATEL how she did it.

I was in matric in 2011. I cheated in one of my final exams and got away with it.

I really didnâ€™t want to cheat. I am a person with morals and I am capable of making decent choices but cheating was the only way I could see myself passing.

Iâ€™ve always struggled with Afrikaans â€“ learning it, speaking it and even accepting it as an African language.

Iâ€™m Xhosa by heritage and although I had the option to choose Zulu as my first additional language, when I chose my subjects in grade 10, my family encouraged me to choose Afrikaans instead. I always planned on going to UCT and I knew that Afrikaans is still widely spoken in Cape Town. I thought it would be helpful to my future, that I would have use for it, and that it would look good on application forms.

But I struggled with Afrikaans at school. Iâ€™ve always been more inclined towards numbers. I enjoyed maths and did very well at physics, but Afrikaans kept letting me down. I had a friend who would always help me and God alone knows she is the only reason I passed. When it came to tests, I would do everything I could to scrape a pass (40%) and sometimes I made it, but a lot of the time I didnâ€™t.

I was freaking out about the Afrikaans exams before finals were even upon us. But I studied hard and I tried. The first paper, which is language, I kind of guessed and prayed my way through. I did pretty much the same for the second paper â€“ literature â€“ but I didnâ€™t even know what I was writing there, so I wasnâ€™t banking on that for much. All my hopes lay with paper three â€“ creative and transactional writing.

A couple of days before the exam I asked my friend if I could study with her and she helped me to write â€“ read: she wrote â€“ an essay on a generic topic that would probably be set as an option. I think it was something like â€œMy friendsâ€ or â€œMy familyâ€. I left, promising her that I would try my best to memorise the essay and then rewrite it from memory.

But on the morning of my exam, I was too stressed to focus. I couldnâ€™t remember anything, so just before we walked into the exam venue, I pushed the piece of paper into my plastic sleeve. We all kept a plastic sleeve with a form that confirmed we were eligible to write matric and listed our subjects and personal student numbers. I also used to keep my ID in there and no one paid much attention to it. Most people kept their plastic sleeves on their desks as they wrote.

As soon as we were given the go-ahead to start writing, I managed to slip my essay out of the sleeve. I kept it underneath my question paper â€“ sure enough, one of the answer options was an abstract picture that corresponded to what my friend had written on for me â€“ and I made as though I was doing planning for a while so I wouldnâ€™t appear too suspicious. About 15 minutes into the exam I started copying from the page, word for word. I had no idea what I was writing, but I trusted that my friend was right and I was so relieved that I would at least have this part of the subject sorted out.

I never worried that I would get caught, and luckily, I never did. I never told my friend exactly how much she helped me because I didnâ€™t want to implicate her in anything, and Iâ€™d still feel bad if I had to tell her that she helped me cheat.

In the end, I got a 50% pass for Afrikaans â€“ even I was shocked â€“ and Iâ€™ve come quite far since. Iâ€™ve just graduated with a commerce degree from UCT and the future is looking good. Honestly, I donâ€™t have any regrets.