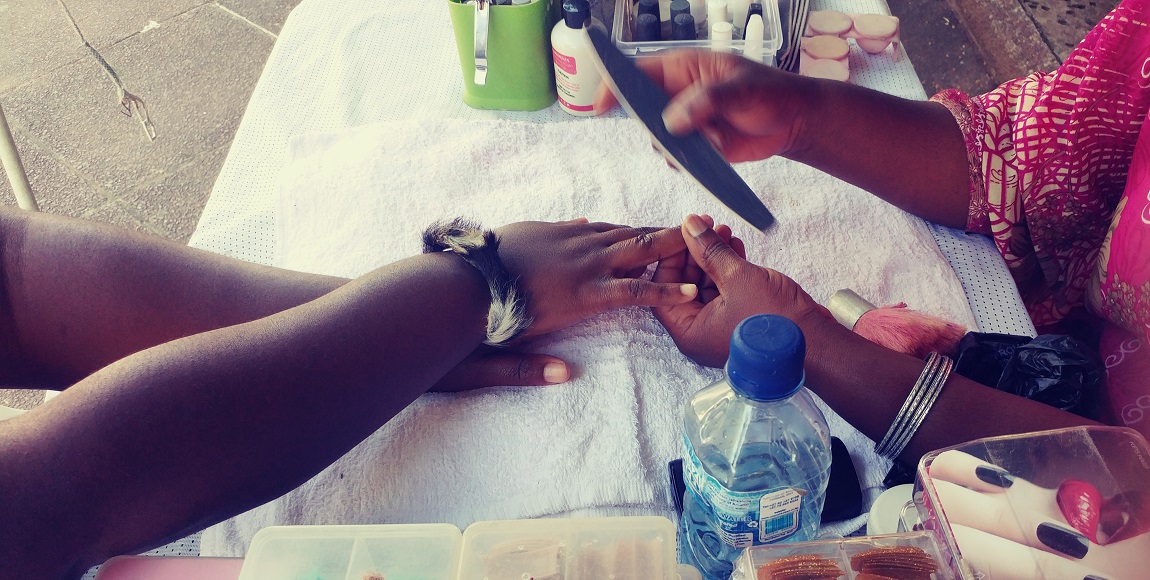 Naomi Nseya is a nail beautician and a mother of three from Umbilo. Hailing from the Democratic Republic of Congo’s capital city, Kinshasa, the 32-year-old says that being a non-South African citizen is hard in the job market and everywhere else. She told The Daily Vox how she doing people’s nails has helped her feed her family for the past seven years.

I came to South Africa in 2011 after fleeing from a war back at home in Kinshasa. I’ve never looked back since then. I had a toddler at that time and had to travel with him all the way from Congo to South Africa. It was a terrifying journey. I had to be in a bus for five days. The language barrier made things even harder – I only knew Lingala and French, and could only understand Swahili.

Even when I wanted to communicate with people next to me, I didn’t know where to start. When I got to Johannesburg, I met a Catholic priest who took me with to Durban. I stayed in a church for some time until I could find my way into making a living. I looked for a job with the hope to find something, but my documentation couldn’t secure me anything because I’m a foreigner.

I ended up working at a salon for a while but it didn’t last. I had to stand throughout the day, everyday and I was getting sick from it. I started buying stock to do people’s nails and eyebrows. Because I’m not South African, even finding a space where I could erect my tent and open a stand to work became impossible. I had no other option but to rent this open space from a vendor who has a permit. I pay about R1 400 a month for this place. I still have to pay rent and school fees for my kids. My husband is a car guard, he doesn’t make much either but we assist each other where we can.

I did not come to South Africa because I wanted to, but it was a matter of life and death. The war back home was rife and thousands of people had been killed already. I knew life wasn’t going to be easy when I came here but I didn’t expect so much hate from my fellow Africans. Being called names and a foreigner by people of the same soil as you is appalling. Everywhere I go I’m being reminded that I’m a foreigner, even nurses at hospitals remind me that I’m not a South African citizen.

I remember during the xenophobia outbreak in 2014, I was pregnant and had to deliver my baby in those days. I was turned away from one of the hospitals by nurses who told me I had to go back to my home country. I had to go to another one and when I got there, the treatment was no better. I am grateful to an old lady who was a nurse there at that time. If it wasn’t for her, I wouldn’t have made it.

I haven’t seen my family in 10 years now. Even when I left Congo, I hadn’t seen them in three years because we were separated by war and everyone was living in a different area. I miss home sometimes because, no matter what, home is home. But I can never be able to afford to travel there since I now have a family, it would cost me a fortune that I don’t have.

Doing people’s nails is not a job because sometimes it becomes very quiet, but it’s something. It’s also not an easy job because there’s many of us and some customers prefer their nails to be done by South African ladies as compared to us. I don’t know how I’m surviving with my family but by God’s grace, we are surviving.