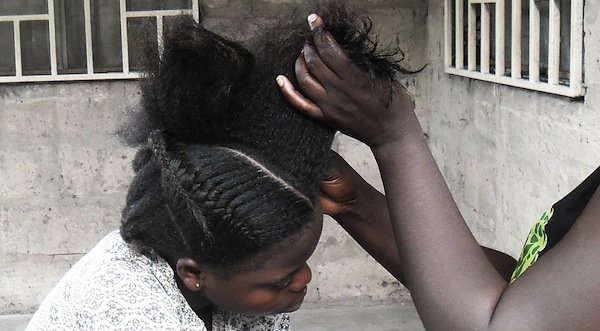 Hair salons are a major feature of Braamfontein streets. With so many students living in the area, there is stiff competition and reasonable prices are the only way salons can differentiate themselves to their customers.

Laurette Kilemba (28) has worked in three different salons in Braamfontein. The one she is working at now is the best of the lot, she says.

â€œThis salon is busy, it does not even matter what day it is.â€

On a normal day she plaits hair for about six different clients. Kilemba is at work from 8 oâ€™clock in the morning until seven in the evening.

Kilemba got married in June this year but she looks back on the day with mixed feelings — she and her husband were mugged that same day.

â€œThe tsotsis came to us and stole everything; our phones, cameras and money. I donâ€™t have memories of my special day. The only thing I hate about South Africa is the tsotsis,â€ she says.

Doing hair in an area, where prices have to be kept low, doesnâ€™t pay much. Kilemba gets a monthly salary of only R2 000. Her husband worksÂ as a security guard, and between them they manage to make ends meet.

She hails from Kinshasa, in the DRC, and she came to South Africa to seek her fortune.

â€œEveryone does hair in Congo. You cannot make money [that way]. My sister told me that there is money in South Africa, so I came,â€ she says.

That was back in 2009. The hardest part was leaving her family behind.

â€œI found my sister here, that made it easier for me, but I still miss my family,â€ she says.

â€œWe are saving money for me to get South African citizenship, but it is expensive. I donâ€™t even have a work permit. My husband has been given political asylum here and that makes life easier.â€