Home As Told to “I never thought I was a foreigner until this injury happened to...
WhatsApp
Facebook
Twitter
Email
Print 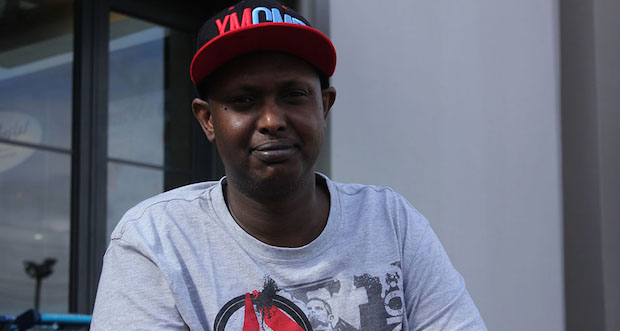 ABDI KADER SHUKRI arrived in South Africa in 2003, seeking peace from a war-ravaged Somalia. At 32 years old, Shukri is now confined to a wheelchair after being shot by locals in Cape Town. Despite his struggles, he is determinedly building an organisation to address the plight of disabled Somalis who were injured in senseless attacks. He spoke to Ra eesa Pather. I came to South Africa to study, but there was no way to get funding. For one year I worked in a clothing store to put bread on the table. After I left, I had a small amount of cash with friends that we used to open a spaza shop in Nyanga township. That’s how I started working and living in the townships.

I have seen a lot of things – some are good, some are bad. When the 2008 xenophobic attacks happened, I lost my shop, and went to live in a camp in Fish Hoek. Later that year, I came back because the government said we have to come and re-integrate with the society. So, I restarted my business.

The worst thing happened to me on 18 September 2012 in Gugulethu. I used to have a store there. It was a Thursday morning, and I was packing stock from the car into the shop. There was a customer who came to buy airtime. He spoke a local language, isiXhosa, and said, “Bakhona!”, which means, “They are here!” I didn’t realise what he meant, but when he left, two gentlemen approached me with two firearms. They shot me once.

They didn’t take anything, they just left me on the ground. People came to help and I was admitted to Groote Schuur Hospital. They found I had spinal cord injuries and told me I would never walk again – it was the worst thing I heard in my life. I couldn’t accept it.

I was admitted to the Western Cape Rehabilitation Centre where I started a programme to learn how to manage a wheelchair and be independent. I can move my legs, but I am unable to stand. I was there for five months, and during that time I met three Somali patients. They didn’t understand enough English to speak with the staff, but I translated for them so they could know the challenges they would face.

When I left the hospital, I kept getting phone calls from people telling me about their illnesses, and that’s when I decided to help my fellow brothers with their disabilities. After 10 months, I found 29 Somali people living in various places around South Africa with disabilities. Most of them have spinal cord injuries, some are even paralyzed.

We meet one another on my Facebook page, Somali Disabilities Board Cape Town SA. I send them links to disability programmes and news from around the world so that they can still have hope.

The refugee permit says that a person has the right to social grant money. I have a disability grant: it’s only R1,350 per month. It’s nothing that I can survive on – I have to depend on my friends and family to assist me. But there are so many people I know that have refugee status and can’t even get their disability grants. When they go to the SASSA [South African Social Security Agency] office, they are told they have to get a refugee ID. If you don’t have an ID, you have to go to Home Affairs and apply.

We don’t have transport to meet each other. There are people in my organisation who don’t even have a place of their own to stay; they are staying with other people who are not willing to have them. It’s similar to a person living in the street – you don’t have rights, you don’t have dignity, or a person to respect you. You start to think you have no value, you are meaningless.

The locals believe we take their jobs, we take their land, we take their income. It’s not all of them, but I can say it’s 10% of them that believe that. In the day hospital when you’re going to fetch your medication, there is hate speech. I can understand the local language, but they think I can’t. Some of the staff say, “It’s what they deserve, they have to go back home.” I never thought I was a foreigner until this injury happened to me.

Every time I see the news on TV it makes me feel bad, but I don’t have the option to leave. If a person has been shot and killed, you take him to the grave, you bury him, and you forget. If a person comes into your place, and loots you, then you still have the ability to walk and leave the country. But in terms of my situation, I am not dead and I’m not alive. I’m disabled. I’m stuck in the middle of nowhere. Nobody knows about our issue and there are no NGOs who can help us. I am here to raise my voice and let the world hear our story, and see how we live. That’s my biggest priority – let the world hear our voice.

Everyone has their own challenges. One day I will achieve my goal, and see my fellow disabled people happy and smiling.