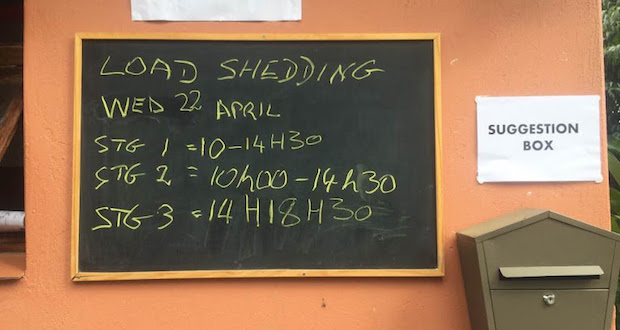 The National Energy Regulator of South Africa (Nersa) has declined Eskomâ€™s application for a 9.85% electricity price hike. But Eskom has warned that this could mean more frequent power cuts. Small businesses, which do not have the luxury of generators, will be under the most strain. Small business owners in Durban had a lot to say about how their livelihoods will be affected.Â Azaz Patel, 25, Durban CBD, convenience store owner
This thing of power being cut is already affecting us, and now that it is going to happen more often my business will suffer. I use electronic devices in my store and when there is no electricity, it kills my business. I already lost money due to one of my fridges which got damaged by power cuts. I normally switch off my appliances when there is no electricity but I couldnâ€™t switch it off one evening because I was home and when I returned in the morning, my fridge was damaged. This thing frustrates me because we never know when exactly the power will be cut, we just get shocked. Lucky Asfaw, 23, Durban CBD, convenience store owner
I did not really get that much affected by the load shedding until I started selling fried chips. The only electric appliance that I had here was just the fridge. I only had customers complaining because of the beverages not being cold. Now I have to worry about two factors in the store â€“ fried chips and beverages. I get customers who order fries and leave money, and then sometimes when they return, the power has been cut. This causes me to lose money that I already had and I have to give the customer their money back. With more power cuts, I guess I will lose more money. Nana Nkosi, 30, Durban CBD, restaurant owner
We basically work with electrical appliances here because we work with food products. People come here to purchase ready-cooked meals and we have to cook. Besides the cooking, our meat in the fridges gets damaged and the ovens arenâ€™t warm when there is no electricity. Sometimes we have customers who come here but there is nothing we can do to assist them because there is no electricity. We lose a lot of business, especially on the weekends, and the worst part is that, even though there are power cuts, we still have to pay full rent and a monthâ€™s worth of electricity. We are losing money due to no production but we still have to pay employees and see to other maintenance in the restaurant. Nonhlanhla Shabangu, 38, Umlazi, laundromat owner
At my laundry shop, the washing machines and tumble dryers have to be working at all times. I get customers at any time of the day and these power cuts are affecting my business. This is my source of income and having to pay rent here with no assurance that I will make enough money is stressful. I pay for this electricity, but it still fails me. I live in Umlazi. Sometimes I take a taxi to come to town, only to find that there is no electricity this side. Some of my regular customers are so dependent on my laundry â€“ they leave their work uniforms to be washed here so they can fetch them later when they go to work. So if, during that day, the power is cut, I get disappointed customers. It would be better if they just increased electricity prices, that way at least we will know that our business wonâ€™t be affected that much. Mthoba Chamane, 28, UMgababa, shop owner
I wasnâ€™t aware about Nersaâ€™s ruling, but I can imagine how bad things will be for the business. We have experienced load shedding before and it has cost us a lot. There was a point where the shop burnt down because there was power cut on that day and I forgot to switch off the stoves. The problem is that even if electricity prices increase, chances are there will still be load shedding regardless the fact that we will be paying more. In that case it wonâ€™t make any difference, our business are being affected with or without prices going up. Khuliswa Mbhele, 21, Illovo beach, student whose family runs a butchery
Running butchery depends on electricity â€“ especially if itâ€™s a small business. My mother doesnâ€™t have a backup plan so when load shedding strikes we get worried. I personally feel that Nersa should reconsider its ruling because load shedding is at a critical stage as it is and we canâ€™t afford to have more of it. If putting up electricity prices could help manage the situation then it is only fair that Eskom up the prices so that we wonâ€™t suffer any further. We have suffered enough with the current load shedding stages because we had to stop holdingÂ stock for a while due to the meat rotting.