Home Features â€œI will rather starve to death in my own country than be...
WhatsApp
Facebook
Twitter
Email
Print 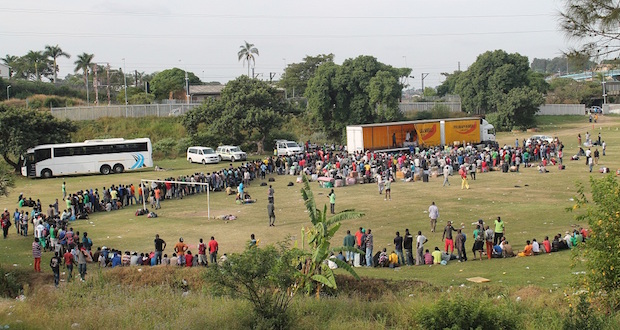 Thousands of foreigners were repatriated to their home countries this week after spending weeks at camps for displaced people in KwaZulu-Natal. The camps were opened after a spate of xenophobic attacks throughout the country. QINISO MBILI was there when some foreign nationals boarded the buses on Tuesday.

This is the third week since repatriations began. The last group of foreign nationals to be repatriated were the Malawians; the Zimbabweans and Mozambicans have already left. Most of the departing immigrants were not happy about going back to their home countries.Â â€œI am going back home to my poverty-stricken society. I will no longer be able to support my mother,â€ said Jacqueline Stephen.

On Monday, there were about 2,500 foreign nationals from various African countries seeking refuge at the Chatsworth camp. That number has been dropping as the occupants of the camp have boarded buses bound for their countries of origin. A total of 1,002 Malawians departed from the three camps for displaced people in KwaZulu-Natal on Tuesday alone. Three buses waited at the Chatsworth camp to take 252 people on the 2,700km journey to Malawi. Many people who sought to find a seat on the buses were denied one because of the amount of luggage they had and told to wait for a truck that would come the next dayÂ to transport their belongings. The truck arrived on Wednesday and took almost the entire day to load.

Among the possessions piled up near the truck for loading were childrenâ€™s bicycles, suitcases, and cardboard boxes, tagged with their ownersâ€™ names. Hundreds of Malawians stood in by the pile, shouting at the men loading the possessions into the trucks to oversee the safety of their belongings.

For most foreign nationals, who had made South Africa their home for many years, it was hard to have to leave like this, taking only what they could carry. After years spent building their lives here, some people had lost all their belongings in the looting and attacks, others had managed to salvage what they could before fleeing the mob.

â€œI am going to return home poorer than when I left. That is a shame,â€ said Mike Naphane, who left behind two young children and his heartbroken South African girlfriend. Naphane had papers but his girlfriend would not bet his life on them â€“ the people carrying out the violence do not stop to check papers â€“ and had tearfully urged him to leave while he could.

While most people left in fear of further xenophobic attacks, others decided to stay behind, hoping the tension would dissipate. Some who boarded the buses to leave said they hoped to come back to South Africa once the situation improved; others swore they would never return. â€œI will rather starve to death in my own country than to be killed like a dog in a foreign country,â€ said Daniel Sainet, a Malawian vendor.

More buses were scheduled to arrive on Thursday to repatriate the remaining Malawi nationals. Officials said that the camp wouldÂ close after the last bus to Malawi had departed. Those people who choose to remain in South Africa will have to return to communities from which they fled, and begin the delicate process of reintegration.

All images: By Qiniso Mbili.