Home Features â€œIf I was a white student, I wouldn’t have been chargedâ€ â€“...
WhatsApp
Facebook
Twitter
Email
Print 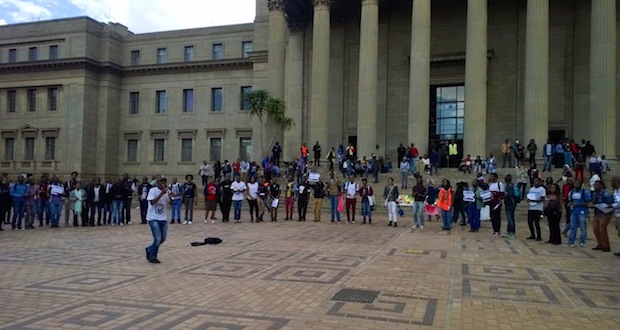 Speaking at a student protest on campus on Monday, Dlamini said: â€œIf I was a white student, I wouldnâ€™t have been charged…Â If apartheid doesnâ€™t exist in South Africa, it exists in Wits. Wits undermines everything that is black.â€

Dlamini, who was removed from his position as president of the Wits Student Representative Council (SRC) following disciplinary procedures concerning assault charges dating to last year, saidÂ he had called on the Legal Office for a public review and hearing of his charges on Friday.

Dlamini said the protest was â€œnot about one man, but about an African childâ€ and thatÂ Wits was fundamentally â€œa racist institutionâ€. Members of the Wits Progressive Youth Alliance (PYA) have dug their heels in and expressed continued support for the controversial formerÂ president.

On Monday, several dozen students marched through the universityâ€™s Great Hall toÂ Senate House, where the vice-chancellor, Adam Habib has his office, and handed over a memorandum to the dean of students. Their demands include theÂ reinstatement of Dlamini as SRC president, the rehiring of the workers contracted by Wits service provider MJL Electrical, an end to the outsourcing of labour on campus, and a call for students to beÂ consulted when policies that affect themÂ are created. Addressing the protestors, the leaders of theÂ South African Students Congress (Sasco) and Young Communist League (YCL) â€“ both of which form part of the PYA â€“ threw their weight behind Dlamini, calling for him to be re-instated, and askedÂ why Habib has the right to remove a democratically elected student leader and why his decision was only put into effect now?

Habib has responded toÂ both of these questions on various platforms over the past week.

All images: By Muhammed Ismael Bulbulia.