Home As Told to “If other countries can afford students free education, why can’t we?”
WhatsApp
Facebook
Twitter
Email
Print 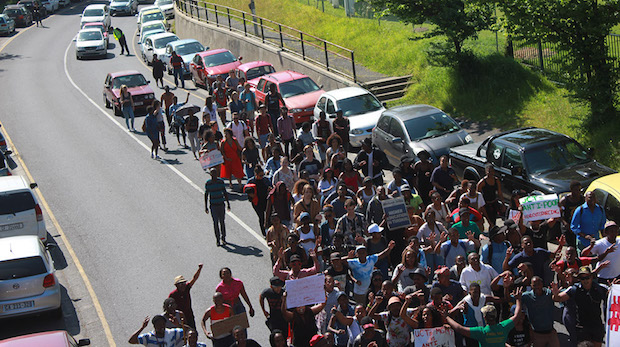 SEABELO MOEPI (21) was a chemistry and biochemistry major at UCT. But he couldn’t keep up with the fees and found himself excluded before he could graduate. Technically, the highest qualification he’s achieved is matric.Â Today he volunteers as a science tutor. He told Firdaus KhanÂ how his life unravelled and why he believes fees should fall. I started studying for a bachelor of science degree at UCT in 2013 and pretty soon Â ran into a problem with the Service
Education and Training Authority (Seta) that was sponsoring me. They changed their policy and I ended up not receiving funding for 2014.

From there, I tried to apply for other means of funding. I tried getting in touch with the SRC, but because it was exam time, there wasn’t really anyone available. I approached the financial aid office, but I was told that funding for the year was closed. They said I could submit an application to National Students Financial Aid Scheme (NSFAS) and appeal for late funding. I did that, and the wait began fromÂ there. I continued to apply for other funding elsewhere, but that wasn’t fruitful either.

UCT doesn’t really pressure you into paying initial fees. They allow you to register, provided you don’t have debt from the previous year. So for 2014, I was able to register, I was able to study, but the debt kept accumulating. After a certain period, they start charging interest, and the interest just kept adding to the debt. I laterÂ received a notification that I had received financial aid for 2015, but I still had no idea what was going to happen to the debt from 2014.

In January this year, I went back to campus because I had supplementary exams to write. On top of that, I now had the burden of finding accommodation, because my residence accommodation had been taken away due to the fees I owed. I had to find a place to live off campus, without knowing whether or not I would be able to continue with my studies.

Unfortunately, my appeal for NSFAS to cover my 2014 studies was unsuccessful so I had to come back home to Pretoria, because even though I had financial aid for 2015, I had debt for 2014 so I was not allowed to register.

I told my parents about the situation and they really tried to help me with getting an education loan, but they didn’t qualify for a bank loan. We tried approaching the company who was sponsoring me, but they distanced themselves from my situation. Now, I’m a volunteer science teacher at my previous high school. I’m also tutoring maths and science with aÂ non-profit organisation, which has afforded me a slot on a local radio station we use to tutor students.

The debt has amounted to over R100,000 – money I don’t even have. Technically, the only qualification I have is my matric certificate. Where am I going to get employed? Even if I do, how long will it take me to settle this debt?

Once you’re a bookworm, nothing else will satisfy that hunger to study. I’ve applied to other institutions, but because I have debt, UCT has not released my academic records or a certificate of good conduct. After spending nights writing motivation letters to sponsors and institutions for admission, in the morning, a sheriff arrived at my house to hand me a summons from the lawyers at UCT.

I don’t qualify for financial aid from NSFAS, but at the same time my parents can’t afford to pay R60,000 to R100,000 for my studies. I’m just appealing to the department of higher education, because I believe that funding for higher education is not prioritised. If other countries can afford students free education, why can’t we?

21-Year-Old Entrepreneur: ‘I Started My Business With No Funds’