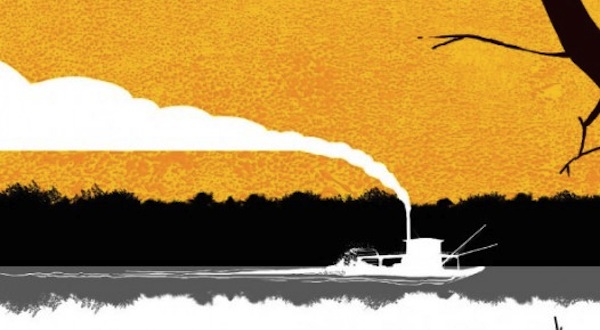 Joseph Conradâ€™s novellaÂ Heart of DarknessÂ drew little attention when it was first published in 1899, but eventually grew to be recognised as one of the best novels of the 20thÂ century.

Set at the cusp of the twentieth century,Â Heart of DarknessÂ follows Charles Marlow, an ivory transporter, on his journey through the Congo.Â It is a complex and nuanced tale that delves into colonialism and human psychology.Â  Through the character of Marlow, and his fascination with authoritarian ivory trader Mr Kurtz, the destructive mentality of colonialism is brought to life. The novella is now the theme of a book illustration competitionÂ run by London-based publisher The Folio Society andÂ the charity organizationÂ House of Illustration,Â which has produced some powerful and imaginative works.

The 2014 leg of the competition was launched in September, and inspired both digital and traditional artworks based on Conradâ€™sÂ Heart of Darkness. Winners will be announced later in the month. You can view the 25 entries which were long-listed for the competition on the House of Illustration website.