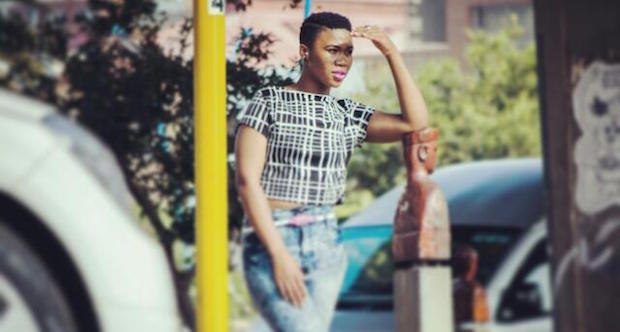 Despite its progressive laws concerning sex, gender and sexual orientation, South African society does not always make space for people who identify as lesbian, gay, bisexual, transgender or intersex (LGBTI). MONGEZI MKHONDO told Bongiwe Tutu about his life as a transgender person.

I tried to convince myself that I must just be gay and just be a boy. But I’d be lying if I said that was me. I’m not just gay, I am transgender. I make myself look like a beautiful woman to make myself feel happier, and to be truer to myself, because that’s who I really am.

I’ve known I was different since grade six or seven. I didn’t wear a skirt like the other girls but it was clear to me that I was actually a girl on the inside, with male genitalia,

I used to cry myself to sleep every day and ask why my life was so difficult. As a Christian you go to church and people tell you ‘Gay people are evil; they’re the biggest sinners.’ I tried to commit suicide a number of times.

I felt liberated at high school. I studied at the National School of Arts (NSA) and I could embrace my sexuality because in the art industry we are encourage to express ourselves. It was like a different world, our unique traits were welcomed. But now I am frowned upon.

I hate being different. Nobody knows what it’s like to live this way. My friends say they understand what I’m going through but the really don’t.

I’m now studying accounting at Wits University. I live in a male res and it’s really hard. I don’t usually get dressed as a woman while at res because I don’t really want to attract any attention. I don’t want people to get confused and ask why a girl is living at a male res, so I stay away from that as much as possible. I don’t want to confuse or trigger reactions from people. I don’t want them to do something to me next time.

If we go out to parties, I dress at a friend’s house. Once I forgot my heels and had to fetch them at res. One of the guys thought I was a girl. It was scary, but nothing happened.

The only time I can truly be myself, with my face in full make-up, is when I’m out with my friends.

I don’t go home much because my parents don’t understand me.

I am closer to my mom than my dad but I think my mom has a harder time accepting that I’m transgender. She doesn’t want her only son to be gay, never mind being transgender.

She found out I was gay in a meeting with my high-school clarinet teacher. He told her he’d never met such a “wonderful gay boy” in his entire life, and my mom said: “What are you talking about? My son is not gay.” She’s never spoken about it since.

My father calls me randomly and tells me he loves me. He always says: “Do what makes you happy. I just want you to work hard and be you.” I think he still loves me and I think he knows what I am.

– As told to Bongiwe Tutu.