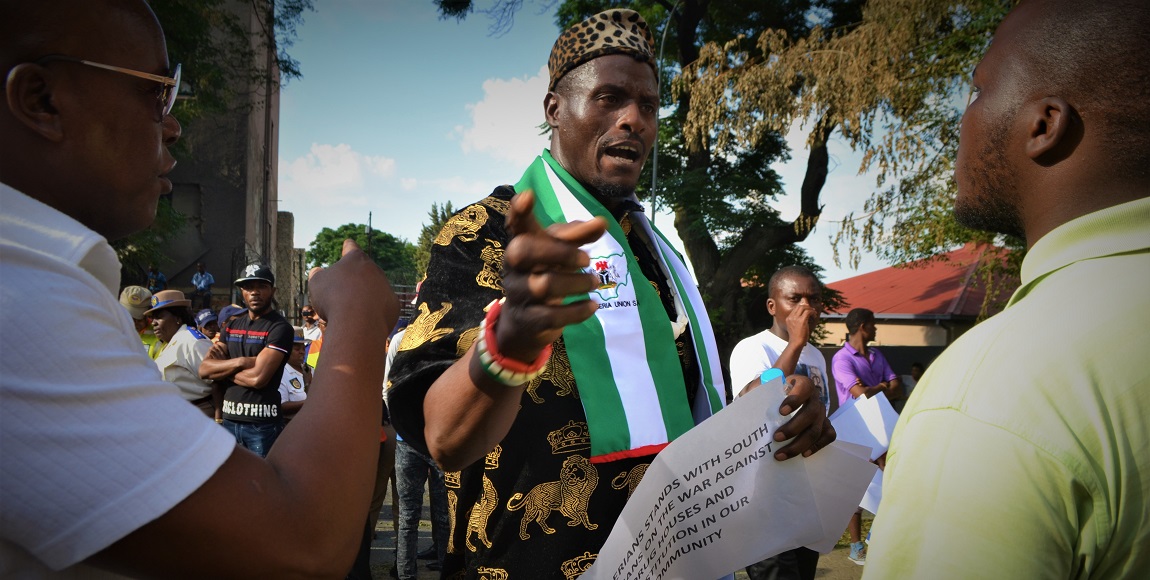 Monday in Rosettenville was an odd day.

A delegation of government officials, including Minister of Home Affairs, Malusi Gigaba, were doing the rounds visiting suburbs around Johannesburg with a blue light brigade. Rosettenville was one of their stops; their final and arguably most important one.

The situation in Rosettenville is now an issue of national discussion, touching on concerns of police inadequacy, corruption, poverty, crime, and xenophobia. Itâ€™s a mess that echoes the struggles faced in many other urban areas in South Africa – so we should take notice.

But perhaps more importantly to the ANC delegation, the DAâ€™s mayor of Johannesburg had already made his presence in Rosettenville known and publicly taken action. Irrespective of the effectiveness of #MashabaInAction, it no doubt reflected poorly on the ANC to be upstaged by the opposition. Before arriving in Rosettenville, branch and provincial ANC delegates spent time fighting over who was to lead the programme of surveying the burned down houses and meeting residents.

Political crisis is, after all, also political opportunity.

Infighting between ANC branches about who is running and is in charge of community meeting in #Rosettenville pic.twitter.com/P4guuaszDX

Gigaba, along with his entourage of police officers, was the centre of focus during the visit. His presence there, walking the streets in designer clothes, was to be seen as a sign that the government was responsive to the issues of the people.

But beyond the ministerâ€™s presence and the party politicking, what drew attention was the inspiring intervention by Nigerians holding signs declaring solidarity with South Africans. Boldly stating that they too were against the scourge of crime in the neighbourhood, and that the criminal immigrants did not represent all immigrants. â€œForeign nationals are involved in criminal activity, just like locals are, but what we want is that the law-abiding citizens that are resident in South Africa should unite against all the criminals – no matter where they come from. Because we are all members of the community,â€ said Ikechukwu Anyene, president of the Nigerian Union of South Africa. He added that they had started their own campaign against drugs, prostitution, and human trafficking.

His sentiments spoke to a nuance and fear that many migrants have in the community – that the community would label and target all immigrants as being part of the problem – irrespective of their innocence.

â€œI sometimes feel unsafe in this country. Like I need to watch out before I go to school and when Iâ€™m coming back. But I grew up here. I care about this country, it is my only home,â€ said Chadrack Kazembola, a Nigerian-born high school learner from Rosettenville. His mother, Yolanda, echoed his fears but emphasised that the culture of drugs was just as worrying for her. Her child, a member of the community, was as vulnerable to its influence as any local was.

â€œMe too, I am scared for my boy. If my boy one day starts taking drugs I would be devastated. Iâ€™m very scared of that happening,â€ she said.

She told The Daily Vox that others around her sonâ€™s age were drawn into drug culture and that this was a problem, but one that should not be solved by targeting immigrants and burning their houses.

A local member of Rosettenville who has lived there all her life said that the problem of crime was destroying the area, but felt that it was a crime issue and not necessarily about immigrants.

â€œMost of the crime is being done by foreigners, but not all of them, only some. There are others who are very good, who have humanity, but others who are criminals,â€ she said.

Despite this, the Nigerians present during the delegationâ€™s walk-about were the targets of harsh words and overt hatred, irrespective of their stance on crime.

â€œHow can a nine-year-old child be made to be a prostitute? What kind of sick man will want to sleep with a child? When the children go to school we are scared if they will ever come back. We donâ€™t have enough money to hire school buses to transport them,â€ said another.

Many of the members of the Rosettenville community have identified the problems of drug dealing, brothels and the trafficking of minors as being inseparable from the presence of Nigerian immigrants. They also explained that they felt helpless since the police never took action when a violation took place. This left them with no option but to take it into their own hands.

But most evidently, they were angry and wanted the government to take action. The situation in Rosettenville looks bleak for many. The local residents have legitimate concerns surrounding the safety of their community, yet many seem to be missing the nuance that their concern is shared with immigrants themselves.

The question of who belongs and who doesnâ€™t is a problem of particular sensitivity in countries such as South Africa, where land dispossession speaks very deeply to our history.

The question is perhaps philosophical in scope, and will no doubt continue to be debated. Yet at the same time itâ€™s very difficult to ignore some of the words that Anyene shared when faced with the feelings of residents telling him to go back home.

â€œI cannot go back home, because this is my home. My children are teenagers here and they can be victims of crime tomorrow. This is not about Nigerians going back home because this problem is ours too, we need to work together to solve it. We walk the same pathâ€.