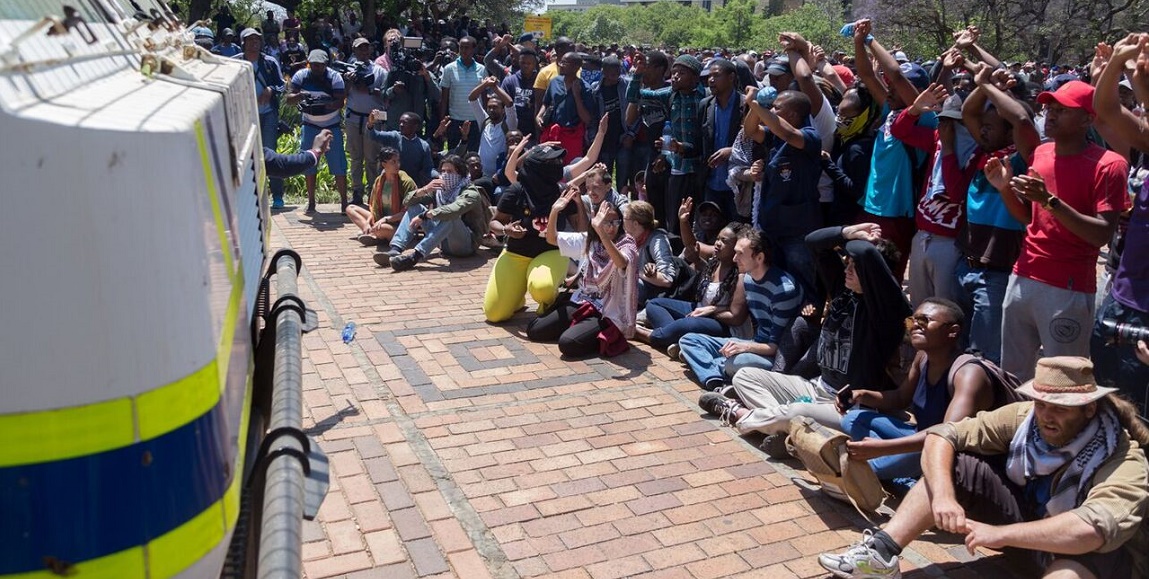 In an article published recently on The Daily Vox, Ebrahim Fakir and Ayesha Soni posed some serious challenges to the #FeesMustFall (FMF) movement, and members of the fallist movement. This contentious engagement is welcome, as it draws attention to a number of issues that have been – continually – leveled against the student movement over the years.

In hopes of taking the discussion forward, The Daily Vox has unpacked some of the key claims raised by the authors which speak to general concerns many in the public have voiced.

Claim 1: FMF is nothing unique or new. When compared to other protests, in both means and motives, student protests are self serving and destructive

In some sense, FMF is indeed nothing new. Fallists and other commentators have said that theirs is but a continuation of a struggle that was started, and abandoned, after â€œliberation was wonâ€. And if we take a step back, we see that FMF takes place in a social context where issues of poverty, inequality and legacies of injustice are still felt by communities. These issues cannot be separated from FMF.

But at the same time there are a couple of things FMF has brought to the table that, if not new, are at least remarkable:

Indeed, one of the most prominent tactics by critiques of the student movements since 2015 has been to reduce it to a single issue, when fallists have fully elaborated that itâ€™s so much more than that.

Community protests, more often than not, arise precisely because a community rightly feels there is something they should be benefitting from which isnâ€™t being provided – whether service delivery, adequate healthcare or access to higher education. Frustration towards bureaucratic means is also not unique to either. When engagement with rules, processes and institutions have either proved unresponsive or outright apathetic to legitimate calls for change, individuals take to tactics outside of them. This is true for student protests, as well as other protests.

Claim 2: University as a â€˜public goodâ€™ is amorphous

Free education as a â€œpublic goodâ€ is only really amorphous if you havenâ€™t been following the discourse – both locally and abroad.

The basic idea is that under the rule of market-driven economies, education has come to be treated as a commodity for consumption – itâ€™s value reduced to its function of increasing â€œhuman capitalâ€, employability and income. While employment and income are, rightfully, of immediate concern to many, the argument is that education should play an emancipatory role in helping individuals and society develop in line with public interests.

As the Centre for Higher Education and Training points out, academics have been discussing the various developmental roles of higher education, for postcolonial Africa, for decades. Educationalist Mahmood Mamdani, who many fallists draw from, speaks directly to these issues.

Understanding what these educationalists are saying also addresses one of the other key misunderstandings made regarding free education: that students arenâ€™t simply proposing greater access, but that education should be directed towards playing a critical role in dictating the direction South Africa is headed towards. Equipping students to not just become â€œhuman capitalâ€ within societyâ€™s grand market economy, but free-thinking agents interested and geared towards developing our society.

The concern raised by Fakir and Soni here is that many of the models for free education for all call for most, if not all, the funds to come from government. Given that our governmentâ€™s budget is finite in a given year, increased allocation to higher education would mean less will be spent elsewhere. The worry is that fallists are placing higher value on free education as opposed to healthcare, social grants, basic education and other sectors which are of national concern.

But this argument is a straw man. No student or movement has ever endorsed such zero-sum reasoning.

Some of the things they have suggested include: increases to private income tax (for South Africaâ€™s richest) and corporate tax; introducing a financial speculation and wealth tax on assets; taxing the platinum and gold sector and curbing corruption and capital flight to offshore accounts.

As professor Rasigan Maharajh told the Daily Vox, taxation is not a radical idea and has over history been flexible relative to the requirements of state expenditures and the domestic economy.

â€œDuring cyclical downturns, increased expenditures for both welfare and enterprise support results in higher demands on the fiscus budget. In such circumstances tax rates included the US imposing a 94% rate on any income above US$200 000 (US$2.4 million in 2009 rates) in 1944/1945,â€ he said.

While no-one is suggesting anything quite so interesting as the US example, thereâ€™s nothing unheard of about many of suggestions made by fallists. As professor Patrick Bond pointed out just before this yearâ€™s budget speech, business taxes accounted for 4.5% of GDP in 2016. It was 7% a decade ago and 9% in 2008.

Of course, itâ€™s also important to note that not all pushing for free education agree that there should be no user-pays model for the richest students. Others believe we should be flexible in the outlook for the future.

Claim 4: â€œThe attempt of the #FMF movement to be positioned as leaderless and mass led in a sense avoids responsibility and eschews accountabilityâ€

One of the focuses and most powerful things about #FMF has been itâ€™s refocusing on the power of an individual as an independent political actor. Itâ€™s disrupted this notion that political activity is something you only engage in every few years when you vote for another to represent you – or that you have to be a politician to be involved in politics.

At plenaries, this idea of oneâ€™s own individual will and relevance in decision-making is brought to the fore when the way-forward is decided upon on consensus. There is thus mass accountability for actions taken.

Irrespective, I – and no doubt others – am quite unconvinced as to how â€œleaderlessâ€ the fallist movement is. The Wits movement definitely has identified leaders – which raised a number of problems as well.

The most obvious of these problems is the fact that these leaders become easy targets. This meant some leaders were â€œcoincidentallyâ€ shot at close range by police officers, arrested or otherwise pressured to go into hiding. In wake of this the movement was left unsure of its direction. The quickest way to slay a beast is to cut off its head. This becomes difficult if it has an indefinite amount of heads.

Claim 5: â€œWhat the #FMF has unwittingly given credence to, is the excuse for bureaucratic overreach into the institutional autonomy and academic freedom of universitiesâ€

The worry here is that government has been given too much power to intervene in the decisions of universities – which compromises their autonomy.

As the Daily Vox has written previously, this debate is something on which we should definitely keep a close eye. But as Wits Vice-Chancellor Adam Habib said in his interview with us, legitimate concern over the matter is somewhat premature. Government involvement in university affairs has thus far been quite democratic in nature.
Itâ€™s also disingenuous to claim that universitiesâ€™ own failures (and repeated attempts to silence academics looking to change things) havenâ€™t played a part in government deciding to step in to â€œhelpâ€ coordinate the way forward.

As Habib told us last year, â€œThere are institutions where white students in certain campuses constitute over 70%. Thatâ€™s not acceptable â€“ and they need to be held publicly accountableâ€.

So letâ€™s not be quite so quick to blame students for collective failures on behalf of those in power. Thereâ€™s enough blame to go around.

The overall takeaway, I think, is that many critics of fallism and FMF are quite quick to dismiss, relegate or preemptively assume the cognitive biases of fallists. Worse still is when they take the route of using â€œwell establishedâ€ doctrine of our market-driven status quo in order to critique those who challenge it. Thereâ€™s a perverse kind of circular reasoning involved in using market principles to argue against their orthodoxy.

So a lot of the debate ends up being rhetoric, and not argument, by way of using reductive reasoning to label students as idealistic, amorphous, romantic, impatient and so on. Accusing the left of this, or the right of that; appealing to the moderate view as the â€œobjective balanceâ€.

But itâ€™s cool, because the challenges posed are also worthwhile considering as we go forward. Thereâ€™s much debate to be had regarding the mitigating for possibilities of moral hazards and quality declines, which there hasnâ€™t been as much local debate on as yet.

So keep the critique coming – fallists, if nothing else, welcome challenges.