Home South Africa In her own words: Phumelela Mbande on the Olympics and playing hockey
WhatsApp
Facebook
Twitter
Email
Print 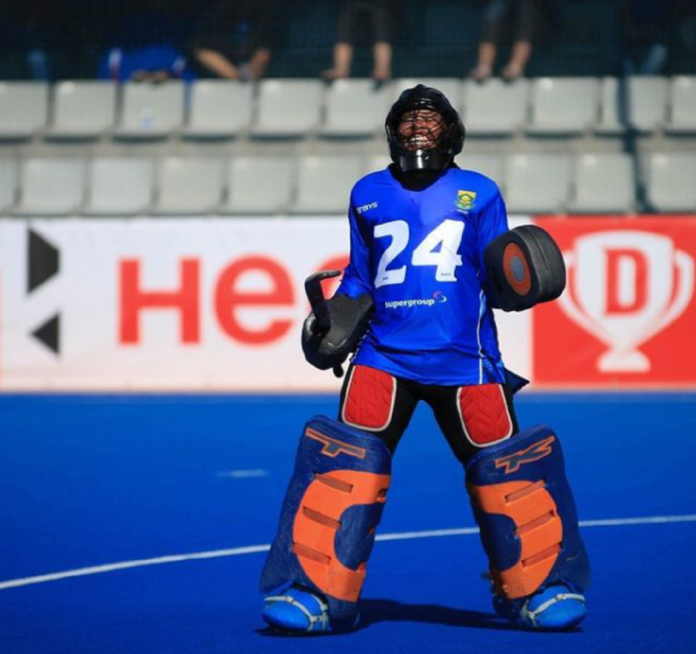 Last month, the South African Sports Confederation and Olympic Committee (SASCOC) announced the team that would be representing South Africa at the Olympics. The 2021 Olympics in Japan are scheduled to happen in less than three months. There are still many concerns and question marks around the games being held during a global pandemic.

But even those questions can’t take away from the excitement vice-caption Phumelela Mbande felt when she was chosen for the hockey squad heading to Japan. We chatted to Mbande about her hockey journey and what the Olympics mean to her.

Just about an hour before the official announcement was made by SASCOC, Mbande found out that she made the Olympic squad. When the Games were postponed last year, the team regrouped in December to begin preparations anew. Mbande said from January, the squad was cut down in a series of selection camps building up to the big announcement.

While Mbande is most definitely excited about securing her place in the squad, she says the entire process has been lengthy and emotionally-draining. “The feeling has always been that even if you make it, there are other people who have been involved from the start. We’ve all gone through the same hectic process,” said Mbande. It’s bittersweet for Mbande to have been chosen knowing there are others who have not made the side.

The team is made up of 16 players with three travelling reserves.

Mbande is no stranger to pressure. As a goalkeeper for the national team and an auditor who juggled playing professional sport with studies, she understands pressure quite well. When she picked up the sport it was a compulsory sport at her primary school in KwaZulu Natal.

“I was sport-oriented so it wasn’t too difficult for me to catch on to the concept of goalkeeping,” Mbande said. She chose the position at first because there wasn’t another goalkeeper but now it is the position which she has thrived in and earned her that Olympic spot. “Also it made sense because I get to be in the protective gear,” Mbande said. She eventually fell in love with the sport and it helped build her confidence at school.

There were times Mbande was unsure if she would play the sport to its highest level, especially as she balanced sports and academics. At the end of 2016-2016, she took a break from professional hockey and thought she was done for good. But after completing her honours in accounting sciences, Mbande realised she still loved the sport and was ready to return at the end of 2016.

Like most women sports players in South Africa, Mbande juggles her career with being a professional hockey player. Mbande is a chartered accountant and external auditor. While there have been times where it’s been difficult to manage, the support from her team and workplace has helped her a lot. Her workplace gives her leave when she needs to join the team and her coaches have been understanding when it’s work-related.

“In 2017, I was writing my board exams and we were playing a tournament in South Africa. At times like that, I wouldn’t be sleeping,” she said. At another time, she was departing for a tournament and was on her laptop right until departure – working to submit something.

And it’s definitely not an option that Mbande would choose one over the other. She loves her job as an accountant as much as she loves playing hockey and representing South Africa. It was also her hockey playing that allowed her to pay for her academic studies. “It’s an opportunity I would never undo regardless of the stress and the panic I often go through,” said Mbande.

Read more: We’re backing these SA women to slay at this year’s Olympics

Even as teams are getting ready to depart for the Games and preparations are underway, there are still questions about whether the Games will go ahead. Polls have shown that more than 80% of Japanese people oppose hosting the Olympics this year. Most of the athletes heading to the Games will likely be vaccinated either in their home country or in Japan. In South Africa, athletes will be vaccinated with surplus local doses which were about to expire. This is because an allocation from the International Olympic Committee hasn’t arrived yet.

Mbande said her team is preparing for the Games regardless of what happens. “Whether they go on or not is not in our control. The last thing we want is to anticipate a postponement and then we actually have to go and then we’ll look like a tjop because we hadn’t prepared properly,” she said.

However, the preparation process is completely different from the past. There aren’t as many preparation matches before the Games especially with matches against teams who will also be playing in Japan.

“But taking everything into account, it’s important that the Olympics go ahead. It’s a beacon of hope. It is a story of fighting against all odds to make sure you are competing at the highest level. There will be many athletes at these Games who have had COVID but have still managed to come back and train and will play their best game,” said Mbande.

She hopes that with the Games, it can be a way of looking to the future and hoping for a better time than the currency, doom-filled one.

Mbande is quite passionate about building that better future. She is the founding member of Players for Transformation (PFT). Mbande along with other players have been pushing for greater transformation in the sport. Transformation issues almost prevented the hockey team from going to the Games at all.

Read more: We need to speak about how badly sportswomen are paid

Even in her parting words, Mbande keeps that message strong – about dreaming and persevering.

“If you believe and dream, keep at it. Persevere. It will come right. It might not happen the next two years or even four years but your time will come if you stay in it,” said Mbande.