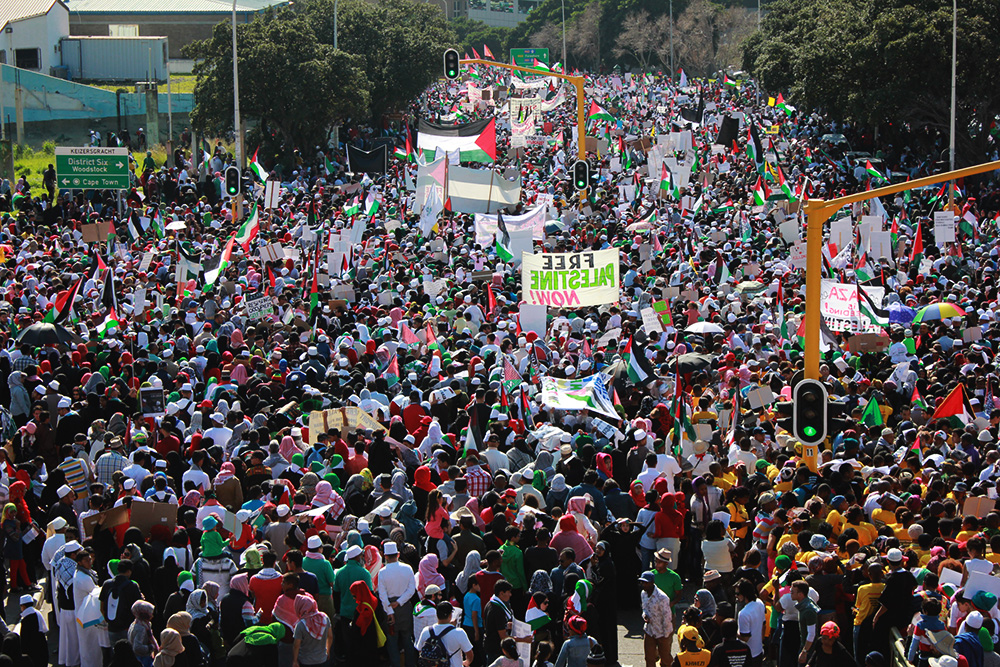 The exact number of people in Cape Town who came out in support of Gaza on Saturday is still being disputed. Estimates put the crowd between 150,000 and 200,000 people. And as protest marches go, it certainly was large.Â The demonstration was organised by the National Coalition for Palestine which represents overÂ 30 religious and civil society organisations, trade unions and political parties. Protestors descended on District Six, where former Archbishop Desmond Tutu addressed the crowd. They then marched to Parliament in the city centre, demanding freedom forÂ Palestinians andÂ justice for war crimes committed in Gaza. By RA’EESA PATHER. Â The political history of keffiyeh dates back to theÂ 1930s when Palestinians fighting against theÂ British Mandate of Palestine woreÂ the the scarf to hide their identity. But it also became symbolic of the resistance andÂ to wear it meant that it was worn in solidarity with the Palestinian struggle for self-determination. In the 1960s, the keffiyeh becameÂ associated withÂ Palestinian solidarity around the world as it was worn by the leader of the Palestinian Liberation Organization Yasser Arafat. With theÂ keffiyeh prominently displayed, protesters gathered in District Six on Saturday morning. traffic –nounÂ  (‘tra-fik)
all the vehicles driving along a certain road or in a certain area/ the movement of airplanes, ships, etc., along routes /the amount of people who pass through a certain place or travel in a certain way

“We estimate there are well over 30,000 people, and the figure could be as high as 50,000,” Cape Town’s executive director for safety and security Richard Bosman told Sapa. Others however believe that the march was much, much larger than city officials andÂ is believed to have beenÂ one of the biggest, if not the biggest,Â the city has seen. boycott – Â verbÂ (ËˆbÉ”ÉªkÉ’t)
To withdraw from commercial or social relations with (a country, organization, or person) as a punishment or protest.

As the call for boycott, divestments and sanctions against Israel gathers support in South Africa,Â Â Woolworths has been singled out for attention. The retailer insists that less than 1% of its goods are sourced abroad. Demonstrators called for the expulsion of the Israeli ambassador to South Africa. And while the South African government has rejected the calls to expel the Israeli ambassador, but in case government needs some guidelines.Â The 1961 Vienna Treaty on Diplomatic Relations, says, “The receiving state may at any time and without having to explain its decision, notify the sending state that the head of the mission or any member of the diplomatic staff of the mission is persona non grata or that any other member of the staff of the mission is not acceptable. In any such case, the sending state shall, as appropriate, either recall the person concerned or terminate his functions with the mission.”Â Expelling a diplomat, even an ambassador, is however not the same thing as severing diplomatic relations, which the mostÂ dramatic step one country can take against another. solidarity –noun ËŒ(sÉ’lÉªËˆdarÉªti/)
unity or agreement of feeling or action, especially among individuals with a common interest; mutual support within a group.

When Minister in the presidency Jeff Radebe was quizzed about government’s stance on the calls for a boycott of Israeli goods, he said:Â â€œWe want peace in the Middle East. We are committed to facilitating the resolution of the conflict there. That is why [President Jacob Zuma] sent special envoys [to Palestine]. So thatâ€™s the position of the South African government.” apartheid –nounÂ (É™ËˆpÉ‘ËtheÉªt,É™ËˆpÉ‘ËtÊŒÉªd/)
a policy or system of segregation or discrimination on grounds of race.

As protesters listened to speakers at the conclusion of the march, parallels between South Africa’s near history and the Palestinian reality were repeatedly evoked.