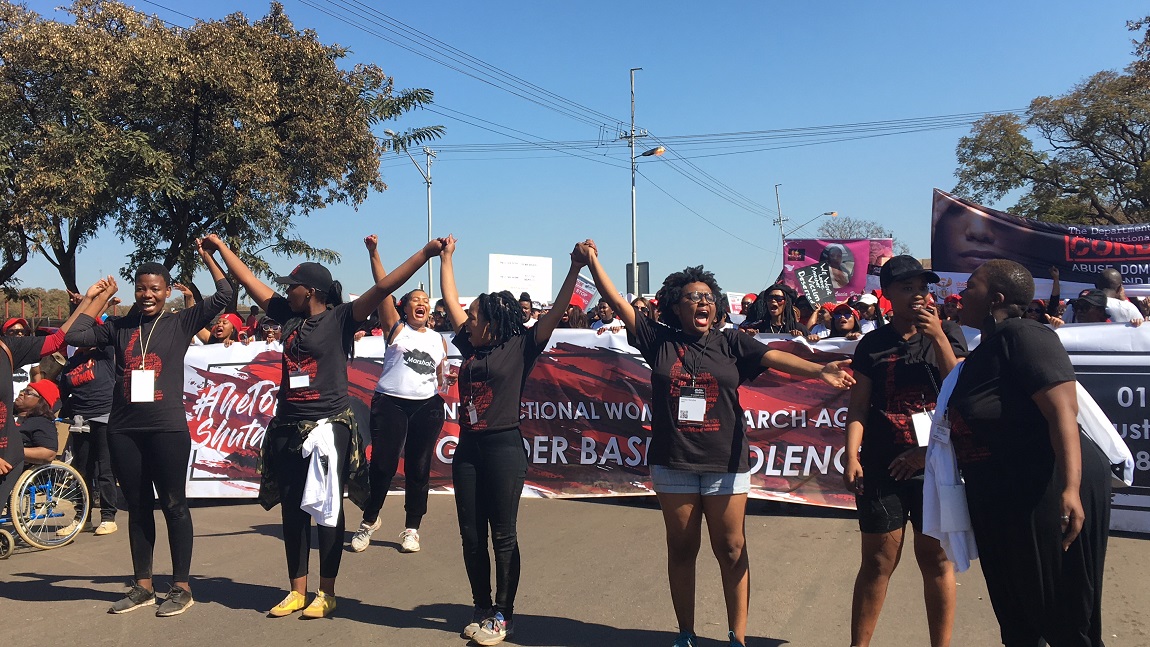 Spirits were heightened as womxn* gathered at the old Putco depot in Pretoria on Wednesday before the Total Shutdown march began. We were singing and dancing and chanting. There were black, Indian, white and coloured womxn, lesbians, transwomxn, gender non-conforming people, differently-abled womxn. It was truly an intersectional march. All united behind a single cause: to eradicate the gender-based violence that we face every day. SHAAZIA EBRAHIM and FATIMA MOOSA reflect on covering and being part of the march.

There were no men allowed at the march. This was refreshing. It was the first march we went to where we did not have to fear being catcalled, harassed, groped and shoved. Womxn understand the concept of personal space much better than most men who disregard it. The march stood in sharp contrast to the 100 Man March that took place in Pretoria in July. Instead, there was a camaraderie among the womxn that comes with having a shared struggle and a shared goal.

#TotalShutDown in Durban: “I Am Here To Send A Strong Message”

The only men present were the reporters and police officers. While we understand why it was necessary for male journalists and photographers to document the march, at times it felt intrusive. Even voyeuristic. It was uncomfortable that womxn were baring their pain and bodies only for men to shove cameras in their faces to get a story.

There were not that many white womxn present at the march. But there was no shortage of television and media houses who it seemed, at the beginning, only to be only speaking to the white people present at the march. It might have been a once-off thing but it’s always important to reflect on space and whose voices get amplified.

There was the powerful cry from one of the womxn in the crowd who called to her rapist saying despite what she had gone through, she was here. That also seemed to be a strong message from the march. Everyday womxn in South Africa are subjected to violence and yet despite that we still are here and standing.

Suddenly, it seemed that we had collectively remembered why we were marching. We all shared the pain of violence on our bodies. Some had worse experiences than others but we could all relate to each others pain.

#TotalShutdown: “We Are Dying At The Hands Of Men, It Has To Stop”

When we arrived on the lawns in front of the Union Buildings, there was a feeling of awe. For the first time we could see how many womxn had made it to the march and the feeling was overwhelming. There were thousands of us. It was a magnificent sea of black and red all gathered together.

On the lawns, there was a short programme by the organisers. What struck us was when they shared anonymous stories of womxn who’d survived gender-based violence. There were stories from lesbians threatened with corrective rape, wives who had been brutally beaten, a womxn who was gangraped and thrown out of a taxi to die. The experiences of foreign national womxn who are refused healthcare and justice when they are abused was particularly heartbreaking. We were left feeling mournful but also proud of these womxnsâ€™ bravery.

The organisers of the shutdown from the beginning insisted they would only be handing over the memorandum of demands to President Cyril Ramaphosa. Minister Naledi Pandor who came out to receive the demands was turned away. The crowd chanted “Uphi Cyril?! Uphi?!”

Most of the people gathered at the Union Buildings left after a while but a large group of the womxn remained, firm in their decision to only give the demands to Ramaphosa. It was only late on Wednesday that the President decided to head to the Union Buildings to meet with the womxn. It’s hard not to feel like he only came out there because of the public outcry that might have followed. Which uncaring president leaves citizens out in the cold and dark and refuses to meet with them.

There is also the looming 2019 elections which, as the womxn at the march said, would not happen if their demands are not met. It’s difficult not to be cynical. We hope those in government with the power will answer the demands and bring about meaningful systemic change with regards to gender-based violence in South Africa.

*The term “womxn” is used intentionally to be inclusive of all femme identifying bodies, not just cisgendered women.