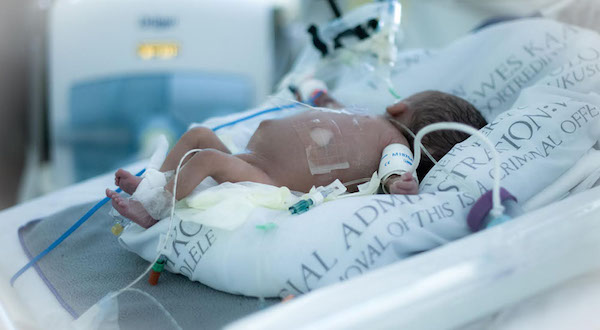 Tucked away in a separate building behind Groote Schuur Hospital, is a tiny unit doing extraordinary work for tiny people.

â€œPeople in the main hospital donâ€™t even know we exist,â€ said Yaseen Joolay, a neonatologist at the hospital.

Joolay is part of a dedicated team of specialist doctors and nurses working to care for some of the thousands of babies born prematurely each year.

In South Africa, 1 in 7 babies are born premature and last year the hospital admitted 2,400 premature babies. Of these, about 520 had a birth weight of under 1.5kg and requiredÂ high intensive care in the first weeks and months of their lives.

Many women who give birth prematurely either either suffer from preeclampsia â€“ a pregnancy illness associated with high blood pressure â€“ or have not received early antenatal care. Early antenatal care is essential as it allows doctors to track the health of the baby and mother, intervene with appropriate care when required, and prepare the baby if conditions indicate the baby is vulnerable to prematurity, which usually carries dangerous complications.

Premature babies have low immunity and are at risk of brain bleeds and brain degeneration. Their skin is fragile and breaks easily, which can expose them to harmful infections. Immature lungs are also a major health risks for babies, and because they donâ€™t produce enough surfactant â€“ a protein in the lungs which allows air to diffuse into the blood stream â€“ so they can easily contract respiratory stress syndrome, and this in turn can quickly lead to death.

â€œâ€˜Our days are like a rollercoaster. When we look after babies we take things hour by hour, not even day by day, because things can change from hour to hour,â€ Joolay said.

The biggest complication, Joolay said, is access to breast-milk.

â€œWhat we want to really feed them is breast-milk, their motherâ€™s own breast-milk because theyâ€™re able to digest that better than say formula milk,â€ Joolay said.

In premature babies, formula milk is associated with necrotising enterocolitis, the infection and inflammation of the gut to the point where parts of the gut become gangrenous. Once the condition develops, babies need to undergo surgery to remove the gangrenous parts of their gut, and from there on problems can snowball.

Social dynamics have also played into the scarcity of breast-milk in the neonatal unit. While a baby could stay at hospital for three or four months, its mother will have been discharged long before then.

Often donor breast-milk, which has a different composition to the birthmotherâ€™s milk â€“ becomes necessary but there is not always enough of it.

Mothers who are able visit the clinic regularly, watch over their babies in cramped and overcrowded conditions. The hospital may see thousands of premature babies annually, and care for hundreds of tiny preemies who require high care, but its neonatal unit only 75 beds.

According to regulations neonatal patients should have a 12m2Â Â space around their incubator. They currently haveÂ 3m2.

Equipment lines the corridors of the neonatal unit and narrow gaps between the incubators leave little room for people to pass by one another.Â If any equipment needs to be cleaned, it needs to be moved out into a passage because of the space limitations.

The hospital is currently trying to raise R26-million within the next three years, through its Little by Little campaign, so that its neonatal unit can be extended. Stickers that can be bought for R10 have been distributed to various retailers; 12,000 stickers have already been sold, and R1-million raised.

Joolay believes that helping the unit could help not just the mothers and babies it serves, but also others across the country.

â€œWe want to create a model of excellence and then roll the model out into other hospitals that need assistance,â€ Joolay said.

If you would like to support the Newborns Groote Schuur Trust you can purchase stickers for R10 at your nearest Naartjie kidsâ€™ clothing store, KidsRUS, or Hirsch store. You can also visit their website.

– Photos courtesy of Ilene Slabber and the Newborn Trust.