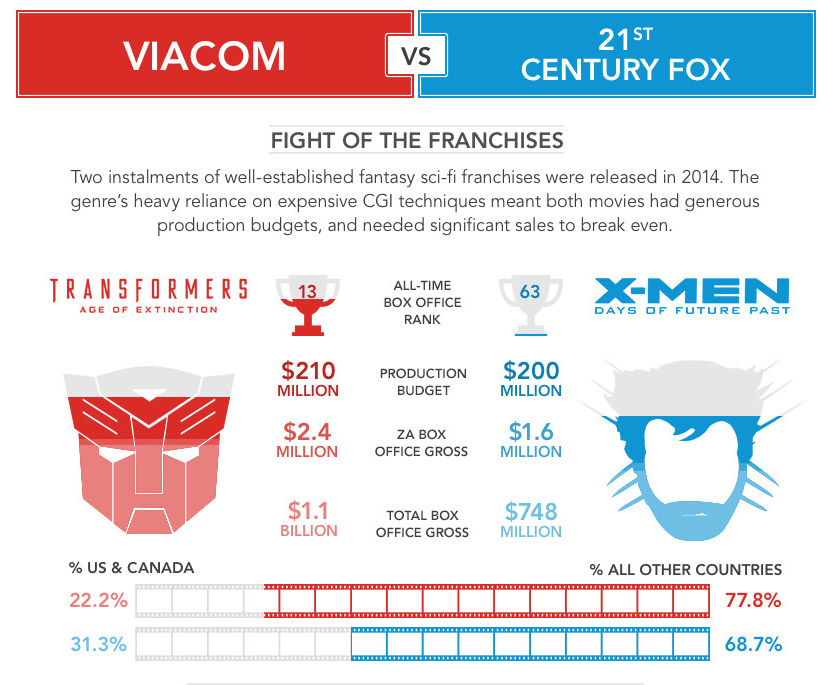 For fans of fantasy science fiction, 2014 was an excellent year because two hugely popular franchises released their latest instalments. They were Transformers Age of Extinction, the fifth film in Paramount Pictureâ€™s ongoing saga, and X Men Days of Future Past, the seventh film in 20th Century Foxâ€™s 15-year-old franchise. Both films hit movie theatres across the world to massive excitement.

Mark Wahlberg led a star-studded cast in Transformers Age of Extinction, which picked up the gripping Transformers story following a huge battle that has all but obliterated humans and the Earth. A terrifying and ancient force determined to conquer the planet is defeated, with the Autobots lending a hand to save the day. Similarly, X Men Days of Future Past is about otherworldly creatures fighting to protect humanity from evil. Actor Peter Dinklage plays Dr. Bolivar Trask who creates the Sentinels, robots who become uncontrollable and must be conquered by time-travelling hero Wolverine, played by Hugh Jackman.

In South Africa, it was Transformers Age of Extinction that was most successful. The film took $24.9 million gross at the box office, while X Men Days of Future Past did almost as well with $21.1 million gross. The films had similar high budgets – $210 million and $200 million respectively. However, when it came to total box office sales worldwide, Transformers Age of Extinction parted company from X Men Days of Future Past. The Michael Bay directed film earned $1.1 billion, making it only the second film in the Transformers franchise to cross the $1 billion mark. By comparison, the latest X Men instalment took home $748 million.

So, what about the studios behind these two epic pieces of fantasy fiction? Shares trading company IG have long understood the importance of a strong franchise performance to overall studio success. X Men Days of Future Past was created by 20th Century Fox, which is owned by 21st Century Fox. Transformers Days of Future Past came out of Paramount Pictures. How did the fortunes of these two major Hollywood studios fare is this fantasy face-off? Transformers Days of Future Past did particularly well in China, becoming the countryâ€™s highest-grossing film ever with $300 million. That money contributed to Paramount Pictureâ€™s achieving a total overall gross, across all of its films of $3.25 billion. However, even this huge result wasnâ€™t enough to beat 21st Century Foxâ€™s effort. This studio garnered $5.8 billion total gross across all films. Perhaps the most stand-out figures were the overall share price performances of the two studios. While 21st Century Fox saw its share price rise overall by 8.58%, Paramount Pictures endured a drop in share price of a considerable 19.24%. Ultimately, this has to lead us to conclude that if an overriding winner must be named, it is the 21st Century Fox film that emerges triumphant.