Home As Told to “The festival will leave us with rich knowledge about literature” – Inanda...
WhatsApp
Facebook
Twitter
Email
Print 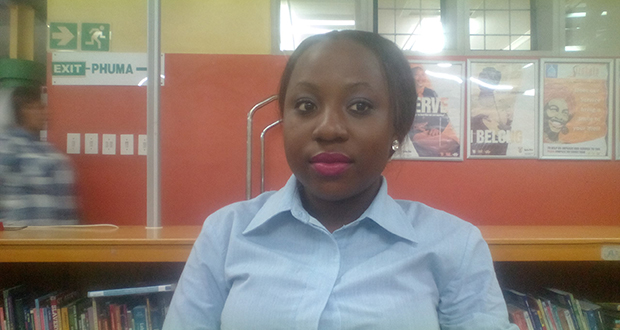 When it was announced that this yearâ€™s Time of the Writer will be held in the townships of Durban, the list wouldnâ€™t have been complete without the mention of Ohlange at Inanda. The township boasts a rich political history; it was where Nelson Mandela cast his first vote in 1994 at Ohlange High school. The second day of #TOW2016 held at Ohlange library also proved to be a success according to NONDUMISO MAWABA, a worker at the library. Kwazi Dlamini spoke to her about the library and the festival.

How does it feel to host an event of this magnitude?

We are happy to have been given the chance to host this event. It is not every day we get to be part of something this great, and it was really an honour for us. We got the opportunity to see the publishers and authors. It shows that we are being recognised and after having this event here, that will make us more recognisable. Whoever came up with the idea of bringing it to the township really helped us.

How will this festival help the library and the community of Inanda?

The festival will leave us with rich knowledge about literature. We were told what you needed to do to write a successful book and our patrons seemed very attentive. Also, for us as librarians, now we will be able to distinguish which books are good for our visitors and which ones are bad for them as well. The most important [thing] is that the community is inspired to start reading and writing, not for immediate rewards but to keep their minds afloat with knowledge. Young writers were eager to meet publishers to get information on theÂ proper way to follow if you want to be a writer or publisher.

I personallyÂ learnt about writing; I learnt how much time it takes to write a book and the process. I did not need to be inspired by this festival to read, I am currently reading a book by Maeve Binchy. What do you do as the library to promote African literature?

We have internal programmes in the library to promote African literature; we take out brochures, pamphlets and put posters in the library and sometimes in the streets. We have had events before to promote and support local writers but they were never as big as this one. Honestly speaking, we are lacking when it comes to African literature. We donâ€™t have many African books – that is our problem at the moment. We have a section for local writers in the library but it is not doing very well in terms of readership. People usually go for the romance and most of them are by foreign authors. It would be better if the municipality supplied us with more African books and we can promote them.

The writers who are present at this yearâ€™s Time of the writer, do you have any of their books in the library?

I donâ€™t clearly remember because we deal with a lot of books every day so I cannot really say. It is likely we donâ€™t have them – we are lacking African literature. It is such an embarrassment to have people visiting us yet we donâ€™t have their books on our shelves. I heard the panel saying the festival is coming back next year; maybe by that time the African literature section will be sorted.

What resources do you have to help young people who have been inspired to start writing?

We have some of the resources that can help them but they are not enough for the whole community of Inanda. We only have six computers for the whole library and you cannot expect six computers to cater for such a huge population – it is really difficult. We have a printing machine [with which] they can print their work after finishing writing but it is currently not working at the moment.

As one lady said on the panel, this is just the beginning of great things. We just hope those great things come with equipment for the library and we can also produce our own writers. The equipment gets really busy on Saturdays and becomes difficult to operate with just six computers. We normally have approximately 150 visitors a day during the week – on Saturdays, that number doubles.