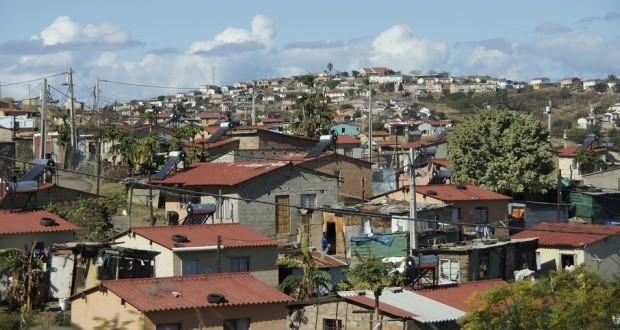 The gospel of growth continues to be touted by many as the cure-all to South Africaâ€™s economic woes – be they unemployment, poverty or inequality. Unfortunately like all dogma, “economic growth heals all” is shamefully dishonest. TO MOLEFE takes a step back to present a more complete picture of inequality and why it matters so much.

Herman Mashaba, the recently announced Democratic Alliance candidate for mayor of Johannesburg, sometimes imagines the economy as a cake; other times a pieÂ . But no matter the form of baked good it takes, the economy in his mind is round and cut into slices allocated to each person. Mashaba also readily admits that the slices of this cake, or pie, or strawberry tart, are unequal in South Africa, as they are in the rest of the world.

Some, for instance, white households, have much bigger slices than others.

Donâ€™t change how the cake is sliced, as policies such as progressive and wealth taxes, social security, land reform, or broad-based black economic empowerment attempt to do. Rather, Mashaba says, make the cake bigger.

Mashabaâ€™s baked-goods metaphor has a number of problems, least of which being that itâ€™s not Banting friendly. The biggest problem is that it considers only one aspect of inequality – the inequality of outcomes. And if you only consider one aspect of an issue, youâ€™re bound to propose inadequate and inappropriate solutions, as Mashaba has in punting economic growth as the answer to all our woes.

Inequality as a moral failure
A more complete way to look at inequality and economic growth is by considering also the distribution of access to opportunities in an economy. These opportunities shape the economic outcomes possible for each person. The outcomes, in turn, in a market-based economy, determine the opportunities accessible not only to that person but their dependents, too.

Take education, for example. We know in South Africa that we have a two-tiered education system; high-priced functional schools for the richer (or those with access to credit), and dysfunctional schoolsÂ for the poorer and mostly black. The system is a legacy of the apartheid regimeâ€™s policy of separate development; a legacy the post-1994 democratic governments have failed to undo.

Fewer in number and disproportionately white, students who attend functional schools generally demonstrate better literacy and numeracy, higher pass rates and drop out less frequently than their counterparts in poorer schools. This isnâ€™t because theyâ€™re inherently smarter or more capable; itâ€™s that their schools and the communities in which they are located have the resources that allow them to realise as much of their full potential as they are willing to work for.

Sadly, the hundreds of thousands more who attend dysfunctional schools are not afforded the same, no matter how hard they work. The educational outcomes possible for them are limited by a lack of facilities such as libraries, science labs and computer equipment, teachers with inadequate subject-matter knowledge, and much higher teacher-to-student ratios. These schools are also located in underdeveloped, mostly rural areas or in communities whose members have also been denied historically equal access to educational opportunities.

These inequalities, which result in unequal educational outcomes, continue into higher education.Â They also result in inequalities in earnings and employment later in life – the better educated you are, the more likely you are to be employed and the higher your income.

Most importantly, however, such inequalities make it clear the problem is as much, if not more, a moral issue as it is an economic one. It is simply wrong that as random a factor as the household, racial group or gender into which someone is born determines or limits what they can or will achieve.

Economic growth as a solution does not even begin to scratch the surface of the problem. Instead, overemphasising economic growth has allowed inequalities in income and wealth, and therefore access to opportunities, to remain stubbornly high in South Africa. At present, as much as 65% of total income goes to the top 10% of income earners, and white men make up the majority of the top 1% of earners.

Inequality as anti-democratic
One of the clearest points emerging from research in this field is that while inequality appears an inevitable outcome of capitalism, its extent is the result of political contestation. Thomas Piketty puts this argument across strongly in his book, Capital in the 21st Century. Put more simply, the wealthier you are in a market-based democratic economy, the greater the say you and those with shared interests have over laws and policies, including those that might curb inequality, the price at which labour is bought or sold, for example.

However, few national economies at present are closed systems; globalisation has linked most but unequally so, creating a democracy leak.

Only capital has the freedom to flit around the globe in search of the best returns, whereas workers seeking the fairest labour prices and practices are met by often insurmountable immigration regulations, prohibitive bureaucracies and brutal anti-immigrant crackdowns, even in the most liberal of democracies. And there is also no such thing as a global democracy, meaning that political contestations over the price of labour remain national affairs, creating differences in prices and conditions for the exact same work in different countries.

Driven by the profit motive and the pressure to meet the expectations of investors in financial markets, companies have exploited these differences in labour price, disinvesting from economies like South Africa, where workers have political rights enough to have a fair say in labour prices and practices, and investing in places like neighbouring Lesotho and China, where they donâ€™t. Either that, or they have substituted workers for technology.

This democracy leak has been among the primary reasons why poverty persists in South Africa, and unemployment and income inequality remain high. It is also a significant factor in why workersâ€™ share of total non-agricultural income has declined since 1993Â and the growth in real wages has not kept up with the growth in productivity.

Given this, itâ€™s unsurprising that proposals such as instituting a national minimum wageÂ have garnered such resistance from proponents for the free market like Mashaba, whose idea of freedom is freedom for the owners of capital only. Rather than look at inequality as an economic and moral failure exacerbated by the lack of a global democracy, theyâ€™d rather, to appease their constituencies and no one else, make easy-to-digest but anaemic appeals for growth. However, it is only once we look at inequality honestly and in its entirety that we might be able to devise real solutions.

The Daily Vox, in partnership with Oxfam SA, will be highlighting the challenges of socio-economic inequality in a special series this month.Â

TO Molefe is the author of For Blacks Only and Other Ways of Being, a soon-to-be-published collection of personal essays guided by black consciousness, intersectional feminism and ubuntu.
Featured image via PixabayÂ