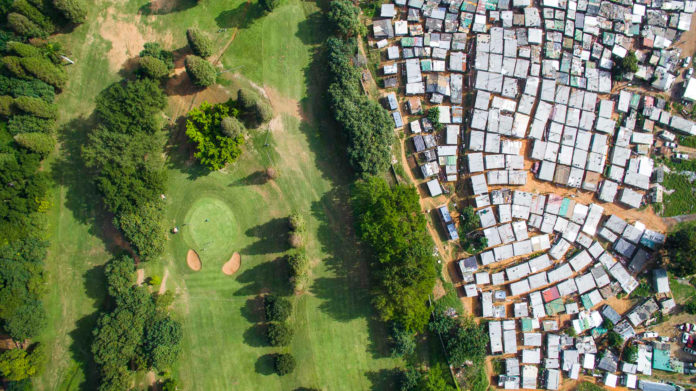 South Africa has been described as the most unequal society in the world. The racial and economic legacy of Apartheid has evolved into an economic segregation between the haves and have nots. The July 2021 protest action and civil unrest shone a spotlight on the glaring inequalities in the country. The Daily Vox team has decided to take a closer look at the state of South Africa’s inequality.

The Gini coefficient provides an index to measure inequality. It compares how the distribution of income in a society compares with a similar society where everyone earned exactly the same amount. Inequality on the Gini scale is measured between 0, where everyone is equal, and 1, where all the country’s income is earned by a single person.

Current statistics show South Africa is somewhere between 0.65 and 0.68.

“The COVID-19 pandemic has exposed how fractured South Africa’s democracy is, and just how unequal we are as a society. The biggest ticking time bomb we have in this country is inequality,” said Busi Mavuso, the chief executive officer of Business Leadership South Africa during a discussion at the University of Cape Town.

Statistics South Africa listed the unemployment rate at a new record high of 32.6% in the first quarter of 2021. The United Nations Human Development Report (HDR) published in 2020 indicates that about 11 million South Africans live on less than R28 a day. With this amount a person can only buy one loaf of bread, and one litre of milk! The report looks at the concept of “multidimensional poverty”. This looks at poor health, malnutrition, a lack of clean water, inadequate access to healthcare,  and housing conditions.

According to the HDR, nearly four million South Africans are in this state of multidimensional poverty.

According to the South Africa General Household survey conducted by Statistics South Africa in 2018, there is a large gap between population groups in access to higher education. Out of the 20-30 000 households surveyed, its findings showed that 12% of white people and 11.5% of Indian people had access to tertiary education. The numbers were significantly lower for Black and Coloured people.

In the latest Quarterly Labour Force Survey (QLFS) by StatSA, South Africa’s unemployment rate currently stands at 32.6%. The data for young job seekers show that unemployment between 15-3 year olds is at 46.3% with 9.3% of unemployed jobseekers being university graduates. According to the Quarterly employment statistics (QES) survey released by Statistics South Africa (Stats SA), more than 600 000 formal sector jobs have been lost since the Covid-19 lockdown.

The Oxfam South Africa report published in 2020 states that nine out of ten Black households in South Africa do not have medical aid. The report showed  that 10% of households headed by a Black person can afford medical aid in comparison to 70% of white-headed households.

Russell Rensburg, director of the Rural Health Advocacy Project, says South Africa’s biggest problem is that the health needs of people exceed capacity. Rensburg says there should be explicit priority in determining who accesses key healthcare services, given the levels of poverty and inequality.

The Oxfam report stated that the average white, male CEO earns the same as 461 Black women in the bottom 10% of earners. Over 30% of Black women in South Africa are employed in low-paying care positions. The average monthly income of a Black woman is just R2,500. This is in comparison to a white woman in the same position who on average earns R10,000.

The World Bank in reflection of South Africa’s development says the country has a dual economy with persistently high inequality rates.

“The inequality is perpetuated by the legacy of exclusion, and low intergenerational mobility; inequalities passed down from generation to generation.”

The government has committed to addressing poverty, inequality and social exclusion. The mandate is laid out in the government’s National Development Plan (NDP).The plan is a blueprint for eliminating poverty and significantly reducing inequality by 2030.

The NDP was launched in 2012, and has been described in 2019 as seven years on and no progress to speak of.  Calvin Motlau, engagement manager at Frontline Africa argues that one of the NDP’S main problems is the implementation or lack thereof.

Dr Nelia Orlandi, a researcher from Stellenbosch University (SU) said in 2020 the NDP is lagging behind.

“When looking at the 2014-2019 Medium Term Strategic Framework (MTSF), the first of three five-year implementation plans for the NDP, I found that not all planning concepts are in line with the planning concepts of the standard accountability, planning and budgeting documents of government,” Orlandi said.

The BER report says South Africa shows progress in some areas, though outcomes have fallen short of the NDP’s aspirations in several key indicators. “The Covid-19 pandemic has highlighted and intensified many of South Africa’s developmental challenges. Strong corrective action is needed, ” the report concluded.

On July 18, President Cyril Ramaphosa said the government is currently investigating the feasibility of introducing a basic income grant in South Africa. “We are giving active consideration to the grinding poverty that we continue to see in our country. We need to address the structural inequalities in our economy,” he said. The calls for a universal Basic Income (UBIG) grant have been growing from civil society and broader society.

Combating inequality will take a concerted, deliberate and effort to implement and follow through on policy that translates into something tangible – equality.