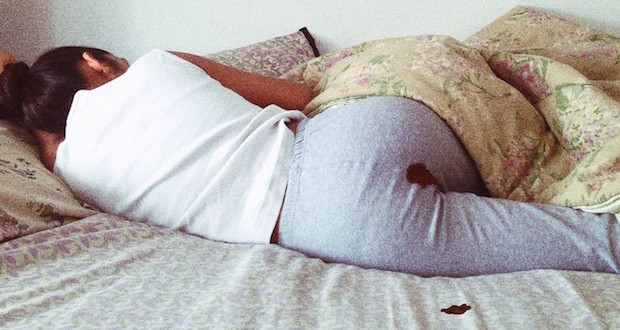 Rupi Kaur, a Canadian poet and artist, took on Instagram after the social media network removed a self-portrait of Kaur with a spot of blood on her pants, blatantly showing that in the 21st century, women on their period are still unacceptable.

Kaur this week posted a statement to Facebook and Tumblr saying that Instagram had taken down the photograph for â€œviolating community guidelinesâ€. In the image, which forms part of a photo series titled â€œPeriodâ€ that she is working on together with her sister Prabh Kaur, she lies curled up in bed, fully clothed, with a bloodstain on her pants and on the sheets.

â€œI will not apologise for not feeding the ego and pride of [a] misogynist society that will have my body in underwear but not be okay with a small leak, when your pages are filled with countless photos/accounts where women (so many who are underage) are objectified, pornified, and treated [as] less than human,â€ Kaur wrote on Tumblr.

thank you @instagram for providing me with the exact response my work was created to critique. you deleted a photo of a woman who is fully covered and menstruating stating that it goes against community guidelines when your guidelines outline that it is nothing but acceptable. the girl is fully clothed. the photo is mine. it is not attacking a certain group. nor is it spam. and because it does not break those guidelines i will repost it again. i will not apologize for not feeding the ego and pride of misogynist society that will have my body in an underwear but not be okay with a small leak. when your pages are filled with countless photos/accounts where women (so many who are underage) are objectified. pornified. and treated less than human. thank you. â €â €â €â €â €â € â € â €â €â €â € â €â €â €â € â € â €â €â € â € this image is a part of my photoseries project for my visual rhetoric course. you can view the full series at rupikaur.com the photos were shot by myself and @prabhkaur1 â €â €â €â €â €â € â € â €â €â €â € â €â €â €â € â € i bleed each month to help make humankind a possibility. my womb is home to the divine. a source of life for our species. whether i choose to create or not. but very few times it is seen that way. in older civilizations this blood was considered holy. in some it still is. but a majority of people. societies. and communities shun this natural process. some are more comfortable with the pornification of women. the sexualization of women. the violence and degradation of women than this. they cannot be bothered to express their disgust about all that. but will be angered and bothered by this. we menstruate and they see it as dirty. attention seeking. sick. a burden. as if this process is less natural than breathing. as if it is not a bridge between this universe and the last. as if this process is not love. labour. life. selfless and strikingly beautiful.

She reposted the photo on her Instagram account, thanking the social network for proving her point that â€œa majority of people, societies, and communities shun this natural processâ€ of menstruation.

Kaur and her sister produced the photo series for a visual rhetoric course at the University of Waterloo.

The poet may be based in Canada, but women around the world are made to feel shameful about their periods. Akhona, a young high-school learner in Cape Townâ€™s Langa township, shared the extent to which girls in poverty-stricken communities exclude themselves from society if they cannot afford sanitary towels.

â€œSometimes if I keep on asking the neighbours for pads they donâ€™t give me because they keep on saying why donâ€™t I buy them in advance. They do not know that I do not have money for them,â€ she told GroundUp.

Akhona sometimes uses a sock filled with sand to absorb the blood so she can leave her house. According to Unicef, at least one in 10 girls in Africa will miss school if they are on their period.

Clearly, that women have their dignity compromised or are found offensive because they are on their period is more unnatural than a period itself. But Kaurâ€™s efforts have shown that in challenging the status quo, women can make a change. After being pounded with comments and messages related to Kaurâ€™s photo, Instagram put her photo back online, saying that a member of their team â€œaccidently removedâ€ it.

Kaur responded on Facebook saying to her followers â€œWe are a force to be reckoned withâ€, and we certainly believe her.