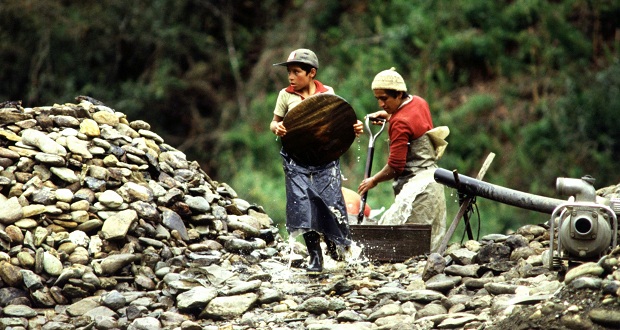 According to Human Rights Watch, 168 million children are involved in child labour, including 85 million who take part in hazardous work that endangers their health or safety. Global standards on business and human rights are merely voluntary, so not all companies abide by them. Here’s a list of at least five businesses that have been shown to benefit from child labour.

1. Apple, Sony and Samsung
Some of the worldâ€™s most lucrative technology brands, Apple, Sony and Samsung, among others, have been reported to reap the benefits of child labour in their supply chains. In a report by Amnesty International,Â it was found that cellphone manufacturers were failing to do basic checks to make sure that cobalt mined by child workers was not used in their products. Cobalt is used in lithium-ion batteries, and the report traced the sales from mines where children as young as seven work in dangerous conditions. The companies all claim to be investigating the allegations, and sayÂ they have zero-tolerance approaches to child labour.

In 2007, the company signed a dealÂ to buy fair-trade and organic cotton from Burkina Faso, where child labour is prevalent in the production of its cotton. This move was supposed to support African farmers, especially women, but it turned out to be not so fair to the childrenÂ who were being exploited.

3. H&M
This retail giant that launched in South Africa last year has been caught up in scandals involving the use of sweatshops. In 2010, a sweatshop in Bangladesh which supplied H&M with goods caught fire and killed 21 workers.

In February this year, H&M admitted to â€œfindingâ€ Syrian refugee children working in their factory in Istanbul, but whether this has led to closer interrogation of their labour practices is still unclear.

4. Disney
Donâ€™t be fooled by Mickey Mouse and Princess Elsa. The much-loved company that markets its toys, clothing and movies to children was discovered in 2011 to have used child labour in sweatshops, with some workers as young as 14. The sweatshops provide Disney with clothing were predominantly in China, Haiti and Bangladesh.

5. All the chocolate companies
The knowledge that almost all chocolate makers have been caught up in some form of child labour or another is pretty disheartening for chocoholics out there. NestlÃ©, Hershey, Mars, Kraft, ADM Cocoa, Godiva, Cadbury and Fowlerâ€™s Chocolate have repeatedly been accused of using child labour in the production of their treats.

Way back in 2000, a documentary exposed the use of child labour in the cocoa industry. Fast-forward 15 years, and a Fortune magazine report released in March this year has shown that the number of children exploited in the industry has risen to about 2.1 million. These children work predominantly in Ghana and CÃ´te dâ€™Ivoire, which accounts for 60% of global cocoa production.

Whether or not these businesses know the extent to which child exploitation exists in their supply chains is important, as they need to stop profiting from these practices. But we as consumers should always interrogate who is in fact producing the goods we simply must have.