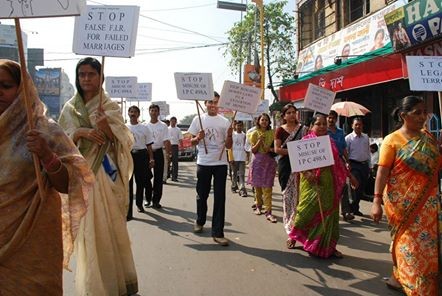 When I think about â€œmenâ€ â€“ the men that come up in conversations that usually end on some variation of â€œmen are bastardsâ€ – Iâ€™m not thinking about my father, cousins, husband or son, all of who are wonderfully warm and caring people.

I think about the guy at university who told me that â€œAll things being equal, a woman will never be as smart as a man,â€ the men who force themselves on girls in out of the way rooms and passages, who have abused children, who beat their wives or financially entrap them in abusive relationships or destroy them emotionally, the ones who leave their wives for other women or disappear from their childrenâ€™s lives, refusing to support them financially or emotionally.

You may think Iâ€™m rattling off a list of clichÃ©s but sadly, I have personally known women who have been put through all of the situations Iâ€™ve mentioned here.

So when someone tells me that today is International Menâ€™s Day, I canâ€™t help but roll my eyes and think â€œUn-frikkin-believable.â€ Men donâ€™t need a special day of pampering, they need a day to take a long, hard look in the mirror.

National “Let us stroke their ego and show them that we know that not all of them are abusers” Day. In short, National Men’s Day.

And then I stop, and ask myself whether Iâ€™m being entirely rational. (Answer: no.) Because when you look right at it, is there really a problem with holding a special day to raise issues affecting men and boys? Women bear the brunt of gender inequality in society. But thatâ€™s not to say that men have an easy time of it. Almost five times as many men commit suicide as do women in South Africa. This has been linked to poor health-seeking behavior in men â€“ men are much less likely to seek help when theyâ€™re feeling depressed. This failure to seek medical help also increases the risk that illnesses such as testicular cancer will be caught late.

On paper, International Menâ€™s Day doesnâ€™t seem like a bad idea at all. Itâ€™s aims are to promote positive male role models, celebrate menâ€™s positive contributions to society, focus on menâ€™s health and well being, highlight discrimination against men, improve gender relations and promote gender equality and create a safer, better world. The theme for this year? â€œWorking To Expand Reproductive Options for Menâ€ All of these ideals would help build a more equal society and one that is better for men and women. Men who want to take responsibility for their reproductive health? Hallelujah! The problem though is the way the celebration of Menâ€™s Day has been linked to the menâ€™s rights movement. Donâ€™t get me wrong â€“ men have rights and their rights should be protected and promoted, as womenâ€™s rights should be protected and promoted. The problem is the intersection between the more radical and hate-filled elements of the menâ€™s rights movement and the feminist movement. That way lies a deep pit of hate, vitriol and stupidity that no sane person would ever want to dip into. Here in South Africa we have bigger fish to fry.

So if youâ€™re a woman in South Africa and someone tells you itâ€™s international menâ€™s day, you probably donâ€™t immediately think to take your wonderful dad out to a steak dinner; you think about the guy you know put his girlfriend in the hospital and then you think â€œOh, hell no.â€

For a lot of women, itâ€™s not the idea of celebrating men and wishing them healthy, happy lives that grates. Itâ€™s the reality that here, men are often perceived as a threat to women. A lifetime of personal experience has shown us that itâ€™s not unusual for men to treat women badly.

We joke about it when we tell people â€œIf you hurt my friend, Iâ€™ll come after you.â€ We never question our assumptions that any given man is a potential threat.

In a peaceful society where there was greater gender equality, where men and women are not set up in opposition to each other but in alliance, where we treat each other with respect, where we are free to choose whatever social roles we wish without any prescripts of what is â€œmanlyâ€ or â€œwomanlyâ€, no one would bat an eyelid at the mention of a Menâ€™s Day or a Womenâ€™s Day.

Unfortunately, we donâ€™t live in that society right now. One in four South African men has admitted to raping a woman, and every day, three women die at the hands of their intimate partner. For South African women, men are a very real threat, and the idea of celebrating men, as a generic group, does not go down easily.

In the run-up to the 16 days of activism for no violence against women and children, it’s these harsh realities that South Africans must grapple with as we ask what men and women can doÂ to build a society that protects the vulnerable and uplifts the downtrodden.