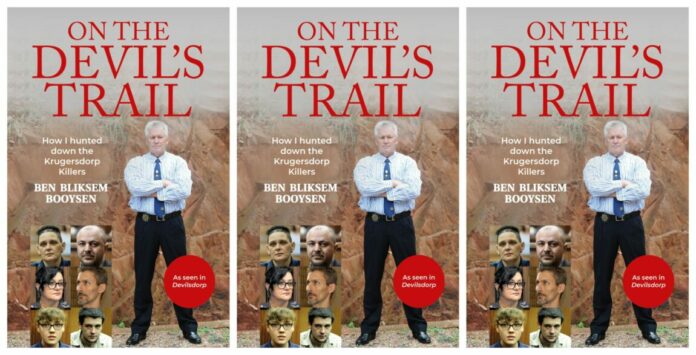 In 2016, after a string of police botches, Captain Ben Bliksem Booysen took on the Krugersdorp Killers’ case. On the Devil’s Trail: How I hunted down the Krugersdorp Killers is Captain Ben ‘Bliksem’ Booysen’s story written in collaboration with Sunday Times journalist Nicki Gules. In the book, he shares the details of police incompetence as well as new information about the killers from the Electus per Deus group.

The Daily Vox team held an email interview with Booysen.

Was it difficult writing the book and reliving in a way the entire case and investigation?

No, not at all. My notes were done meticulously during the investigation. Thus it was just a case of referring back to what I have recorded.

What did it mean for you to have written a book about the important work you did?

It was a great honor and privilege to be approached by the publisher to do this book. Ultimately it gave me closure on certain aspects of my life. I also view this as the crown to a career of 42 years within the SAPS.

The case got a lot of attention through the documentary. Why would you say having it written down in a book form is important for taking the story forward and ensuring the case stays in the national attention?

Not everyone has access to TV and podiums such as Showmax and Dstv.  This case is unique (fortunately) and access to books in SA and in the world is still more popular than visual material.  The book also answered questions which might have been raised during the documentary. Even though the doccie was four episodes of information, there is still so much more to be told. The information of the case has so many layers of information that years from now new information will still be forthcoming.

Can you speak a little about how difficult it was for you to have done this important work and gotten no recognition and thanks?

The case itself was not difficult due to my experience and expertise. The fact that I did not get recognition for what I have done was not difficult but rather disappointing.  During the course of the investigation I did not experience difficulty but rather challenges which I had to overcome. It would have been much easier if I had the support of the management. This is especially knowing how this case is going to turn out rather than being ridiculed as the ‘infamous” Ben Booysen on his own route mission.

The facts of the case were very far fetched from the start. But if I ignored it there would not have been the success we had. All’s well that ends well.  My wife Chirstelle (Col Booysen) was the only person of the last 30 years in my career who always supported me no matter what and gave me the necessary support which I required to proceed with the job at hand.  That is all I needed.

Can you explain a little about why you were so determined to solve this case and get justice for the victims?

Ever since I became a detective, “justice” has been my compass.  Whether it is a case of theft of bicycle or whether it is a murder case justice to the one who was harmed (the complainant) was always my objective. I believe it should be the only objective of any SAPS member from the onset of the crime scene to do his/her work in such a way that justice can prevail. So my determination in getting this case solved was not special due to the velocity of what was done by these evil people but just justice to all victims and their loved ones.

What was the impact of the case and writing the book on your family?

The impact of the case on my health I viewed as an occupational hazard.  Writing the book is what it is. My family and I endured it in the same way that we endured my career in the SAPS.  To anyone else it might sound like something big but to us it is just me.  This is the first time ever I have shared pieces of my career with people outside my circle. Currently the reaction to the book is somewhat overwhelming. Once again it is not just about me but about a career of 42 years which I hope can give motivation and clarity where it is needed.

Lastly, what would you tell people is the reason they should read the book?

To me I would say just do it and take from it what you need.  Everyone will take something differently from this book.  For other SAPS members, I hope it will give them something positive to look forward to in their career. For members of the public I hope that it would make them understand that even though it comes very easy to criticise the SAPS, behind every crime and officer there is always a story that you might not know of. If you knew this you would not criticise what they have to do.

Ultimately every path has its struggles and gain, its pleasure and pain.  Face your path, embrace all that comes with it, in the end, both the good and the bad have a way of leading you to a lifetime of blessings, success and peace of mind,

Published by Melinda Ferguson Books, the book is available online and at all good bookstores.