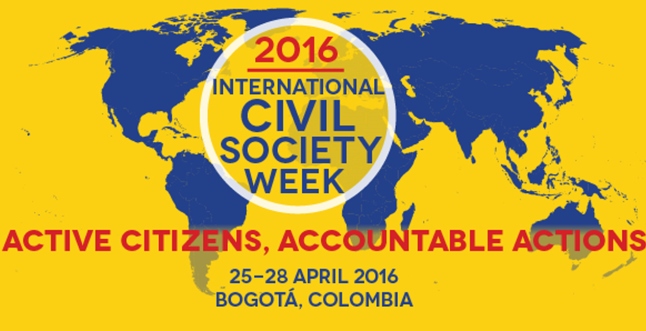 This week some 900 activists and members of civil society from 100 countries will be meeting in Bogota, Colombia for World Civil Society Week held by CIVICUS. Don’t yawn. The big meet between 25-30 April will see some of the biggest issues of our time discussed. Corruption. Repression. Inequality. Society. And love. Here’s everything you need to know about the #ICSW2016.

What is CIVICUS?
Itâ€™s basically a global alliance of civil society organisations. CIVICUS helps build movements, offering expertise, know-how, experience and infrastructure. Every year, they publish the State of Civil Society Report, offering an account of the state of civil society and the conditions it works in around the world. The World Civil Society Week brings all of these members together for a week of events, discussions, cultural events and planning.

The host: Bogota
Colombia is home to 48 million people. Bogota, the cultural and political capital of the country, plays host to some nine million people. There are many similarities to South Africa: for instance, Colombia is one of the most unequal societies on earth. According to Oxfam, 80% of land in Colombia is in the hands of just 14% of owners. And like other Latin American countries, Colombia is a highly segregated nation – of Spanish-descent-overlords and mostly poor locals. You get the drift. Then there are some differences to South Africa. We may be known for Durban poison, but Colombia is the biggest producer of cocaine, and for the past five decades, it’s been in a midst of brutal war with left-leaning guerillas. And the people are hoping that a new peace deal will end the conflict.

Colombia is battling to chart a new path, after years of devastating conflict – and civil society is likely to be at the forefront of rebuilding the country. Holding a discussion of this magnitude couldn’t have come at a better time.

#About ICSW2016
This year’s theme is “Active citizens, Accountable actions”. The program will have four tracks and scores of workshops, discussions and debates. There will be more than 20+ individual sessions over the four days.

Youth focus
Young people have been in the forefront of popular protest and dissent over the past five years. From the Arab Spring in 2011, to the Umbrella Revolution in Hong Kong in 2014 to the #FeesMustFall movement in South Africa, young people have exploded onto the scene, and taken charge of their struggles.

The dissent has been organised and anarchic at once. The rage has forced civil society to rethink its ways, and begged new answers to old questions. Inequality. Poverty. Lack of opportunity. It’s all the same. And yet, the collective rage of youth hasn’t always been welcomed in traditional civil society forums. This meeting will make the â€œcase for space”. Moreover, in another special panel on youth, young leaders from 18 countries will speak about their experience in pushing for change as non-traditional leaders; the aim will be to discuss how to incorporate fresh energy into tired structures.

Kumi Naidoo will be there
If America has its Iron Man and Captain America, South Africa has Kumi Naidoo. Facing up to human rights violators, taming the seas with Greenpeace and now taking the continent’s best to the next level with the Africa Civil Society Centre, we have little fear, when Kumi is near. Jokes aside, we all know that citizen movements are on the rise across the globe – be it in South Africa, Colombia, India – all with the aim of ending corruption. And because anti-corruption efforts are making a dent, activists are increasingly under threat from the state.

So you can imagine, ending corruption and working to build a better environment for activists to do their job will be a central theme at this year’s meet, with activists and civil society from across Latin America expected to share their experiences and discuss solutions. But Kumi won’t be the only distinguished guest: Nobel Peace Prize winner Ali Zeddini, from Tunisia’s League for Human Rights, Yara and Mazen Darwish, from the Syrian Center for Media and Freedom of Expression, and Jose Ugaz Chair of Transparency International will also be there.

Protest in the 21st Century
Protest may not be a new phenomenon, but it certainly has changed. Activism and protest no longer only means taking to the streets, burning a few tyres or signing and delivering petitions. They are still effective, don’t get us wrong. But online activism is real, and lives in the same, if not a slightly parallel universe, as far protest actions go. Civil society has acknowledged that new forms of protest needÂ to be harnessed, their energies collated and utilised to make a difference. And there will a marked attempt to discuss how technology and data collection is shaping and informing protest and dissent today. Think weâ€™re making up stuff? Consider the Facebook initiative to “mark your safety” during an attack. Or the maps citizens put together during a natural disaster. NGO DataShift describes the initiatives as â€œCreating and using data that matters: how different sectors are harnessing the power of the crowdâ€. The world has changed, and civil society will have to change too. Or get left behind.

But these are just some of the issues being discussed. Follow @thedailyvox & #ICSW2016 for updates from the big meet and take control of your life.