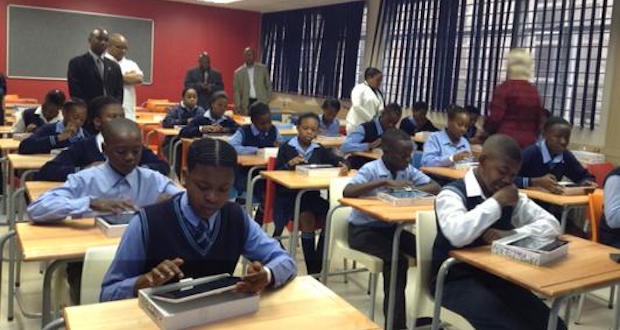 Can the use of tablets help bring South African schools up to international standards? PONTSHO PILANE looks at the benefits and limitations of the technology soon to be rolled out in classrooms across the province.

The Gauteng education department is planning to introduce electronic devices such as tablets in all classrooms by the end of the 2017/2018 financial year â€“ a move thatâ€™s estimated to cost about R17-billion in total.

Seven township schools in Gauteng have officially gone â€œpaperlessâ€ so far. Gauteng premier David Makhura said the move was â€œa revolution in educationâ€ and Deputy President Cyril Ramaphosa said the programme would boost the economy by driving e-skills and developing a multi-skilled workforce.

But is technology really the silver bullet that the officials driving this project would have us believe?

There are some obvious advantages to having tablets available in class. Tablets are interactive devices and have a novelty factor that will certainly keep learners engaged â€“ at least, at first. They are small and lightweight, which would make it easier for learners to carry all their learning materials at once, and also come preloaded with all the apps, e-books and software learners need.

But thereâ€™s no telling whether there would, in the end, be any difference between delivering textbooks and delivering tablets to school. Limpopo was the province that failed so miserably to deliver textbooks in 2012 but even Gauteng has not been without its hitches in this area in the past. In addition, once textbooks are delivered to learners, thatâ€™s it, but tablets must constantly be updated with the latest security and operating systems, as well as new apps and educational software.

Some challenges that are specific to South Africa are also of concern â€“ power, internet access, and security.

Many tablets in the market have a short battery life, especially when they are being excessively used. What happens when a tablet runs out of battery before school is over?

Although there are tablets in the market that have a battery life of up to 11 hours, this is not always the deciding factor for schools when choosing a tablet for educational purposes. With the looming Eskom electricity crisis, can we guarantee that every tablet will be charged for school?

Janet Thomson, the executive director of SchoolNet South Africa, a non-governmental organisation involved in implementing internet usage in South African schools, believes that with adequate planning load-shedding should not be an issue. â€œDoes your cell phone stop working when there is load-shedding? The tablet is exactly the same technology,â€ she said.

Still, Thomson, who is a proponent of tablets in education, warns that the paperless classroom initiative could impair learning if the technology is considered to be more important than the educational needs it is supposed to serve.

Tablets may be able to sign â€œthe death warrant of the chalk, duster and chalkboardâ€, but it wonâ€™t help if the kids using them canâ€™t read in the first place.

According to a 2012 report by the University of Stellenbosch, 71% of Grade 6 learners in South Africa are considered functionally illiterate; only 58.6% of them are numerate. [PDF]

And if we continue with our current track record, only about half of the kids who enter grade 1 will even make it to grade 12. At least superficially, tablets can provide an introduction to e-skills to learners who many not have had any previous exposure to mobile technology and the internet. But let us be under no illusions â€“ there is a big difference between doing math drills or comprehension exercises on a tablet and learning to code.

So far, there has been little indication as to what exactly these tablets will be used to teach or how, and no one has explained how using tablets â€“ rather than say cellphones at home or PCs at school â€“ will translate into improved e-skills for learners further down the line.

In some overseas schools where tablets have been introduced, educators have found ways to blend their traditional curriculum with ICT, getting kids to code and programme at an early age instead of just being passive receivers of information from a mobile device. At others, tablet use is restricted to a series of apps and digital books.

In the end, technology is no substitute for the personal interactions between teachers and learners.

Nikki Stein, an attorney focusing on basic education at civil rights organization Section27, believes having top-class technology will not make up for the gaping holes in South Africaâ€™s basic education.

â€œThe use of technology is great, accompanied with teachers who are adequately trained to operate it and the right content. Content is already a concern in the current education system,â€ she said.

Stein points out that quality education also means proper nutrition, healthy learners and adequate facilities of sanitation â€“ areas that are lacking in many schools.

A recent audit found that 580 schools in Gauteng need intervention when it comes to sanitation. Many South African children go hungry each day, and school feeding schemes can be inadequate.

â€œLearners with disabilities must also be taken into consideration,â€ Stein adds, â€œHow will blind learners operate these tablets? They still need to learn braille and textbooks are the easiest way.â€

Itâ€™s unclear what sort of training and support teachers will have in order to help them incorporate the tablets into their lesson plans and curricula. The Daily Vox was unable to reach the Gauteng department of education for comment on this issue.

And then there are the issues that only become apparent once the tablets are in classes, in learnersâ€™ hands. In the US, where tablets have been making their way into classrooms for some time now, teachers have pointed out that writing, and having learners be able to show how they got to an answer or arrived at a conclusion, an important part of the teaching and learning process, is not always easy on a tablet, which has no fixed keyboard.

â€œOn some of the pages on the iPad, there is a sketchpad â€¦ But I donâ€™t think it can replace the pen and pencil; theyâ€™re still necessary for maths. I want to see their work, because if the answer is incorrect, I need to see where they made the mistake,â€ said one US teacher, after tablets were introduced at her school.

Others have raised questions about their ability to keep learners on task â€“ working on the app theyâ€™re requested to work on, instead of playing games or using other apps and messaging services.

And then there is the ever-present question of what to do when the tablets inevitably break or get damaged. They may be insured, as the department has assured us, but insurance also costs money.

Wealthy countries that already have their educational basics covered are still debating the benefits of having tablets in schools, which begs the question â€“ are we sure this is what we want to spend our R17-billion in school funding on? – Comic by Nathi Ngubane. All other images courtesy of the Gauteng provincial government Twitter feed