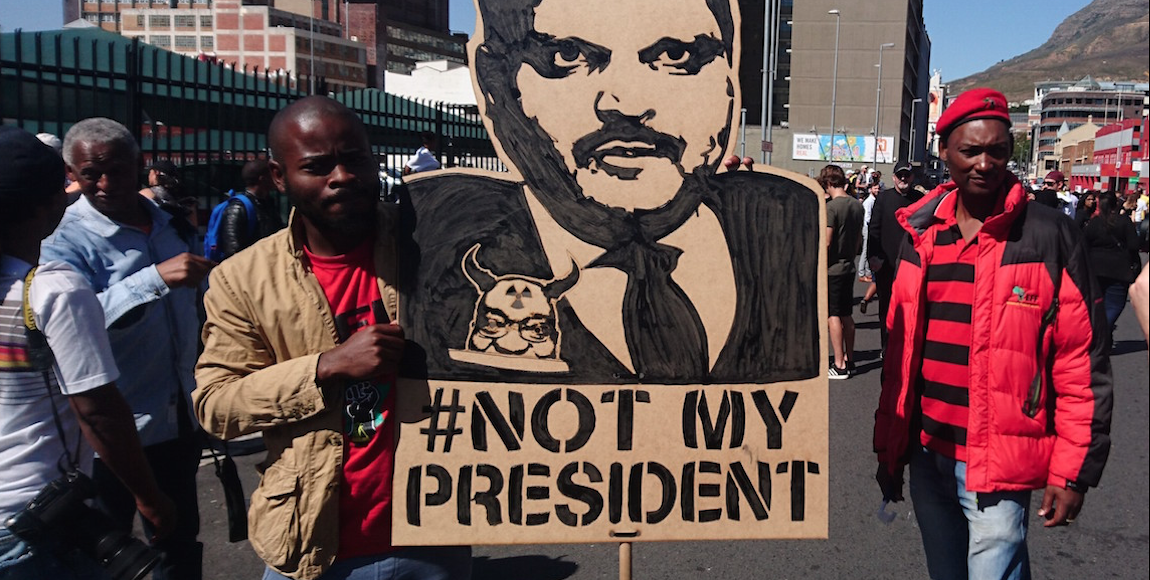 On Sunday, the Sunday Times and City Press published private emails between senior government heads, state owned entities and the Gupta family. The emails exposed how the Gupta family was very much involved in political decisions made by the South African government. The Daily Vox asked some Joburg residents what they made of the revelations and and whether or not they feel that the ANC is still a party worth voting for. Frank Mashigoane, 39, bank teller, Limpopo
This news is an indication that South Africaâ€™s politics are really bad. This goes to show that he is selling us out, the land with its citizens. I am very angry, and I think another #ZumaMustFall march must be called for. He really needs to go. The fact that he wants to leave the country shows that he knows he is guilty of corruption. I don’t think the ANC is still a party worth voting for. Yes, the party saw great leaders like Nelson Mandela, but what they stand for now is not what he stood for. I really think it is time for change in the political structure in terms of which party must take over. The ANC has lost its structure and purpose.

The emails also revealed how Jacob Zuma was planning on relocating to the United Arab Emirates (UAE) with his entire family. Zuma drafted an email to Gupta-owned Sahara Computers CEO, Ashu Chawla, stating that he and his family have decided to make the UAE their second home. However, Zumaâ€™s spokesperson, Bongani Nqulunga dismissed these claims, stating that the president had no intentions of going anywhere Wanda Ndzambule, 21, actor, Roodepoort
I am not really in support of Jacob Zuma as the president, taking into account of what he has done in the past and the news that made headlines this past weekend about him and the Guptas, but I still feel like the ANC is still the best party from the ones we have now. We can’t judge the ANC based on who is in power at the moment. Of course, I am angry, but only at Zuma. We can’t be angry at the ANC because Zuma is not the ANC. Mothiba Joseph, 49, truck driver, Tembisa
This is not good. We must all be angry. How does the ANC allow this man to do this? They also have a responsibility when it comes to running the country. It is their duty to make sure that Jacob Zuma is in line. He cannot continue with this and the ANC not punish him. He needs to suffer for the consequences of his actions. This proves to us that the ANC is not fit for office anymore, they have become too corrupt. This is not right at all.

Jacob Zuma survived his second vote of no confidence by the ANCâ€™s National Executive Committee (NEC), at a closed-door meeting on Sunday, 28 May. Out of 72 NEC members, only 18 supported the motion while 52 were against it. But he came out fighting, threatening the NEC not to â€œpush him too farâ€, because he doesnâ€™t want to â€œharm the ANCâ€. Kgotso Pule, 22, part-time student, Soweto
People fought very hard to get back this country and I donâ€™t understand how someone can just come and give it away just like that. Imagine fighting so hard to get what is rightfully yours, only for someone to disrespect you by giving it back to the hands of oppression? Where is the logic there? And heâ€™s doing all of this for money? I have more questions because I am more confused than angry or anything. Can this man just use his own brain for once? Noxolo Mazibuko, 19, student, Alexandra
This goes to show how selfish and greedy the president is. He is not thinking about the people he is meant to be representing. How do you let other people appoint ministers, but we voted for you to do that. I donâ€™t understand. As for the ANC, I think it died along Nelson Mandela. Itâ€™s no longer what is was when he was still around. Maybe it is about time we give other parties a chance. I donâ€™t want to mention names or anything, but I think we need a break from the ANC in general. ANC ayisafani [itâ€™s not the same anymore], itâ€™s not at the same calibre as it was and people just need to realise and accept that.