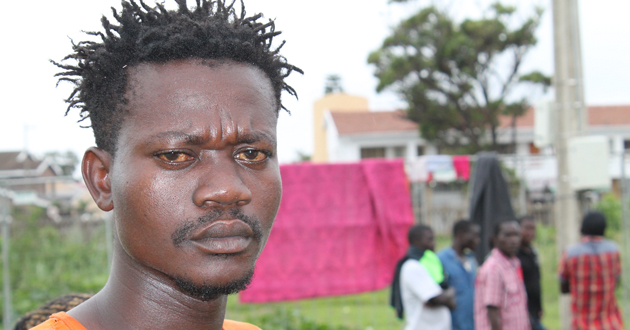 When xenophobic violence erupted in Isipingo and surrounding areas last week, African foreigners were chased out of the suburbs and sought refuge at the police station. There were too many of them to accommodate, so a camp was set up at Isipingo Beach Sports ground. Qiniso Mbili visited the camp and spoke to RAPHAEL FIKIRI, a mechanic from the DRC.

I come from the Democratic Republic of Congo (DRC) and I am a mechanic. I live in Malukazi, a rural area just outside Isipingo, and I work in Isipingo. On Monday morning at around 10am I was at my garage in Isipingo when I decided to go get food at a nearby restaurant. Just when I went outside the garage I saw a mob of about 25 angry men and women.

Before I could make sense of what was happening they started throwing stones at me and one of them said, â€œBamba!â€ (Catch him). One of the stones hit me on the head and the others landed on my clientsâ€™ cars, damaging the body and breaking windows. They were armed with knobkerries, big sticks, broken bottles and one even had a gun, which he fired once in the air. The mob looked murderous and I knew I had to run for my life.

I closed the garage door and ran for my life, leaving the garage unlocked. Some people entered the garage and started looting and vandalising my clientsâ€™ cars while others started attacking the other foreigners that work near my garage. So now there was a group of victims running away from the attackers. We couldnâ€™t trust anyone else in town for refuge so we decided to run to the police station.

In the evening, tired of sitting at the police station, some of us were considering going back to our places, but the police advised against this as there had been reports that the violence had spread to Malukazi, which is where most of us live. At around 8pm the same day, two of the people who I share my house with in Malukazi arrived at the police station, accompanied by hordes of other victims coming to take refuge.

They told me how the violence had spiked there and that our house had been looted. Apparently I had lost everything in my house too. I have nothing right now, not even my passport which I would have risked going back to retrieve because I really want to go back to the DRC.

I am surprised by the amount of hate that South Africans have for other Africans. Back home in Congo, my neighbour is South African; he has been there for years, since I was a teenager. There are many other South Africans in Congo, working and living comfortably there â€“ things like these never happen to them. In my country we donâ€™t even have a name for foreigners, but here they call us amakwerekwere.

I have lost everything now besides the clothes on my back and my phone. My mother called on me Tuesday morning (31 March) crying and begging me to come back home to the DRC. I donâ€™t know how she came to know of the violence, because I did not tell her about it. In 2004 when I came to South Africa, my family was strongly against it. Now that I really want to go home, I canâ€™t, because I have lost everything.

This is not my first time being a victim of xenophobia. When the xenophobic violence spread throughout the country in 2008, I was the first male victim in Isipingo. The most sickening element of this violence is the ignorance shown by the xenophobes. Not all of us come to South Africa because we are poor in our own countries. I love my home country and I lived a comfortable life there until the political wars. I came to South Africa looking for peace; clearly, I chose the wrong country.

Living in a tent like this and eating the kind of food that they serve here is inhumane considering that I am fully able to work and provide for my own self. I donâ€™t know what is going to happen to us next, but I want to go back to my home country right now.