Home Opinion “It should be unlawful to stop brilliant students from completing their degrees...
WhatsApp
Facebook
Twitter
Email
Print 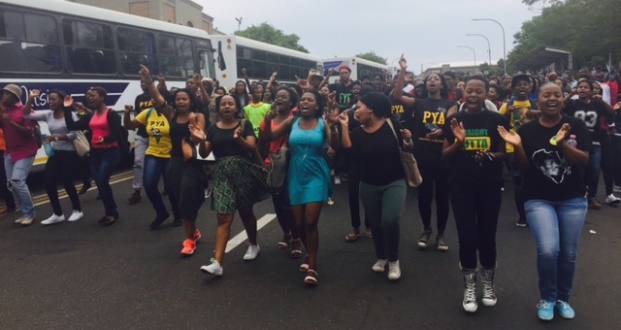 As the protests over Wits University’s proposed fee increases continue, linguistics lecturer GILLES BARO argues whyÂ students and staff who have remained on the sidelines should stand in solidarity with the protestors.

Dear Wits staff member or student who feel entitled enough to complain about the protest or the blockade of campus gates:

You might have experienced a student protest – a real protest, a leader-less outcry of students, workers and staff of Wits University who decided to challenge the announcement of a fee increase. It made you angry and upset because it worked: it destabilised order, it forced people to engage with the struggle and no longer be bystanders.

What these students want is transformation, they want access to education for all, they want to make their university a better place for everyone. They are believers. They make change happen. You should be thankful.

Students arenâ€™t responsible for inflation and the devaluation of the rand, and in a context of neoliberalisation of universities and global poverty, they shouldnâ€™t be the ones being asked to pay for it. Wits management, the vice-chancellor and the deputy vice-chancellorÂ should be actively protesting against government for more funding, rather than asking those already struggling to cough up the difference.

Please do not confront the students, do not intimidate them, do not resort to violent tactics, do not use words such as “unlawful,” “violent” or “inconvenient” to describe their actions.

Violence is having students sleep in libraries and financial aidÂ students being told theyâ€™re not poor enough to receive funding for next year. Violence is the income gap between Wits’ outsourced workers and Wits management.

Inconvenience is walking on roads deemed â€œunsafeâ€ by the university, but which are on the other side of the gates and which are unavoidable for students who are unable to afford motorised transport. Inconvenience is forgetting oneâ€™s student card at home and being questioned by campus security after trying to get into Senate House on foot, even as thoseÂ driving carsÂ are ushered in without beingÂ stopped or checked. Inconvenience is going to a lecture hungry.

It should be unlawful to stop brilliant students from completing their degrees because of a lack of funds.

So leave your car behind, take the bus, WALK, and join in with the marches, protests and blockades, push the deputy vice-chancellorÂ and vice-chancellorÂ to find other solutions, to engage in transformation and to confront the government.

Because what’s the point of coming to work or studying if current students can’t come back next year toÂ finish their degrees?

Gilles Baro is a lecturer and a doctoral student at the University of the Witwatersrand studying the inner-city of Johannesburg from a linguistics perspective.

Enjoyed reading this piece? Please help us to keep doing what we do by donating to our crowdfunding campaign here.