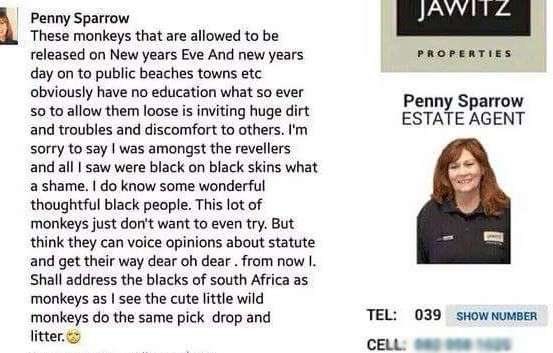 South Africans have had enough â€“ theyâ€™re calling out racists where they see them,Â most often on social media. And racists would do well to check their privacy settings – or, you know – not be racist. AAISHA DADI PATEL explains.

The Big Days are gone, Dezemba has faded into Januworry but damn, Black Twitter’sÂ got no holiday hangover. And the country is all the better for it. Racists all over the country will feel less complacent after the schooling dished out to the likes of Penny Sparrow, Chris Hart and others.

This is how it began.

On Sunday evening, South African actor Hlomla Dandala highlighted a Facebook post by KZN estate agent Penny Sparrow in which she decried the use of public beaches by black people and also, referred to black people as “monkeys”.

Outrage at Sparrowâ€™s comments poured in, and the hashtag #PennySparrow trended for hours.

At the same time, chief Standard Bank strategist Chris Hart tweeted that calls for return of land is the result of a sense of “entitlement”, and referred to such a call as a “poisonous ideology”. Hart also bemoaned the way that â€˜minoritiesâ€™ (i.e. white people) are treated â€“ and questioned the existence of white privilegeâ€¦

More than 25 years after Apartheid ended, the victims are increasing along with a sense of entitlement and hatred towards minoritiesâ€¦.

Poisonous ideologies are flourishing – I have been retweeting some of them. Economies are never built on entitlement but on productivity

The vitriol is expected. All about â€˜white privilegeâ€™ apartheid beneficiary. But nothing about building the economy

â€¦which was ironic, as tweeps pointed out as they questioned how Hart got to the position that he did without (it would appear) having the relevant qualifications.

Funny how wypipo are tip toeing around Chris Hart’s lack of education for what he does. But they always have lot’s to say about Zuma.

Hi @StandardBankZA i see chris has a matric& u made him investment head. I have 2 BSc degrees from wits, iD like to chair your Board. Pls DM

But tweeps had had enough, and were unapologetic in calling out the racism that they were seeing.

Not in the business of praising white people who aren’t racist. I’m not going to thank you for treating me like a human, sorrynotsorry. âœŒ?ï¸

Our friends who were protesting for Zuma to fall are hella quiet right now.

Tired of a system that has long oppressed them, Twitter demonstrated no chill and even made Sparrowâ€™s personal details public.

Another tweep evenÂ paid the Sparrow family a visit.

Sparrowâ€™s daughter Charmaine Cowrie told News24 that she had spoken to her mother, who said that â€œshe didnâ€™t mean anything [by the Facebook post] and she doesnâ€™t understand what all the fuss is about. Itâ€™s just litter, paper on the ground.â€

Sparrow later defended her comments herself, telling News24 â€œI wasnâ€™t being nasty or rude or horrible, but itâ€™s just that they [black people] make a mess. It is just how they are.â€

The BBC, reporting on the furore, angered many with the way that they framed the story in a tweet that was later deleted.

Dear @BBCAfrica, NO it is not black people being on the beach that caused a race row. A racist person did. Thank you pic.twitter.com/5prmPXQsWt

It didn’t, however, end there.

What the hell is happening? Did the white supremacy mothership activate its entire species living among us? pic.twitter.com/kZLU81yMvP Standard Bank, in the meanwhile, saidÂ they condemned Hartâ€™s comments.

Comments by @chrishartZA yesterday are factually incorrect and have racist undertones that do not reflect our values http://t.co/Hjat3ruPaJ

And on Monday afternoon, it was announced that the bank had suspended him.

Chris Hart has been suspended. pic.twitter.com/5qC3toGi9T

Sparrow, a Democratic Alliance member, had charges pressed against her Â by the party and steps taken to suspend herÂ membership. The party also issued a statement condemning her comments.

#PennySparrow Investigation will be of Crimen Injuria for infringing the dignity of all and for dehumanising black South Africans.

But some were wary of the party demonstrating double standards.

I see DA on my timeline denouncing racism. At this rate, Kohler-Barnard would be coming out to condemn #PennySparrow too ??

And wondered whether Hart â€“ also a DA member â€“ would be condemned similarly.

Chris Hart is a member of the DA. He contributes to their economic policies. Will the DA also suspend his membership? @StandardBankZA

And in the meanwhile, someÂ worried about the precedent Hart’s suspension set. Was it fair to suspend someone for expressing views that are the official positions of more conservative parties anyway?

Let’s be real, Standard Bank hasn’t suspended Hart becauseÂ they are fighting racism.Â They are responding to the outrage on social media, and strategically distancing their brandÂ from the crude racism of one of their most publicly visible employees. Because, seriously, Hart’s utterances clearly had racist undertones.

WeÂ can take comfort in the knowledge that South Africa, under the astute leadership of the woke, will be a hostile place for racists. And that can only lead to a better place.

SA should be the scariest place for racists. They must livd in pure terror of losing EVERYTHING for even coughing wrong

Editor’s note: We’ve removed a tweet that contained the personal details of Penny Sparrow as a reader pointed out, Sparrow has already received death and rape threats.Â