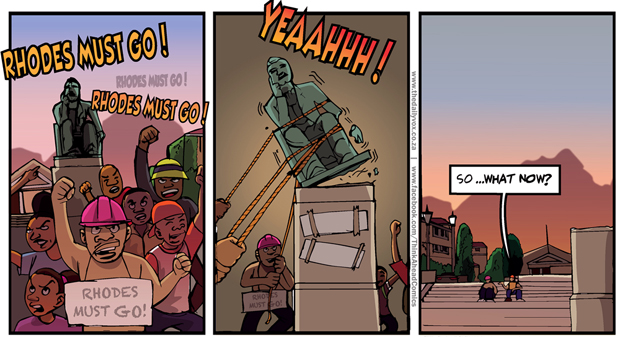 April 9, 2022 marked seven years since the removal of the statue of Cecil John Rhodes from its plinth at the University of Cape Town. The removal of the Rhodes Statue was part of the #RhodesMustFall movement which took place at UCT. Here is how it happened from @thedailyvox‘s archives.

On Thursday 9 April, 2015, the removal of the statue of Cecil John Rhodes took place at the University of Cape Town campus. The removal of the statue followed a month of protests at the university. The protests and movement started on March 9 2015 when Chumani Maxwele threw human excrement at the statue. Maxwele’s dressed in running shoes and tights, a pink construction hat and carrying a whistle, a drum and a placard reading “Exhibit White @ Arrogance U.C.T.”, as he threw the excrement. This act was seen as a protest against UCT’s institutional racism and an appraisal of the lack of transformation on campus.

The removal of the statue of Cecil John Rhodes happened at 5pm on Thursday, April 9. The UCT Council made the decision to remove the statue and Heritage Western Cape issued a permit for the temporary removal of the Rhodes statue from the campus.

Here were some of the options bandied around about what could happen to the statue at the time.

The fate of the Rhodes statue

O March 13 2016, students held a public meeting to discuss the way forward. This is what marked the beginning of the mobilisation against the statue and what it represented. “The statue of Rhodes, they said, had become symbolic of this lack of transformation and of institutional racism at the university”.

Why Martin Luther King Jr would have supported the movement

“We must come to see, with one of our distinguished jurists, that justice too long delayed is justice denied.”

MANDY DE WAAL explains how Southern Africa’s colonial master managed to white-wash his own past to the point where he is – even today – lauded and revered.

Here is what happened after the statue was removed.

Rhodes Must Fall: The movement after the statue

Most recently, UCT approved the renaming of the Jan Smuts residence hall. In 2021, six years after the #RhodesMustFall movement, it was renamed with immediate effect.