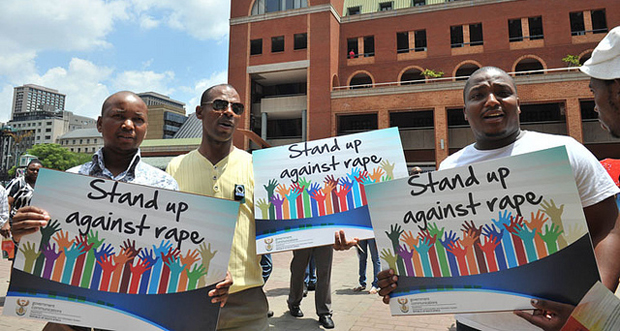 A horrific story of six white pupils raping a black schoolmateÂ with a broomstick has provoked introspection on the way South Africans talk about male rape. Writer and social analyst, Eusebius McKaiser, who is himself a rape survivor, spoke out against the taboo of calling male rape what it is.

McKaiser was asked to do an interview after details of the racially motivated rape of a schoolboy at a Northern Cape school emerged. Despite writing in his book, A Bantu In My Bathroom, about how his cousin raped him when he was seven years old, McKaiser noted that the journalist who contacted himÂ â€œcould not get herself to request an interview to talk about the boy being RAPEDâ€, and instead referred to incidents of â€œassaultâ€ and â€œbullyingâ€.

â€œThe reason for the taboo is, I think, some really, horrendously unfortunate, ideas of what it means to be â€˜a manâ€™. A man does not get raped,â€ McKaiser wrote on Facebook.

According to McKaiser, there is a fear among media, where acknowledging a man is raped is akin to diminishing his masculinity in a similar way to when gay men are called â€œmoffiesâ€. But McKaiser asserts that the mediaâ€™s perpetuation of men as â€œindestructibleâ€ limits spaces â€œfor them â€“ for us â€“ to emote, cry, speak freely, and seek helpâ€, and consequently discourages action against rapists. Thus, McKaiser says, it is vitally important that members of the media begin to talk about male rape.

â€œYou donâ€™t render me vulnerable by doing so. Why? Because, simply in virtue of being human, I already AM vulnerable, capable of being broken, and injured,â€ McKaiser writes.

Alongside the language of â€œbullyingâ€ and â€œassaultâ€, news outlets described the rape of the schoolboy as sodomy. A City Press headline that read â€œSchoolboy sodomised in horror â€˜race attackâ€™â€ was changed to read â€œSchoolboy raped in horror â€˜race attackâ€™â€ after suchÂ headlines drew criticism. A note at the bottom of the article says: â€œThe headline and story have been changed to say the boy was rapedâ€.

Brad Cibane, a South African law graduate and blogger, says that sodomy is the â€œlawful sexual act by two consenting adultsâ€, which has now become a discriminatory termÂ that underpins the â€œentrenchedâ€ homophobia in the country.

For McKaiser â€“ who says his interviewer â€œmercifullyâ€ did not refer to male rape as sodomy â€“ words like sodomy, bullying and assault belie the trauma male rape survivors experience and can never substitute the sexual violation of rape.

â€œMen rape. And some men get raped. Let’s say so, plainly,â€ McKaiser writes.