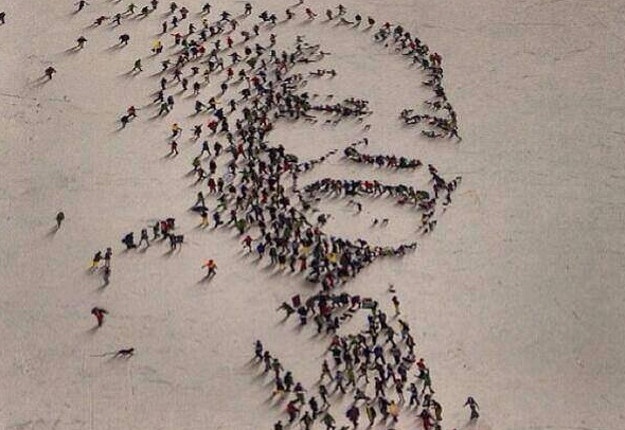 Within hours of Penny Sparrow posting a racist diatribe on Facebook bemoaning the dirty escapades of black people on a Durban beach, she has unwittingly inherited the mantle of public enemy No. 1, until now held by one Jacob GedleyihlekisaÂ Zuma.

Sparrow was not alone on her side of the fence. There was also Standard Bank economist Chris Hartâ€™s tweets about â€œmajority entitlement” and another random Justin van Vuurenâ€™s Facebook post describing black beach-goers as animals.

As outrageous as these posts were, letâ€™s be honest, none of the sentiments expressed by the trio are particularly shocking. Sparrowâ€™s sentiment about blacks misbehaving is really not that surprising and so too, were Chris Hartâ€™s mumblings. All three have merely articulated opinions about black people that are all too common in powerful circles in South Africa.

Let’s not pretend Penny Sparrowâ€™s diatribe is an anomaly.

Growing up in the sunny city of Durban in the 1990s, I remember being told that the beach was a no-go zone at this time of year. Then, as now, busloads of black people would arrive from the hinterlands for the New Year party. Whites and Indians, or those who could afford it, went on overseas holidays. Other privileged sons and daughters of the city who worshipped the sea and sand through the course of the year, moved on politely to other beaches on the north or south coasts to escape the coming â€œinvasionâ€.

Two weeks ago, on a brief holiday to Durban, I visited the beach almost daily. I looked on curiously at a curation of black, white, brown and other coloured skins basking under the sun in the beaches of Snake Park and Addington, or in between. In a world engulfed by complex questions over multiculturalism, identity and belonging, the myriad of colours basking under the same sun felt glorious.

But on closer inspection, little has changed from my childhood.

On the shores of the beach at Snake Park, a black body singing in a bright yellow two-piece suit lounges on the sand close to another in a purple number, nibbling at her man’s neck on the water’s edge. Unperturbed, a brown burka-clad woman, covered from the head to the ankles, splashes her bare ankles and painted nails in the water. Behind her, a white man, homeless by his obvious poverty lies head first on the hot sand, knocked out by a hangover, or hunger, or both. Two young white boys, one with straight, tousled hair like Messi, run alongside their father to the water’s edge, a football at their feet.

No one talks to each other. Like oil and water. There is no whispered acknowledgement of the other, no casual exchange of a smile. No mixed couples, no mixed friendships. Oh wait, I did see a brown girl arriving in a car with two black sisters on my way out.

We keep on saying barriers are breaking, but are they really? Then why am I on the hunt for a sample?

At its core, apartheid was a racial demarcation of â€œpublic spaceâ€.

Sparrowâ€™s description of â€œmonkeys being allowed to be released on the beachesâ€ is born from exactly that philosophy. Like the spirits released in Ghostbusters on to the city of New York, the blacks she saw on beach over the New Year holiday were the ones apartheid had protected the city from all this time.

And yet she is not alone.

Writing in 2007, Biniam Misgun and Wesley Oakes, in an article titled “The White and Black Sands of the Durban Beachfront”, found that people of all races on the beachfront associated certain beaches (like South beach) with blackness, which they then associated with “crime and grime”. In other words, the writers found that the bias transcended a question of race, and into the colonial fear of the dirty, rustic, poor black; they lack civility, and they come in a storm, they seem to say.

“An Indian couple for example, told me that ‘they’ (blacks) had a culture that prompted them to come with their foodstuff and blankets … occupying ‘all’ the space’ and eventually leaving it in a mess,” they wrote.

Youâ€™ll notice this is not very different to what Sparrow said and for that matter what Chris Hart, the economist, said.

Similarly, in its statement on the Sparrow [and Chris Hart] issue, the ANC saidÂ that their comments on social media were damaging our society. “Mr Hart and Ms Sparrow should have knownÂ­ better and should not be allowed to polarize our society.”

But was it not ANC-led government that has repeatedly removed the fishermen from the pier at Snake Park or from the harbour as they bid to develop and beautify the Golden Mile? And forcibly removed informal traders from the city-centre in a bid to gift the labels “clean” and “civilised” to the city for the World Cup in 2010?

The Twitter slaughter of Penny is justified, but she is no more than a symptom of the everyday bigotry against â€œblacknessâ€ in this country.

Take the whispers over the recent failures of South African cricket team as being one immediately linked to the policy of â€œquotasâ€ and “transformation”. None of these claims were investigated; the notion was merely accepted as “most likely fact”. Â It seems commentators conveniently forget that 88% of the country is made up of people of colour. There is little respect shown to the reality that transformation is no longer “an option”, but instead intrinsic to the progress of sport in this country. As a result, success and failure lies heavily on the back of Hashim Amla, a captain of colour who must meet lofty standards, be it in body-language or a style of captaincy, determined by his bullish predecessors. The prophets of doom shadow his every step and no one seems to question what inspires such skepticism in his abilities.

There is a toxic mix of race and class that pervades the way South Africa is structured.

Take a seemingly benign creation like the proudly-South African restaurant Spur.Â  On the surface, a restaurant, home to the legendary 500g T-Bone steak. On closer inspection, itâ€™s also home to a nefarious homage to the â€œAmerican Indianâ€. Here you can eat alongside “Soaring Eagle, Buffalo Brave and Buttercup, a grinning trio of cartoon mascots dressed in animal skins and war paint.” The restaurant is impervious to the problematic imagery of Native Americans. It would seem, so are South Africans.

“With its history of apartheid, South Africa is acutely sensitive to racism among its own population, and has been taking down colonial-era statues at university campuses â€” yet it has a blind spot when it comes to American history,” Erin Conway-Smith, writes in the GlobalPost.

But Conway-Smith’s observation of our peculiar blind-spot is not that contradictory after all.

The willingness of Penny (and Justin van Vuuren below) to shout out their racism, removes the mask. It exposes us all. South Africans are not offended by her views. We are offended by her brazenness. The businesses linked to van Vuuren, Sparrow and Hart apologise because itâ€™s bad for their brand. Likewise, the DA is looking to protect its brand, the ANC trying to seize the moment and the EFF, appropriate their concern for blackness.

It is easy to dispense outrage over someoneâ€™s comments. But how easy is it to question our own biases, see the ways in which we are all complicit?

We allow the above subtleties to fly, not because we like how things are. It’s because we only react to the pain of others if it affects us.