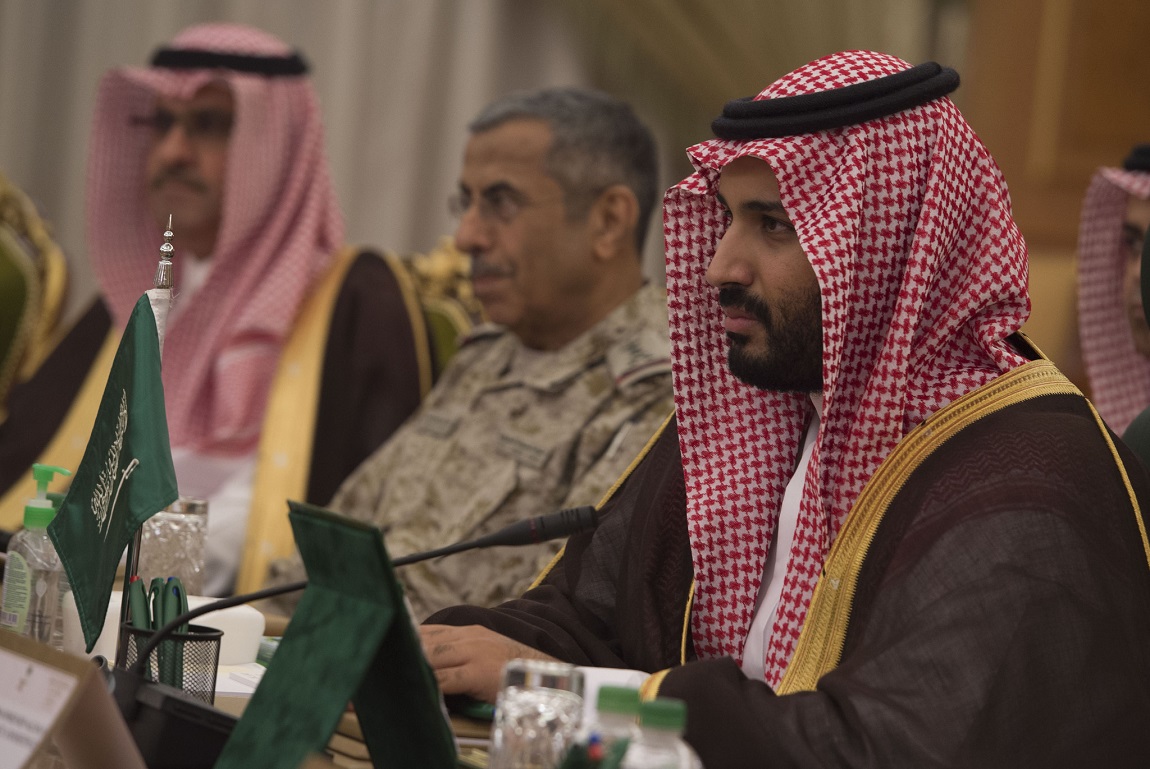 In what has been described as a premeditated murder by Turkish President Recep Tayyip Erdogan, Riyadh’s explanation for Jamal Khashoggi’s death is riddled with inaccuracies. Between pleading ignorance on behalf of the crown prince and trying to clean up the diplomatic shit storm which has ensued, the Kingdom’s top spin doctors led by Foreign minister – Adel Al-Jubeir have been on an aggressive media clean up campaign.

In a cringe-worthy moment, a photo of Jamal Khashoggi’s son shaking hands with Mohammad Bin Salman Al Saud (MBS) as he “offered his condolences” surfaced on social media drawing severe criticism. How does a country which has banned this young man and his family from leaving Saudi Arabia extend a blood soaked hand in condolence for this egregious crime, writes MUHAMMAD SHEIKH.

Khashoggi was not one to mince his words, often criticising the Saudi regime’s disastrous objectives both home and abroad. Despite being apprehensive about entering the Saudi embassy in Istanbul, he did; never to be seen again.

As tragic as this entire story is, Jamal Khashoggi’s death has had inadvertent consequences on global political and regional discourse on Saudi Arabia and it’s march toward “modernisation”. More critical questions are now being asked about the Saudi led aggression in Yemen, the so-called kingdom wide ‘reformation’, the fractures and fragmentations within the royal family and the horribly miscalculated blockade of Qatar. Most of these are manifestations have occurred during the reign of crown prince Mohammed Bin Salman. Perhaps this is to be Khashoggi’s final legacy. Unspoken yet powerful. We may never know the truth of his murder but it has exposed further deep rooted political divisions within the monarchy and shown a crown prince so consumed with power that in a desperate attempt to crush dissent and prove he can rule, all we really see are his own insecurities revealed.

The forced rendition of dissidents abroad by the Saudi regime (and to be fair many governments) is nothing new. Just as the Republican party has become a personality cult for Donald Trump, Saudi Arabia represents the same for MBS as he imposes his will with ruthless impunity. US president Donald Trump has called the killing of Khashoggi, “the worst cover-up ever” while defending the United States multi-billion dollar arms deals with Saudi Arabia. Hardly surprising.

In a narrative which reads like a b-grade spy novel it’s not difficult to think that sooner rather than later the alleged 15 man hit squad tasked with carrying out the grisly crime will have outlived their usefulness and will be eliminated as well. It’s said that in a conspiracy, all loose ends are trimmed.

“The Saudis parcelled up his (Khashoggi’s) remains, placed them in a van, and then proceeded to the consul-general’s house 500 meters away for dinner. It was a meal to celebrate a mission accomplished”

The global reaction to Khashoggi’s murder has prompted varied responses. Predictably Jordan, the UAE and other GCC partners threw their weight behind Saudi Arabia’s initial plea of ignorance, which was expected. Germany became the first Western government to suspend future arms sales to Saudi Arabia, which will not last, and the United States has promised a “tough punishment” for those found responsible, which will never happen.

To an extent justice for Jamal Khashoggi and journalists imprisoned and murdered across the world has to be achieved through the pen and a free press. To rely on an ineffectual global justice system is equal to burying one’s head in the sand. In order for his death to mean more than a front page scandal, journalists who do what they do every single day have to continue confronting the monsters in the closet and speak the truth to power even if it ends badly.

While the gruesome reality is that Khashoggi’s body could be floating somewhere deep beneath the Bosphorus, or be buried in the forests of Turkey, his family and friends still seek closure. For any country to act with such brazenness, such blatant disregard for the rules of a sovereign state is a clear slap in the face not just to Turkey, but to global sensibility (wherever it still exists). Two questions remain. First, who killed Jamal Khashoggi and second, where is the body hidden?

The diplomatic tailspin has produced differing theories of both the global and regional implications of this senseless tragedy. The suggestion that too harsh a response from the United States could illicit a turning point in US-Saudi relations, effectively pushing the kingdom into the arms of Iran is far too premature. While some analysts feel it may be plausible to some extent, the Saudi-Iran rift will not simply disappear because of some harsh language from US leaders, particularly a president known for his flip-flop approach to foreign policy. The Yemen proxy war, the kidnap and forced resignation of Saad Hariri, reneging on the JCPOA and ofcourse an issue as old as time itself, the Sunni-Shia split all ensure that toasting to a mutual accord is definitely not on the horizon for Riyadh and Tehran any time soon. The House of Saud and the United States have been in bed for far too long and spawned far too many dubious collective interests to call it quits over the death of Khashoggi. When this relationship does break, it will be done in cataclysmic style.

Khashoggi did not deserve to meet his end in such a terrible way. His life may be over but his death has become a symbol of something far greater. The Saudi monarchy have done a fantastic job of creating more enemies than allies and their eventual disintegration contrary to their own paranoid delusions may very well occur at their own hands.

Editor’s note: Jamal Khashoggi’s son Salah bin Jamal was permitted by the Saudi government to leave the country for the United States on Thursday, according to CNN.

Muhammad Sheik is a Current Affairs Producer/Presenter at Cii Radio and is currently studying towards his Masters in International Relations. He reads a lot, sleeps a little, and never forgets to stop and smell the roses.