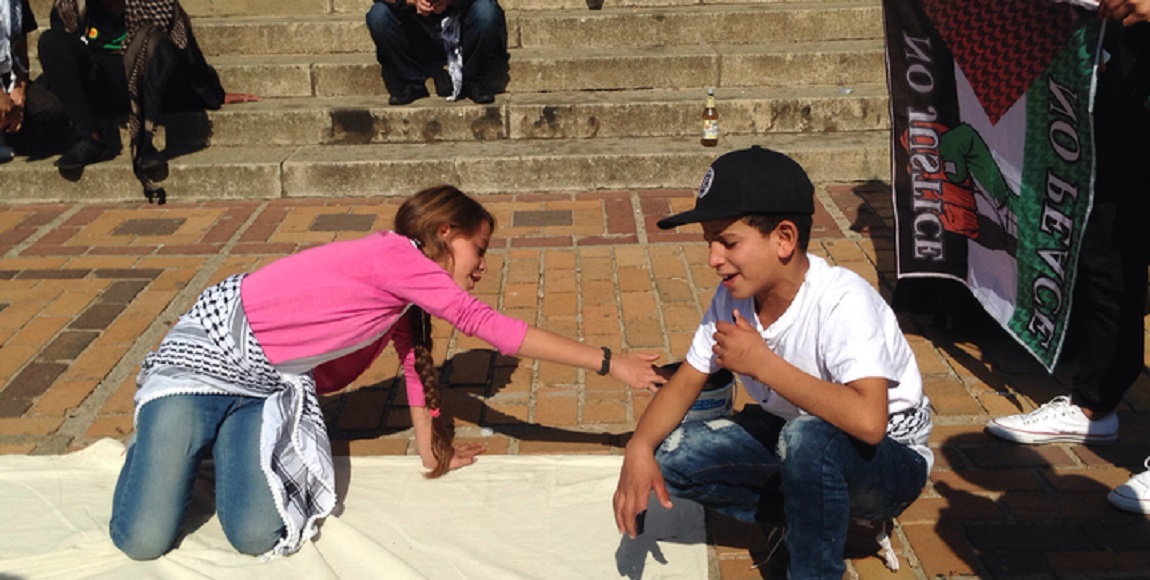 Eleven-year-old Janna Jihad made headlines in 2016 when she began reporting on the injustices that Palestinians were facing in Jerusalem, Hebron and Nablus. She has managed to reach a sizeable audience documenting the everyday oppresions of Palestinian people. Accompanied by her uncle, Bilal Tamimi and other Palestinian child activists, Jihad visited South Africa as part of the Shamsaan (Two Suns) Children of Palestine Tour. The Daily Vox team spoke to the young activists.

On Friday afternoon, the children visited the University of Witwatersrand for a tour of the campus and a meet-and-greet. The trio of children – Janna Jihad, Ahed Tamimi and Muhammad Nawageh – painted a banner on the piazza outside Robert Sobukwe block. Representatives from various student organisations such as the Palestinian Solidarity Committee, Muslim Students Association and Amnesty International Wits addressed the crowd.

Young Palestinians Janna Jihad and others are visiting Wits. pic.twitter.com/0iRUygAdXW

Calls for a Free Palestine from the children. pic.twitter.com/Kr4t4zcngo

Jihad briefly addressed the crowd gathered on the piazza, saying she doesnâ€™t want to talk a lot because she needed to get back to drawing. However, she spoke about the bravery that Palestinians face under occupation.

â€œIn Palestine we believe that the bullet that doesnâ€™t kill you, makes you stronger.â€

Ahed Tamimi, 16, spoke about the role of women activists in the struggle saying that women are the main force. She also said behind every successful man is a woman.

Ahed Timami talking about the role of women in activism. pic.twitter.com/0eihwkhlzu

Jihad told The Daily Vox she is enjoying her time in South Africa, playing and swimming.

But of her homeland, she said: â€œWe in Palestine are in a very bad situation; please help us because we are living under apartheid. So I would like everyone to support us.â€

Janna Jihad speaking about her trip to SA. pic.twitter.com/6PGC5vDyC6

Like a typical child, Jihad is undecided about her future saying she wants to be journalist, football player and fashion designer. She says Neymar Jr from Barcelona is her favourite football play.

Janna Jihad who wants to be a footballer shows off her skills. #FreePalestine pic.twitter.com/xKvK6Ekmn0

The children ended off their meet-and-greet on the piazza with a game of football with some of the Wits students.