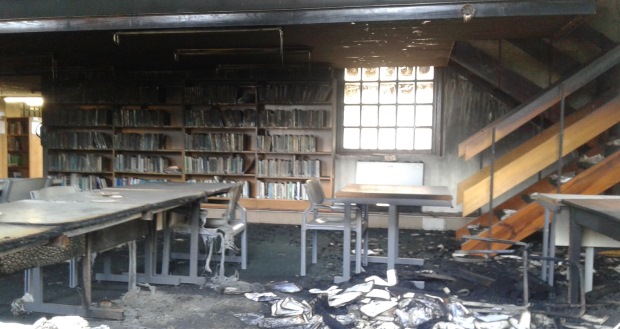 JARED SACKS asks us to suspend our anger, judgement and moralising over the burning of property at UKZN this week, and ask why someone would burn the same library that they use to get the education they seek.

Once again protesters have gone and done it. Theyâ€™ve done the unthinkable. Theyâ€™ve burned shit down.

This time, they have not burned just anything. They did not burn down a traffic robot, a few school desks, or a corrupt ANC councillorâ€™s home. They did the unconscionable act of burning a university library. The library is an institution that has gained near divine status in our society. Beyond the historical implications of burning books as a form of fascist or totalitarian censorship, books are seen as the key to unlocking the doors of knowledge for the elite and poor alike.

And they did not just burn any library. They burned a university library with rare old books, colonial and post-colonial titles with regressive and progressive politics. As has been pointed out, even the colonial books are of significant value to our society and, in particular, for researchers wanting to understand the history of apartheid, how the law was used to buttress it, and how the conditions were met for people to resist such oppression. There is no doubt that libraries have a significant social value in our society, especially for those too poor to purchase overpriced titles at Exclusive Books.

When protesters burned down the 85-year-old Howard College law library at UKZN on Tuesday evening it quite rightly upset a significant number of people. Condemnation abounded, especially on Twitter and Facebook and in media reports. The SRC was obliged to condemn the act, putting into words what a lot of supporters of the students were thinking: â€œI want to categorically state that we as the SRC are against any form of burning. That infrastructure is used by us and benefits us. If you burn an institution of higher learning you are disadvantaging a black child especially. They are the people who need it the most,â€ said SRC president Bandile Majola.

Let us not deny the value of libraries. It is certainly not a good thing when any type of social service, particularly a library, is destroyed.

But let us also suspend our anger, our judgement, our moralising, and ask why? Why burn the same library one uses to get the education she or he seeks?

Here are three theses on why a group of protesting students did not engage in arson and three additional theses on why they, perhaps, did.

Dispelling assumptions on why students burned the law library

1. Students did not do it because they hate books or hate libraries in general. It was not an act of censorship, or an attempt to deny people an education. It was not, in and of itself, an anti-intellectual act. The students are, after all, at UKZN because they want to learn.

2. Students did not burn the library because of delusions of grandeur or because they thought it would spark a revolution. It was not a project to bring about an entirely new society. This may be the ideology subscribed to them by some supporters, but that was not the driving force behind the act.

3. Students did not do it because they are acting irrationally. Did they act incorrectly in terms of the needed tactics for achieving the said goals? Perhaps. Were such actions irrational? No, they were not. We know this because within a liberal democratic order, the burning of property achieves the kind of visibility for the cause that other acts of protest do not.

Some of the underlying reasons for the protests as a whole are clear: students want free, quality, and decolonised education for all. They believe it is their right and feel that they must take whatever actions necessary in order to achieve that. This is part of the general alienation that black students â€“ both those that cannot afford the fees and those who are part of the precarious so-called â€œblack middle classâ€ â€“ feel in an ostensibly de-racialised democracy where, because of their race, they still are treated like second-class citizens.

Still, while this explains the protests, it fails to help us understand why a few individuals (because it wasnâ€™t all the protesters) decided to burn the library.

Here are some thoughts on why they may have done it

1. Ownership.
Whether explicitly or not, the students donâ€™t feel a sense of ownership over the university despite it being a public institution. While they do pay tuition fees, they are not involved in any of the substantial processes of decision-making at the university.

While the SRC is meant to represent the interests of the students, it does not actually have any executive power to carry out those interests. And, in the majority of South African universities where the SRC is merely an egoistâ€™s popularity contest or a careeristâ€™s strategy to augment future CVs, the SRC often doesnâ€™t play even that basic role of representation either. In both cases, it is no wonder the students themselves feel disenfranchised. Letâ€™s face it: the university is not a democratic institution despite its use of SRCs and Academic Senates to posture as one. Until these universities are democratised, students will not feel like the university is theirs to protect.

2. Disruption.
Anyone who understands how capitalist institutions work, understands that disrupting the natural workings of such institutions puts pressure on its managers, directors, and on politicians to listen to peopleâ€™s demands. The same is true of the university which, even though barred from making an official profit, cannot continue to function profitably when disruption takes place. This is why at the height of last yearâ€™s #FeesMustFall mobilisations, when most of South Africaâ€™s universities were closed down by student protests, the ANC was forced to yield to some of the studentsâ€™ demands.

Disruption is a key strategy of the oppressed, and the burning of the library, however counterproductive it may seem to us, was certainly understood as a disruptive tactic by the students who engaged in it.

3. To be heard.
This brings us the third and most important reason some students decided to up the ante and burn the law library. The students were quite obviously being ignored. In its recent iteration at UKZN, students have already been protesting for three whole weeks. (We should, of course, note that students at UKZN have been protesting without a long-term resolution every year since 1994). During that time, they have not only been ignored by the vice chancellor, but they have been treated with contempt â€“ as if the entire protesting student body were already de-facto criminals.

Collectively punishing the protesters by calling the police is itself an act of violence. In case one isnâ€™t aware already, the police arenâ€™t quite the negotiating types. Not only do they not have the power to negotiate with protesting students over their demands, but their existence is first and foremost based on the utilisation of violence to protect the power of such institutions.

You donâ€™t engage with protest by recourse to violence unless you are willing to gamble that the whole thing could explode. How can we not recognise that the rape of a student protester by police is enough to spark the fury of students, at not just the police but also the university managers that called them?

UKZN SRC president Bandile Majola explained it this way: â€œThey have assaulted and shot at students. The sad part is that media itself is not honest. When security and police are terrorising students there is no reporting. But when a building burns down they are there and publishing that.â€

In other words, not only have the students been ignored, but they also recognise that the only time they are heard is when they burn shit down.

So if we are to criticise the students, let us at least be fair to them: they are acting from a position where the only avenues available to them are to disrupt the natural workings of the university in order to be heard. They have no other recourse that is effective. They have no other way to assert their collective power.

If we truly want an end to library burnings, the only way to achieve that is to start listening to the students and begin to democratise the university as a whole. As long as students have no real institutional power, as long as they remain disenfranchised, mistreated and ignored (the symbolic power of the SRC is not sufficient), the burnings will continue.

Let us not act in bad faith when, as philosopher Lewis Gordon explains, black people make an â€œillicit appearanceâ€ in an anti-black society. Of course, for those in power, their appearance will always be deemed violent. To rephrase Gordon, a person in bad faith may at the same time demand an ideal subject of the student protester where this is impossible and yet make excuses for the institutional violence of both police and the university. This kind of double standard may be a given among the mainstream media and its viewers, but for anyone who claims to support the call for free and dignified education, bad faith is something we must do a better job guarding against.

Condemning the students will not prevent the future burnings. It will only further criminalise and heighten the stakes for those who resort to such acts. As we know, the anger of someone backed into a corner can go in many different directions.

Jared Sacks is a PhD candidate at Columbia University. He previously worked as a freelance journalist, writer and founder of a childrenâ€™s non-profit organisation.