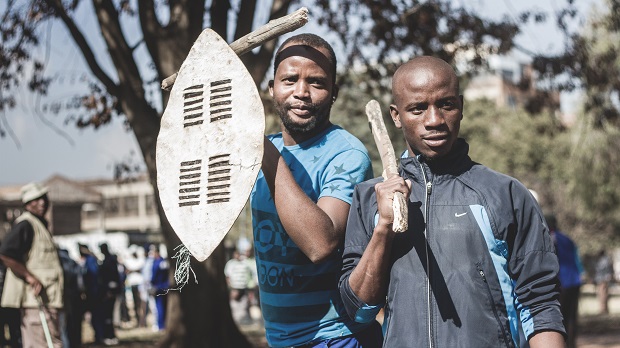 Residents of the infamous Jeppe hostels are protesting against a lack of service delivery, and they feel government has suspended services in an attempt to shut down the hostels. MBALI PHALA visited the Wolhuter hostel in Jepestown.

Sewage water trickles past the feet of residents at the entrance of the Wolhuter hostel. Residents shrug off the smell and walk over the rancid streams in the hostelâ€™s pathways. Piles of rubbish bags are dumped into one corner of the hostel, a refuge for flies and maggots. Even without entering the hostel, itâ€™s clear that the hostel is a health hazard to its residents. Residents say service delivery to the Denver, George Goch and Wolhuter hostels was suspended in March.

Approximately 10, 000 people live in the Wolhuter menâ€™s hostel alone, with less than 1, 000 communal toilets and even fewer communal taps. Each dorm is occupied by at least four men and others by a maximum of eight, with a kitchenette and an open space divided into rooms.

A spokesperson for the department of human settlements, Mogomotsi Mogodiri, however rubbished claims that services were cut off to the hostel residents.

According to Mogodiri, a 12-month contract for cleaning services at the hostels had expired in March and the department has approved its extension on a month to month basis. This will allow services to continue while the department sources service providers to be appointed for another 12 months.

â€œDue to budget constraints, instead of cleaning of the common areas five days a week, the department instructed the service providers to clean two times each week as this would still be enough to keep the hostels clean,â€ Mogodiri said.

Mngomezulu however, believes that the suspension of basic services is an attempt by government to shut down the hostel because of the crime and violence associated with hostels. â€œThis is not the hub of violence or crime and weâ€™re not hooligans. Itâ€™s unfortunate that the media portrays us as angry mobsters that are about violence,â€ he said.

Last Friday, residents of the Denver, George Goch and Wolhuter hostels, known collectively as Jeppe hostels in Jeppestown, near the Johannesburg CBD were stopped by police when they attempted to gather at the City of Joburgâ€™s offices to demand waste management and maintenance services to be reinstated at their hostels.

#Jeppestown A heavy police presence as large group of hostel dwellers are gathered next to Gus Street. RDT pic.twitter.com/1GQa188rha

â€œWe were not even protesting or striking like itâ€™s been reported, we were just walking to the municipality offices as residents,â€ Mngomezulu said. â€œBut because weâ€™re known for being â€˜violentâ€™ the police stopped us before we even got there. Our intention was not to fight with anyone or whatever, we just wanted to know why we have been without services for the past months.â€

Sanitation and maintenance of the hostel are just some of the reasons Mngomezulu and other residents cite for taking to the streets. They had originally given the City seven days to reinstate services to the hostels but after talks with government officials and the hostel chiefs, an extension was granted to the local government to resolve the matter.

This Â has not been the first time this year that hostel residents have protested.
Earlier this year, residents of the George Goch hostel torched a car and a truck during a protest over demarcation dispute. Residents said they had not been consulted about the hostel being incorporated into another ward in the south of Johannesburg, which would be a disadvantage to them as they would be placed at the bottom of the wardâ€™s RDP beneficiary list.

â€œThings happen and weâ€™re not consulted or included in the decision process. Maybe they think weâ€™re uneducated and canâ€™t think, but theyâ€™re mistaken. Many of us here finished high school and were forced to look for jobs instead of going to tertiary institutions because of finances and the responsibility to look after our younger siblings,â€ Mngomezulu said.

What is clear is that hostel residents feel ignored by government.

â€œWeâ€™re just upset that weâ€™re neglected. No one will just be up in arms over nothing or for no reason,â€ Mngomezulu said.

Another resident, 23-year-old Mdeni Gabuza, feels that the absence of women and children at the hostel diminishes its significance in the eyes of government. â€œWomen canâ€™t live here, it would cause the deaths of many people in the hostel. It would be very problematic because women would be the root of the violence that happens within the hostel,â€ said Gabuza, who was recently retrenched. Unemployment is rife in the Wolhunter hostel.

Mngomezulu, who moved to the hostel from KZN to be closer to job opportunities, is also unemployed. â€œI havenâ€™t had permanent employment since I came here from KwaZulu Natal but the part-time jobs and my family plus the other men I came with from back home get me through,â€ he said.

Both men feel they survive the hardships of unemployment through the sense of community established at the hostel. â€œLiving here just makes so much sense because Iâ€™m within a walking distance from places of employment,â€ Mngomezulu said.

As the sun dips further west, the two men join a circle of their friends sitting at a vendorâ€™s outlet outside the hostel. As they wait to be served tripe and inhloko (cowâ€™s head) by one of the few women allowed inside the hostel, the current impasse at the hostel looks set to remain unresolved.