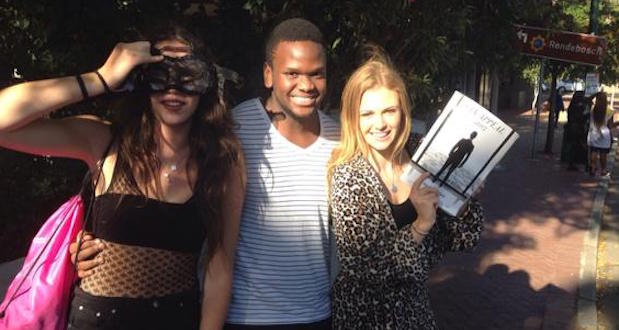 It is that time of the year again, when students at the University of Cape Town (UCT) get heavily drunk and take to the streets of Cape Town to sell SAX Appeal Magazine. This age-old tradition is part of UCT RAGâ€™s fundraising â€“ selling the satirical magazine to as many people as possible overnight and in the wee hours of the morning to raise money for Shawco, a health and welfare charity organisation run by students. Although the overall reaction to the cover is one of pride and approval, not everyone was sold on this â€œsatiricalâ€ cover.

What idiots decided this cover for sax appeal was ok? A white man, holding a whip and looking over the ct townships? pic.twitter.com/uo468HZ8el

#SAXappeal white man carrying “whip” (implying forceful dominance) looking down on blacks in shacks – or is it me? Am I being too serious?

This is not the magazine’s first controversial or offensive cover. In 2009, there was an uproar about cartoons featured in the magazine that were deemed blasphemous towards Christianity, including a cartoon of a woman with her legs lifted up shouting â€œPervert!â€, with the caption â€œGod sees everythingâ€.

Itâ€™s strange that a magazine that raises funds for Shawco, an organisation that operates predominantly in townships, would use such an image on its cover.

In recent months UCT has also come under fire for the lack of transformation within the institution and then this happens.

What do you make of the Sax Appeal magazine cover? Let us know in the comments section below!